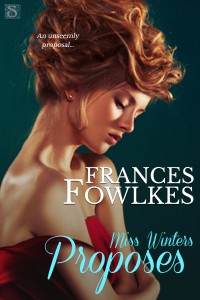 Truth be told, I have never seen an English Pointer.

Sure, I’ve seen them on YouTube a gazillion times while researching the mannerisms and features of the beloved hounds for my dog-centric historical, Miss Winters Proposes, but I haven’t actually viewed one in ‘real life’.

I tried to remedy this great travesty by calling a nearby breeder of the infamous bird dogs. But alas, it was hunting season and the dogs were busy. Well, that, and the heavy skepticism in the breeder’s voice lent me to believe that they really didn’t think a romance writer could possibly be interested in writing about bird dogs, regardless of my insistence to the contrary.

Which begs the question, why not write about a breed that I’m more familiar with, like the standard poodle? I interact with one on a daily basis. I know the breed’s quirks and eccentricities, and I even have a standard poodle breeder on my speed dial (who just happens to be my sister’s business partner).

But despite the poodle’s prominent presence in Regency England, and the fact that my pet standard poodle comes from a kennel of champion water fowl retrievers, I didn’t think people would be as receptive to the idea of a poodle being an earl’s hunting companion as they would be to a more popular bird dog like the English Pointer.

Believed to have first been developed in Spain, the intelligent, affectionate, and exceptionally loyal English Pointer was brought to England in the mid seventeenth century. They were crossed with Foxhounds and Bloodhounds for scenting, Greyhounds for speed, and Bull Terriers for tenacity, thereby making the English Pointer the world’s finest in upland bird dogs.

And while I have never had the pleasure of petting an English Pointer and admiring their pointing skills first hand, I look forward to remedying that soon with a trip to that local breeder with a copy of Miss Winters Proposes in hand.

Find out more about Miss Winters Proposes
Only $0.99 for a limited time!

Behind the Book with Jess Anastasi

Behind the Book with Coleen Kwan