We’re so excited for our new release, Mustang Sassy as it deals with something we all dread and hate… break ups. On the one hand, it can be good to dump all that unwanted weight of a cheating boyfriend. But being the dumpee? *Shudders* That’s when things sometimes go bad. It got us to thinking. Everyone has a worst break up story, and so we are challenging you to share that story. The worse the better, hold no punches… Although it may be tough to beat Sass’s story, so good luck!

Share your worst break up story in the comments below! Entries will get 10 extra points in the giveaway below for a kindle paperwhite.

In the meantime, we’ve got a story of our own from Casey. She’s kicking things off with her worst break up story. It’s the story of how she broke up with her high school boyfriend…

“My senior year of high school, I started dating my friend’s older brother. (Yeah, I was the cool high school student dating a college boy.) He was so sweet and attentive, never pressured me to do anything – basically, he was perfect and I was content. I wasn’t in love with him, by any means, but I did enjoy hanging out with him. (Hint #1 that the relationship was doomed.)

Well, one night just over two months into our relationship, I was talking about where I wanted to go for college. A Very Important decision for all high school seniors. I told him that I didn’t want to stay in our small hometown and go to the same university as him, but would rather go somewhere else in the state. Where? I had no idea. I hadn’t even started the applications for any school. I was being like almost every other teenager, saying I wanted to leave and travel. Being the perfect boyfriend that he was, his response was, “Okay, I’ll transfer schools and move with you.”

Let me reiterate that we’d been together for about two months, I was not in love with him, I had no idea where I wanted to go, let alone been accepted anywhere and apparently, I have commitment issues. After the date was over, I went home and cried to my mom for over an hour about how weird/crazy/holy-crap-what-just-happened that conversation was. (Huge hint #2 that the relationship was DOOMED.)

I didn’t break up with him then, like I really should have, but we ended up dating for two more months. You know how when you’re mad at someone and suddenly everything they do is awful? That’s pretty much what happened to me. He was still being oh, so perfect and helpful. He tried helping me work on applications for schools (the whole time talking about great the two of us together in a new city would be), he tried helping me study for SATs, and he tried helping me work through a fight with my sister. Nope. I wasn’t having any of it. (Hint number 3 that the relationship was doomed.) There were many other little things that really annoyed me as well, but I won’t go into that.

Finally, one day, we went to a bookstore and I couldn’t take it anymore. I did the completely cliched “It’s me, not you,” line and everything. And he started crying. Crying. I felt soooooooooo bad. It got worse when he started telling me that I was his one true love and he would never find anyone like me again and how could I do this to him? We were great together! Oh yeah, I felt horrible. But I knew staying with him would be worse.

Now, before you condemn me for breaking his heart, I want to add that about three weeks later (maybe less), he started dating a new girl. And according to his sister, (whom I’m still friends with) they’re thinking about getting married now, all these years later. No, I wasn’t the love of his life, but apparently she is. Also, even more ironic, I stayed in our small hometown and went to college there for two years before I was finally able to move out. So, even if we had stayed together, there would have been no need for him to move across the state with me. 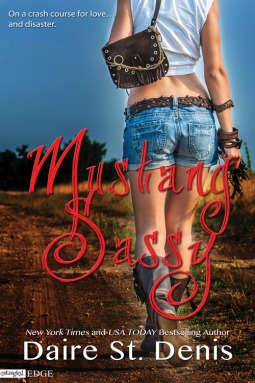 When Sass Hogan catches her boyfriend slow-dancing and doing the tongue-tango with Tori Double-D-Cup Hunter, she pays him back the only way she knows how—by taking a tire iron to his beloved ’67 Mustang Fastback. There’s only one problem. She’s destroyed the wrong car.

Jordan Michaels wants his car fixed, now, and he wants Sass’s auto body shop to do it.  But the handsome blond has a secret−he’s really Jordan Carlyle of Carlyle’s Classics, Hogan’s biggest competitor, and he’s determined to prove himself to his family.

As Sass and Jordan get to know each other, the depth of the attraction has them falling in love. But a relationship based on lies will only leave them primed for the worst wreck of their lives.

Behind the Book with Donna of the Dead Author Alison Kemper

‘Tis the season for love and indulgence. Whether you are coupled up, happily single, or somewhere in…

The journey to discovering what Genre you should write in can be a little bumpy. This …