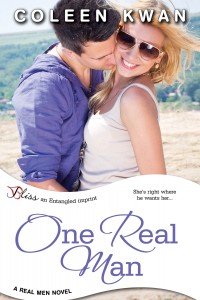 While I was plotting ONE REAL MAN I spent many happy hours trawling the internet for pictures of pools, specifically indoor pools housed in conservatories. You see, the indoor pool plays an important part in my story. It’s where my main characters, Owen and Paige first meet at the age of sixteen. Paige Kerrigan is the gorgeous, spoiled, pampered, secretly insecure teenage daughter of the wealthy and well-known Kerrigans, while Owen Bellamy is the Kerrigans’ caretaker’s son, who is given the chore of keeping the indoor pool clean.

Owen, a brooding, monosyllabic teenager, is instantly smitten with the beautiful blonde Paige. Paige is equally attracted to him but fights her feelings. It’s one thing to tease the cute pool boy in front of her queen bee friends, but it’s definitely not okay to lose her head over the hired help. A combination of desperation, meanness, and insecurity lead to Paige behaving very badly and Owen taking the blame. Needless to say he’s not impressed with her!

Years later, the pool plays its part in bringing them together again, only this time the tables are turned when Owen catches Paige skinny dipping in the pool. He sees her boobs, but so have thousands of others around the world. Yes, Paige has definitely hit rock bottom, but she still has the power to needle Owen.

This fictional pool conservatory was my favorite setting while writing this book. I doubt I’ll ever be able to afford a real one, but I do love visiting my imaginary one.

Find out more about One Real Man
Only $0.99 for a limited time!

Behind the Book with Frances Fowlkes

The 2015 CMA Awards had many memorable moments but which stood out in your minds? Our three moments …

Who doesn’t love Butternut Squash in the fall?  It’s a symbol of changing weather and a …