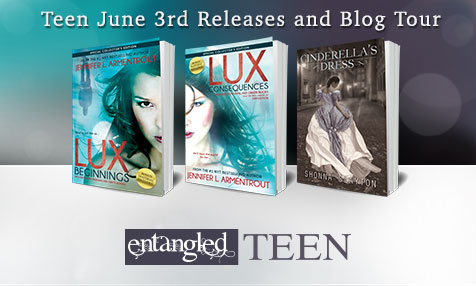 It’s here! Today is the day you can get the beautiful new bindups of Jennifer L. Armentrout’s LUX Series and Cinderella’s Dress by Shonna Slayton! Are you as excited as we are?

When we moved to West Virginia right before my senior year, I’d pretty much resigned myself to thick accents, dodgy internet access, and a whole lot of boring…. until I spotted my hot neighbor, with his looming height and eerie green eyes. Things were looking up.

And then he opened his mouth.

Daemon is infuriating. Arrogant. Stab-worthy. We do not get along. At all. But when a stranger attacks me and Daemon literally freezes time with a wave of his hand, well, something…unexpected happens.

The hot alien living next door marks me.

You heard me. Alien. Turns out Daemon and his sister have a galaxy of enemies wanting to steal their abilities, and Daemon’s touch has me lit up like the Vegas Strip. The only way I’m getting out of this alive is by sticking close to Daemon until my alien mojo fades.

If I don’t kill him first, that is.

When he set out to prove his feelings for me, he wasn’t fooling around. Doubting him isn’t something I’ll do again, and now that we’ve made it through the rough patches, well… There’s a lot of spontaneous combustion going on.

But even he can’t protect his family from the danger of trying to free those they love.

After everything, I’m no longer the same Katy. I’m different… And I’m not sure what that will mean in the end. When each step we take in discovering the truth puts us in the path of the secret organization responsible for torturing and testing hybrids, the more I realize there is no end to what I’m capable. The death of someone close still lingers, help comes from the most unlikely source, and friends will become the deadliest of enemies, but we won’t turn back. Even if the outcome will shatter our worlds forever.

Together we’re stronger…and they know it.

Being seventeen during World War II is tough. Finding out you’re the next keeper of the real Cinderella’s dress is even tougher.

Kate simply wants to create window displays at the department store where she’s working, trying to help out with the war effort. But when long-lost relatives from Poland arrive with a steamer trunk they claim holds the Cinderella’s dress, life gets complicated.

Now, with a father missing in action, her new sweetheart shipped off to boot camp, and her great aunt losing her wits, Kate has to unravel the mystery before it’s too late.

After all, the descendants of the wicked stepsisters will stop at nothing to get what they think they deserve.

I was a single mom for eleven years before I married my husband on a beach in Hawaii. We have…

It’s release day, and that means new Indulgence books for you to Indulge in.  Get those eReade…