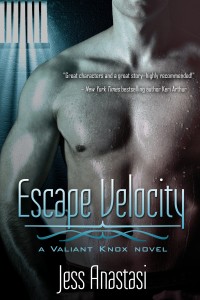 When I sat down to write Escape Velocity, I had no idea what I was getting myself into…

Like many of my books, I started with a single seed of an idea; I’d had a dream (as I often do) of a man in a ragged military uniform sitting in a dark cell staring at a wall. I had no idea who he was, where he was, or why he was there. But this single snatch of scene was enough to get me writing the opening pages.

It’s not unusual for me to write blind with absolutely no clue where my characters are going to take me or how the book is going to end, so Escape Velocity was no exception. The only thing I knew was that I wanted this book to be a novella; I was going to write it hard and fast, because I had other projects I was working on that I thought were more important at the time.

Once Escape Velocity was finished at a mere 17,000 words, I sat on it for ages. I was submitting and publishing other things, and wasn’t quite sure what to do with it. I’d written it for the enjoyment, more than an aim to sell it anywhere, so it stayed on my computer while other projects came and went. The other issue was that I’d tried submitting other sci-fi romance to other publishers in the years before, when sci-fi romance wasn’t really a thing yet. I was continuously told my books had too much romance for sci-fi readers, and the sci-fi was too much for romance readers, so they didn’t know where to “shelve” them. I kept getting “good” rejections, but they were rejections nonetheless and I wasn’t ready for another go on the submission merry-go-round.

On the other side of things, I’d been watching Entangled for years as they built up their authors and brand, and knew I wanted to get published with them. I also knew that I could not fail; I didn’t want to be rejected by them, so needed something different, maybe something risky, something that I had faith in. By now, sci-fi romance was starting to pick up, and more than anything, I wanted my sci-fi romance books out in the world.

Escape Velocity seemed to be the answer. Though I hadn’t looked at this book in around two years, I got it out, gave it a tidy-up read-through and sent it off within a couple of days — a definite snap decision! From there, Escape Velocity took on a life of its own.

The novella was accepted, though it needed to be a little longer, so I added some more scenes focusing on Kai’s PTSD (including many hours of research!), taking the word count to around 38,000. It was edited, but then the question was raised as to whether it would work better as a novel, so it was back to the drawing board again. I came up with an extra plot element and delved deeper into Sacha’s grief after losing her husband, adding yet another 25,000 words. By now, the story had taken on a whole different feel to the original novella — it felt fuller and definitely more satisfying.

The journey I took writing Escape Velocity was unlike any other book I’d ever written, but I couldn’t be happier with it. I never imagined that snatch of dream would turn into the book it is today. Kai and Sacha are two of the hardest characters I’ve ever worked with, but also two of the most rewarding.

Find out more about Escape Velocity
Only $1.99 for a limited time!

Behind the Book with Frances Fowlkes