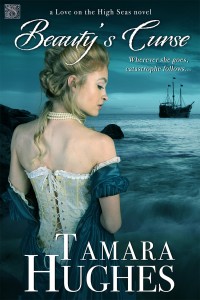 Beauty’s Curse is a story about a brooding pirate name David Lamont who finds a new purpose in life when he meets and chooses to protest Amelia Archer, a woman who is plagued by bad luck.

Now that I look back, it’s crazy, but initially I had planned to have James, the hero of Tempting the Pirate, the first book in the Love on the High Seas trilogy, discover that David, the brother he’d been searching for the entire book, had died. Poor David.

My critique partner, Barbara Longley was the one to suggest that David survive and have a book of his own. She’s such a wise woman. Then came the hard part… From the first book, we knew that he’d been kidnapped by pirates aboard the ship Neptune’s Mercy and later escaped in Madagascar. Hmm. What then?

I researched Madagascar in the 1700s and found very little, sad to say. But I did come across an interesting book, Robert Drury’s Journal. Over the years, there’s been some dispute over whether this story is true or not. Some say it was actually written by Daniel Defoe as a piece of fiction. Regardless, the book tells the story of how Robert Drury became a slave to a Madagascar prince and later escaped. Whether the tale is real or fictional, the descriptions of Madagascar are believed to be true. With that knowledge, I read the book to get a background of what David might have gone through as a slave in that region. Really interesting stuff.

From there, because Beauty’s Curse is the second book in a pirate trilogy, I needed a pirate, so I decided that David had joined up with a pirate ship after he escaped slavery. His internal demons were already well-established. His whole reason for sailing in the first place was because of his father’s scorn. His father wanted him to join the family shipping business, but all David wanted to do was play his violin, meet people, and travel.

OK then. I had my hero, a tortured soul, who sailed the seas to escape life, but I needed a heroine to wake him up and make him realize what he’s missing. I’ve always been fascinated by the concept of luck, and all the superstitions that surround it. And pirates were extremely superstitious people. Who could blame them? Their lives were always at risk because of the weather, the battles they fought, and the need to avoid those that would bring them to justice.

So why not place an unlucky heroine on a pirate ship and see what happens? Beauty’s Curse was a lot of fun to write. I always learn so much with each story, and this time I got to research pirate superstitions. First, women aboard ship were considered bad luck. Amelia had the odds stacked against her even before she stepped on deck. Then there were some really odd superstitions: whistling, sneezing to the left while boarding with your left foot first, and sailing on Thursdays or Fridays. All were no good. And forget about having bananas on board. Ha! Needless to say, it wasn’t all that difficult to establish the pirate crew’s growing wariness toward Amelia. And once that was present, the rest of the story just poured out.

Amelia and David were such a well-matched couple. Spending time with them was a pleasure. My next book in the series involves a female pirate. So cool! She must steal a priceless artifact from the hero. Hee hee. I love the whole conflict in this one. Stay tuned.

Find Out More About Beauty’s Curse

Behind the Book with Christina Phillips

Gemini May 21 to June 21 Accountability and commitment are at hand. This time in your life is shapin…