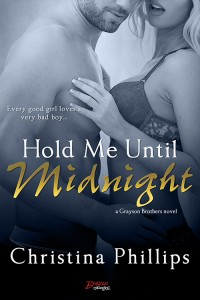 It’s funny how things turn out. When I first started writing, it was contemporary category romance and my long suffering heroes and heroines were lucky if I let them kiss more than once in the book J Weirdly, with each story my characters demanded a little bit more of the smexy, thank-you-very-much, until one day I entered the bedroom with them and then there was no stopping me *cough*.

None of those early books ever saw the light of day, and I eventually sold my hot historical romances where there was no shortage of naughtiness going on.

But in the back of my mind my love for contemporary romance stayed with me. I always wanted to write connected stories about three brothers, bad boys who didn’t believe in love or happily-ever-after. And although I’d wanted to be an Entangled author since they first opened their doors, it wasn’t until early in 2014 that the idea for the Grayson brothers suddenly hit me.

Alex, Jackson and Cooper set up home inside my mind and refused to budge until I listened to them. Not only that, but they lived in Los Angeles. Now, I’m an ex-pat Brit living in Australia and while I’ve set books in London, Sydney, Scotland and Wales, I’d never attempted to set a book in the US.

But hey, I’m always up for a challenge 🙂

HOLD ME UNTIL MIDNIGHT is the middle brother Jackson’s book. He’s an ex-street fighter who falls for a pampered princess, who despite the way things look turns out to be exactly what he needs.

And yes, I followed them into the bedroom 🙂

Find out more about Hold Me Until Midnight

Four Weddings and a Werewolf by Kristin Miller is now available! Follow Kristin on her blog tour for…

The Allure Blog tour by Lea Nolan kicks off next week hosted by Rockstar Book Tours! Lea will be vis…