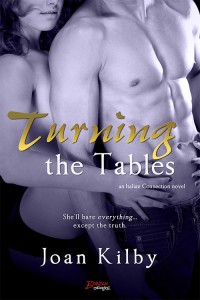 Turning The Tables was a book I had to write, if only to give my heroine, Tina Borlenghi, a happy ever after. Her love life sucked big time in Making Over The Billionaire, the first book of my Italian Connection series. Poor Tina, she didn’t deserve the crap her ex dished out. I had to fix that.

Jump back in time to June, two years ago, when my husband and I were on our way from Norway, where our daughter is at college, to our hometown in Vancouver, Canada. New York city was on the way so I figured I might as well cross it off the bucket list even though I’d never actually been interested in going there. Just another big city, right?

Was I ever wrong! I fell in love with New York and its bustling excitement. So much going on, everywhere, all the time. We walked all over the city, did all the touristy things–saw shows, ate in delis, went to the Met and Lincoln Center, rode the Staten Island ferry and saw the Statue of Liberty. One thing I particularly loved was the Reading Room in Bryant Park. You have to admire a city that sets aside space in a park for tables and chairs so people can simply sit and read. The few days I spent in New York have only wetted my appetite for another visit. As Arnie said in the Terminator said, “I’ll be back.”

I knew right away that Tina had to come to NYC. Not only is the city a major fashion center but also it was where she would a) prove to her brother Giorgio that she could handle running her fashion business by herself, and b) get over her asshat ex-fiancé, Fabio.  New York. New Start.

Making the hero, Luke Pederson, an ex-pro hockey player is a nod to my love of the game (except for the punch ups) and the fact that I grew up in Canada where it’s a huge sport. Those hockey players are as hot and badass as they come. Luke has a vulnerable side, too, though, as Tina discovers.

The role-playing angle evolved out of Tina’s need to keep her identity a secret. It gave her and Luke a secret of their own, something playful and special outside the responsibilities and stresses of their daily lives. I had a lot of fun with that. They did, too!

Find out more about Turning the Tables

Posted in: Authors Speak Out, Behind the Book, BrazenTagged: Brazen, Joan Kilby, Turning the Tables
Previous

Happy holidays! All month long meet some of our authors and their best selling books. Today Chris Ca…