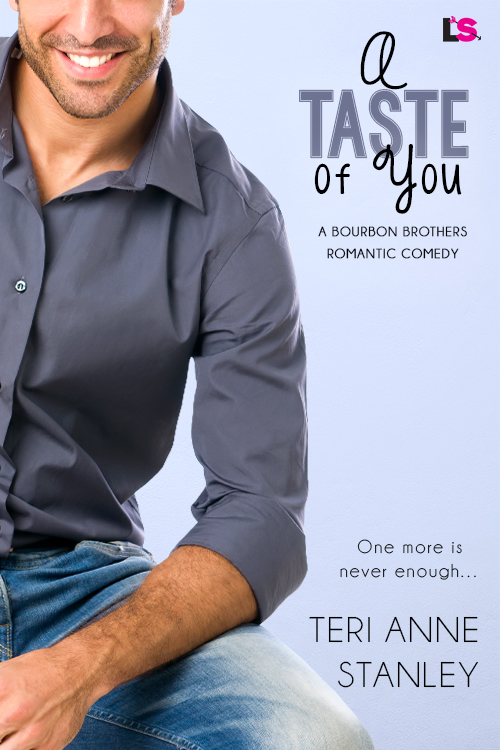 One more is never enough…

Take a peek inside A Taste of You by Teri Anne Stanley!

“I’m still not sure if Mason understands I’m technically your boss, not your, um, step up the social ladder,” Eve mused, after they’d said their good-byes to Nick’s friends and climbed into his truck. There was one Diet Mountain Dew left in the little cooler, and she unscrewed the top and chugged it, even though she’d definitely reached her caffeine quota for the day. Then added, “Oh God! You don’t need any steps anywhere. On any ladder. That was— I mean, that I’m not your girlfriend. He’s the one who said—” Nick was laughing at her. “You would definitely be a step up the ladder for me, darlin’. Did you not just meet my last girlfriend?”

“She was your last girlfriend?”

“And you moved away from here five years ago?”

“Seriously? What have you been doing for the past five years?”

“Abusing myself?” He shot her a crooked smile, and at her open-mouthed stare, said, “I’ve dated.”

“But have you, um…you know…since you moved away?” Stupid question. Of course he had.

“Yes. It also means I can’t believe I asked that. Of course you’ve hooked up. Just because you haven’t been seriously involved with someone since Misty doesn’t mean you haven’t…you know.”

“Okay.” A moment’s pause. Then, “Not that I’d say Misty and I were seriously involved. At least, I wasn’t.”

The late afternoon sun slid behind a hill and cast them into shade for a moment, then reappeared.

“Oh my God. You haven’t?” She swallowed the last of the soda and put the can in the cooler with the other—six—empties, next to Nick’s two water bottles. Way too much diet soda for one day.

He rubbed his neck, but even his golden tan couldn’t camouflage the red creeping up from under his collar and staining his cheeks.

“Oh my God,” she repeated, turning back toward the road, too, so she could think about the implications of this.

He was the hottest guy ever. And he was funny and smart and flirty and… “Oh my God. Are you gay?”

“What?” He jerked the wheel of the truck as though they’d been broadsided by a hurricane-force wind. “No! I mean… I’d tell you if I was, I guess. I’m just…not.”

“Well then, why haven’t you been involved with anyone?” And why was she being such a nosy Nelly? He’d kissed her just a couple of hours ago. And it had been brief, but it had been the best kiss she’d had in recent—or distant—memory.

“Wait. You’re a priest. You moved away from Napier County to join a monastery in Tennessee. Oh my God. I kissed a priest. I fondled a priest in a bar.” Her brain was spinning about a thousand miles an hour and her mouth wouldn’t stop sucking her foot in farther. “I’m going to hell. I’m so sorry. I’ve never corrupted—”

“Eve.” Nick had pulled the truck to a stop along the side of the road and put it into park. His eyes were soft and patient, but also laughing.

Her breath went out in a gust of relief. And then she sucked it back in again. “But—”

He shook his head. “I’m not a monk. But as for relationships…I’ve been…busy. Getting my life together. And I live with my mom.”

“Not like, in a Norman Bates psycho-killer kind of way, right?”

He laughed. “No. You can call her and ask her if she’s still alive or stuffed in the attic if you want.”

“But I wouldn’t be able to tell if it was really her. Maybe it would be—”

Her comment was cut off because Nick had unbuckled his seat belt and leaned across the center console of the truck and kissed her. With all the heat and tenderness of someone who really knew what he was doing.

About A Taste of You (Bourbon Brothers, #3):

Office supply addict Eve McGrath’s meticulously organized life is on the verge of crashing at her feet. Blue Mountain distillery’s new tasting and visitor center has to be finished pronto or her mother will lose her mind. Good thing Eve likes a challenge—which is exactly what she’ll face trying to convince the flaky contractor’s hot son to finish the job.

Nick Baker is back in Kentucky just long enough to get his wayward dad back on his feet. Then he’s gone. Unfortunately, he can’t resist helping Eve, the sexy distiller-in-distress, whose addictive, bourbon-flavored kisses threaten his carefully constructed boundaries. And if he can’t rein himself in, the uncomfortable secrets of past will nail him to the wall…

TERI ANNE STANLEY has been writing since she could hold a crayon–though learning to read was a huge turning point in her growth as a writer. Teri’s first stories involved her favorite Saturday morning cartoon characters, followed by her favorite teen idols.  She has also authored a recipe column (The Three Ingredient Gourmet), and scientific articles (Guess which was more interesting!).  Now she writes fun, sexy romance populated by strong, smart women and hunky heroes.

Teri currently supplements her writing income as a neuroscience research assistant.  In her nearly non-existent spare time, she is the human half of a therapy dog team, an amateur genealogist, and a compulsive crafter (if there are directions on the internet, she can probably make it). Along with a variety of offspring and dogs, she and Mr. Stanley enjoy boating and relaxing at their weekend estate, located in the thriving metropolis of Sugartit, between Beaverlick and Rabbit Hash, Kentucky.

My local chapter of RWA had  its first ever Afternoon Tea in August. It was a potluck so people bro…

Road trips are like the “thing” to do during summer, right? So we asked our authors what…