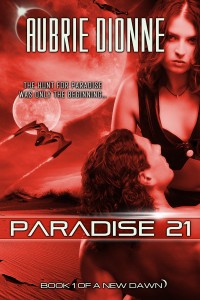 What Makes Space Opera So Awesome?

I’ve been a fan of space opera my whole life. I started watching Star Wars as a young kid on VHS tapes. (remember those?). I watched episodes IV, V and VI so many times, I memorized the dialog. I’d then go out into the backyard with my sister and act it out. Our swing set was our spaceship. And we’d always fight over who could be Princess Leia.
I guess you just couldn’t ever have two of them.

Then, in my teen years I moved on to Star Trek- The Next Generation. I watched every episode: weeknights at 7pm. My favorite character was Data, and I wanted him to learn how to be human so badly. My least favorite character was Lieutenant Worf, because he seemed so mean and grumbly, but he had a heart of gold underneath.

So I decided to come up with what makes space opera so awesome and write my own. Paradise 21 is the result, and here’s my list:
Awesomeness of Space Opera includes:

1. Space ships that can do really cool things.

Not only does Paradise 21 have a colony ship, and a pirate ship, it also has an alien ship…(can’t elaborate- it’s a plot spoiler!)

2. Adventure on other planets.

Paradise 21 isn’t all in space. Aries crash lands on a barren desert planet with all sorts of indigenous species. If you stick around for the trilogy, you’ll see an ice planet, and a jungle as well.

Aries must choose between her freedom and the man she loves. You’ll have to read to see which one she picks.

Again, I can’t spoil the plot here: but if you read enough of it, you’ll find this as well.

There’s one big laser fight at the end of Paradise 21, and someone gets shot! (Again- can’t tell you more than that!)

What do you think makes space opera so awesome? I’d love to hear your comments below.

It's a blog TAKE OVER with Aubrie Dionne!

What if the world was ending, and you didn’t make it onto a colony ship? by Aubrie Dionne

I’m not a fan of horror flicks, but I do love a good paranormal film, especially one where a relatio…

A lot of you have been ogling Lisa Kessler’s Night Demon cover (and rightly so).  It made the …