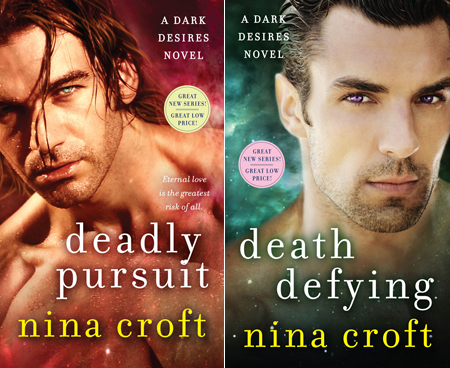 This fall, Entangled is partnering with St. Martin’s Press to release Nina Croft‘s Dark Desires trilogy in mass market paperback! These books will keep readers begging for more, so get ready to fulfill your dark desires.

The back-to-back publishing event of these three exciting novels (September, October, November releases!) will be at the special low price of $5.99 ($6.99 Can), and, big celebration, they’ll include never-before-published bonus scenes!

Earth is uninhabitable. People have discovered immortality. But there’s a price.  Intrigued?  Here’s more about Nina’s dynamic series, and the brand new covers: 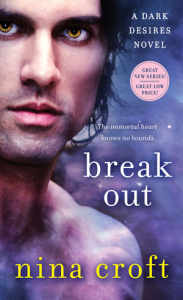 Two-thousand-year-old vampire Ricardo Sanchez won’t take no for an answer. Irreverent, insatiable, and utterly irresistible, Rico lives for no one but himself…until he meets his match in the form a gorgeous, mysterious woman. Now that he’s found the object of his passion, he is prepared to fight for her—at all costs…

Skylar Rossaria has to-die-for looks but there’s more to her than meets the eye. She has come to Rico to ask for help in breaking a dangerous criminal out of prison. What Skylar never expected was to be held captive to her greatest desires…But is falling into the arms of one of history’s darkest, most dangerous creatures worth the risk? Only time will tell in this game of immortal love and all-out war.

Breaking assassin Jonathon Decker out of a maximum-security prison on Trakis One seemed like a good idea at the time. Now, pursued across space by the two most powerful factions in the universe, the crew of El Cazador are having second thoughts. They’d like to give him back. Unfortunately, that is no longer an option.

Jon is used to working alone. Now, he’s stuck on the space cruiser El Cazador until he can work out just what he’s supposed to know that puts him on everybody’s most-wanted-dead list. He’s not happy that the crew includes a runaway priestess with designs on his virtue—such as it is. Jon likes women, but he gave up the role of protector a long time ago, and Alexia, High Priestess of the Church of Everlasting Life, is an accident waiting to happen.

After twenty-four excruciatingly boring years of doing her duty, Alex is finally having some fun. She

never meant to run away—it was a rash impulse—and she means to go back—eventually. But first, she’s

going to squeeze enough excitement out of the situation to last her a lifetime. And what could be more exciting than a stunningly gorgeous werewolf?

Meanwhile, the Church are chasing their missing priestess, and the Collective are pursuing their escaped assassin. Being hunted has never been more deadly…or more fun.

Captain Tannis of the starship El Cazador is part snake, part human, and—according to some—all bitch. She is one job away from her lifelong goal—to achieve the immortality she craves. The assignment: protecting the most powerful man in the Universe.

After five hundred years, Callum Meridian, founding member of the Collective, is bored out of his mind. Until he realizes he’s physically changing—into what, he isn’t sure. Callum is determined to discover the truth, but his own people will stop at nothing to prevent it from coming out.

With a coup brewing and the crew of El Cazador close to tossing him off the ship, Callum turns to Tannis. Sparks fly as they work together to make it out alive. But can Callum really trust the one woman hell bent on using him? Defying death has never been more dangerous, more sexy, or more fun.

March Madness Men of Bliss: Round Two (Day One)

Behind the Book with Stealing the Groom's Sonya Weiss

While there are plenty of adorable characters in Love Actually, I love Jamie and Aurelia. May…

#TGIF Readers! We hope everyone is finally back in the swing of things after a long 4th of July week…

Hello, everyone! I’m Diane Alberts, though I also write as Jen McLaughlin, and I thought it w…