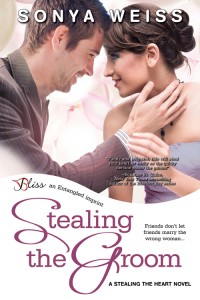 I’ve always had a thing for romantic relationships that grow out of friendships. I love books, movies and shows that have any element of this theme. I watched One Tree Hill with my then teenagers for the friends to more relationship between Nathan and Haley. I watched JAG in hopes that the friendship between Harm and Mac would become more-that one took forever! I think there’s a special kind of chemistry that can happen when friends step toward each other romantically.

Some of the sweetest and hottest (admits sheepishly) men in my life were my male friends. Though we never crossed the line from friendship to more and I did have the opportunity, I didn’t take it. And it’s always made me wonder about the road not taken.

My love of friendships-to-more and wondering about the road not taken is how “Stealing the Groom” first came into existence. All I knew about the story in the beginning was that the hero, Chad, and the heroine, Amelia had been friends since childhood. They’d developed a comfortable tell-each-other-everything kind of relationship.

I didn’t want to make it easy for the two of them to get together despite having an easy relationship as friends because there’s always that fear in real life that if the romantic relationship doesn’t work, the friendship will shrivel.

So I created the characters to be complete opposites, the kind of people that you would think could never make a relationship work.

I knew that as a man, the character of Chad would be less likely to be open to love after having seen the repeated damage that being in a bad relationship could do. So he closed himself off. However, I knew that he would have a carefully guarded place in his heart I labeled “The world can’t come in here, but you can” and that place had Amelia’s name on it. Because although she drove him crazy, he knew she had his best interests at heart.

At first, I had the heroine Amelia not be anti-love. But then I realized that I could make her anti-love but instead of having the kind of stiff upper lip Chad kept about love, she would deal with matters of the heart by using humor. Once I figured that out, it progressed to creating a heroine that was too impulsive for her own good.

Amelia’s parents died in a car accident when she was still a young child and deep within her heart was always that yearning to somehow turn back the clock and save them. Of course she couldn’t, but that longing made her someone who desperately (although unknowingly) wants to step in and save others.  That desire to intervene came from my own life when I desperately longed to save my mom and despite everything, she passed away.

So once I knew what both of the characters had faced in their lives, I wanted to create something that the heroine could do that would be so zany that it would be a different kind of premise. I figured that having her stop the wedding by groomnapping her best friend was a new twist. It’s how the story got its title. When I would describe it, I would say, “The heroine steals the groom”.

When I finished this story, I cried and that’s unusual for me. Then I put the story away. I thought that it was too zany and that no editor would want it. I saw a post for a contest on Marisa Cleveland’s blog about sending in the first page of a story. At first, I didn’t. But later, I changed my mind and sent it off. I didn’t think about it afterward because I didn’t think it would get picked.

But Marisa loved that one page and talked to her agent, Nicole Resciniti about it who signed me as a client and then sold the book.

Read an excerpt of Stealing the Groom!

“Funny, poignant, and laden with a surprising amount of emotion, Sonya Weiss will steal your heart as easily as the quirky heroine steals the groom!” —Roxanne St. Claire, New York Times Bestselling Author of the Barefoot Bay series

“Stealing the Groom is a fun sexy romp that proves opposites not only attract…they combust!”—Kylie Brant, bestselling author of Chasing Evil.

While there are plenty of adorable characters in Love Actually, I love Jamie and Aurelia. May…

Nothing says “family” to me like the smell of a turkey roasting in the oven, pumpkin pie…

There have been many things I’ve wanted to try over the years: parasailing, crocheting, belly…