First Meetings Are Everything

When it comes to books, television, movies, and real life—first meetings are everything. They always say, you only have one chance to make a first impression. We can tell a lot about how a story is going to go when we see a couple interact in that very first moment. What qualifies a first meeting as great in my opinion?

It should set the tone for the story! It should have that ephemeral spark that gives you an insight into each of the people involved. Finally, the first meeting should make you want to see what happens next. These are some of my favorites:

They both wish they were someone else and somewhere else when they meet for the first time. He swoops in to rescue her, but she was doing just fine. They are at the mercy of their families and duties, but there’s magic in that first interaction…just like their relationship.

Gamora and Starlord – Guardians of the Galaxy

He’s talking about integrity. She says he has the bearing of a man with honor, then she kicks him in the stomach, steals his treasure, and runs. He retaliates and an epic chase scene ensues. At first, they’re evenly matched.  Just when Gamora is about to deal an ending blow, she’s knocked aside by Rocket and Groot. Their chase is finally concluded by their capture. Enforced proximity seals the deal, but their initial meeting is one fraught with danger and excitement… just like their relationship.

Wade’s just finished a job and he’s buying drinks when Vanessa intercepts him. She makes her living “bumping uglies” and Wade’s intrigued. The verbal byplay gets heated as they try to one up each other on who had it worse. In the end, they hook up after some heated games of skeeball. They have an unconventional relationship, as evidenced by that first meet!

Enjoy a sneak peek at Cage and Bianca’s first “meeting.”

Fresh fear flooded her, but though the man carried a weapon and wore an open shirt in what the faint moonlight revealed to be a camouflage pattern, he didn’t lunge at them.

“My name is Sergeant Carlos Castillo—we’re here to take you home.”

Suddenly, Collin weighed too much, and Bianca collapsed onto her knees.

She could pass out now.

Pick up Bitten Under Fire by Heather Long, out now! 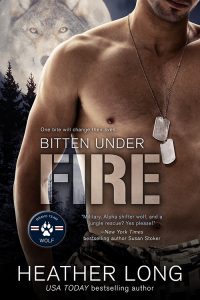 Bianca Devlin’s work is her life. Now, she’s finally taking a vacation…and guerillas hit her resort to kidnap a diplomat’s son. She does the only thing that makes sense—intervene to save the child’s life. Being dragged into the jungle with a scared kid she’s determined to protect was definitely not how she saw this trip ending.

After she returns to Texas, the last person Bianca expected to see was Sergeant Carlos “Cage” Castillo, the member of Bravo Team WOLF that helped rescue her. Nevertheless, there he is, living across the street from the house she just bought. The coincidence is alarming, but she has to admit, his presence isn’t entirely unwanted.

But there’s something off about Cage—the way he can move without a sound or the weird way his eyes seem to almost glow at times. And how can Bianca manage her growing attraction, when everything she knows about him and his reason for being there, turns out to be a lie? 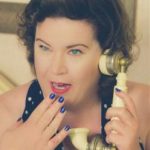 USA Today bestselling author Heather Long likes long walks in the park, science fiction, superheroes, Marines, and men who aren’t douche bags. Her books are filled with heroes and heroines tangled in romance as hot as Texas summertime. From paranormal historical westerns to contemporary military romance, Heather might switch genres, but one thing is true in all of her stories—her characters drive the books. When she’s not wrangling her menagerie of animals, she devotes her time to family and friends she considers family. She believes if you like your heroes so real you could lick the grit off their chest, and your heroines so likable, you’re sure you’ve been friends with women just like them, you’ll enjoy her worlds as much as she does.

Posted in: Author Interview, Authors Speak Out, Behind the BookTagged: Bitten Under Fire, Heather Long
Previous

Today marks the very first releases under two of our new imprints, Flirts and Ever Afters.  All I Wa…

Go behind the book with Promise Me co-authors Robin Bielman and Samanthe Beck. Watch t…