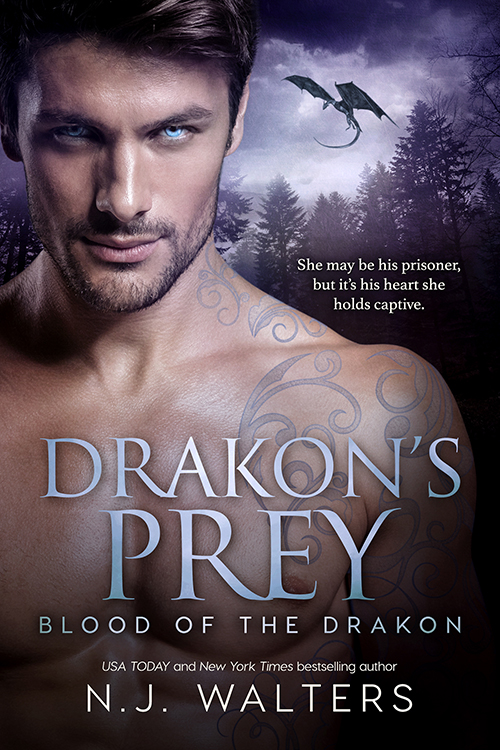 She may be his prisoner, but it’s his heart she holds captive.

Take a peek inside Drakon’s Prey by N.J. Walters!

“You had men watching you.”

Of course, he’d known. She hadn’t been acquainted with him long, but Tarrant seemed to be the kind of man who was thorough when it came to such things. He appeared both competent and confident.

He canted his head to one side. “Just how did you know? Because I was watching both you and them, and you knew they were there before you saw them.”

Crap, what did she do now?

He reached across the counter and cupped her face in his hands. “Tell me the truth.”

“Why? You haven’t told me the truth about why you took me.” It was stupid to bargain, but she didn’t care. She needed some answers.

“I know those men were sent by someone in the Knights of the Dragon. If you’re not with them, as you’ve claimed you’re not, then you were in danger.”

“But you didn’t know I wasn’t with them,” she countered. “Not then.” Tarrant released her and took a sip of coffee. She missed his touch.

“You hid from them. That was a good indication.”

“You really were watching me all along.” It gave her the shivers. It was so easy for someone with skills to spy on someone else. She wondered if her sister had been doing the same thing for years without her knowledge.

“Yes.” He set his mug down and came around the counter to stand beside her. “How did you know they were there?”

She opened her mouth to lie but found she couldn’t do it. “You won’t believe me,” she said instead.

He was standing too close. She could feel the heat from his body, smell his masculine scent. She fortified herself with a mouthful of tea.

“A gift.” His tone was neutral, with no way for her to gauge what he was feeling.

“Yes, a gift. My grandmother had it, too. I can sense danger.” Best to keep the explanation simple. “It’s instinct.”

He turned her stool until she was facing him. “It’s more than instinct. You knew those men were outside the cabin.”

She shrugged, unwilling to elaborate further. “All I know is that I can tell when someone means to harm me. I always know when there is danger around.” She braced for his questions about her talent, not quite sure how she’d respond. She’d already told him more than she’d ever shared with anyone outside of her grandparents.

“And what do your instincts say about me?”

Not what she’d been expecting him to ask. “Umm, I’m not sure what you mean.” She didn’t want to talk about her feelings for him.

“Yes, you do.” He sat on the stool next to hers and cupped her chin in his hand. “Tell me.”

She licked her lips and swallowed. This wasn’t smart, but she was no longer sure she had any other choice. “You’re a dangerous man,” she began.

There was no point in denying what they both knew was true. She was about to push her luck. It was time to find out exactly where she stood with him. “You’re no stranger to violence.”

He tightened his hand fractionally before relaxing it.

This was it. “But for some reason, I don’t think you’ll hurt me. I shouldn’t believe it, since you kidnapped me.”

“Rescued you from danger,” he countered.

She almost smiled. “Guess it depends on your perspective.”

He released her chin and stood. “I am deadly to my enemies.” He pinned her with a glare. “Don’t become an enemy, and you’ll have nothing to fear.”

“See.” She pointed her finger at him. “I should be scared to death of you, running for my room or trying to knock you out or something so I can escape.”

“So you are.” He ran his hand over her hair and down the side of her neck. Heat blossomed in her chest and radiated outward. “What else does your gift tell you?” His low murmur was sexy and made her toes curl.

“You want me.” She really didn’t need anything extra to tell her that.

“Hmm,” he whispered as he leaned down and kissed just behind her ear. “I do.”

“I shouldn’t want you,” she reminded him.

“Why not?” He left a string of kisses down the curve of her neck.

Why not? She couldn’t come up with one single reason.

Valeriya Azarov turned her back on the family business to write and illustrate children’s books. But with a sister who leads the Knights of the Dragon, it’s impossible to get away from the secret society whose mission is to destroy and enslave dragons. When information falls into her hands along with the opportunity to save at least one of the ancient creatures, she can’t turn away any longer.

When a woman moves into the cabin above Tarrant Cooper’s secret underground lair, he’s both suspicious and intrigued. He hasn’t lasted four thousand years being careless, so when he suspects her of being a part of the Knights, the plan is to kidnap her and find out how much the organization knows about him and his brothers.

He’s drawn to Valeriya, but trusting her could get him killed. Even if she’s a pawn in the war between drakons and Knights, giving her his heart would mean forever.

N.J. Walters is a New York Times and USA Today bestselling author who has always been a voracious reader, and now she spends her days writing novels of her own. Vampires, werewolves, dragons, time-travelers, seductive handymen, and next-door neighbors with smoldering good looks—all vie for her attention. It’s a tough life, but someone’s got to live it.

The Bliss Anniversary celebration continues.  We hope you had fun at the Twitter party, have entered…