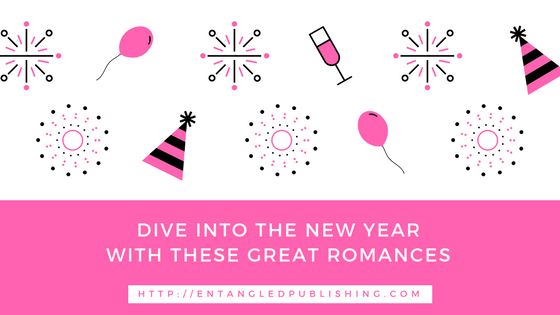 Happy New Year’s to everyone! Why not kick off the new year with a New Year’s romance?

Kiss Me at Midnight by Jen McLaughlin

Her New Year’s resolution was seduction…

Doctor Ashley Hanes has one mission and one mission only—end her annoyingly long dry streak and ring in the New Year with a bang. Literally. When her long lost and oh-so-sexy ex-best friend Ethan Pierce shows up as if he hadn’t broken her heart all those years ago, suddenly she doesn’t want to bring home just any man. She wants Ethan.

What should have been one night of blow-your-mind make-up sex quickly turns into another. And another. Before long, Ashley thinks maybe she and Ethan should reunite for good. If only the elusive bachelor would stop running from his tortured past and trust a future in Ashley’s arms…

Previously released in December 2013 under the Entangled Flaunt imprint

Yours at Midnight by Robin Bielman

One night. One love. One secret that could rip them apart…

Lyric Whetsone only had eyes for Quinn Sobel’s brother Oliver, until a car crash took Oliver’s life on New Year’s Eve. Then, a moment of shared grief between Quinn and Lyric became something more impassioned, something that frightened Quinn so much he ran from Lyric’s bed and her life, disappearing for four long years.

Now Quinn’s back for another New Year’s Eve, struggling for closure, desperate to leave his grief in the past and make amends with the girl of his dreams.

But Lyric has a secret–one that could drive Quinn from her life forever. Will Quinn run away from the love and acceptance he’s always wanted…or will he claim his New Year’s kiss and make her his at midnight?

One night, two strangers, and enough heat to melt the secret coming between them…

Special-needs teacher Kayla Johnston kisses her New Year’s Eve plans goodbye when she’s cajoled into attending a swanky fundraiser for her school at a remote estate. But instead of schmoozing with the would-be donor, a massive snowstorm sends Kayla careening off the road, straight into the path of a wickedly handsome stranger. When their chemistry ignites, Kayla’s New Year’s Eve begins to show some seriously sexy promise…

After hearing about the selfish “gazillionaire” who ruined her New Year’s Eve, reclusive entrepreneur Ryan Langford can’t bring himself to admit that he’s the millionaire responsible for the fundraiser. Besides, he’d much rather be marooned in a cabin with the enticing teacher he can’t resist. But if he wants a chance with Kayla, he’ll have to find a way to reveal his real identity before the snow melts and she disappears from his life.

Previously released on Entangled’s Ever After imprint – December 2012

A Husband by New Year’s by Sean D. Young

When Renee McClendon was a teenager, she made a list of all the qualities her perfect man would have, but no matter how many handsome guys have ticked the boxes, she has yet to find the man for her. She wants a regular guy who’s not afraid to get his hands dirty, and she’s given herself a deadline. If she doesn’t find Mr. Right by New Year’s, she’s done searching.

Patrick Dunlap is used to woman looking at him as a lowly chauffeur…until they realize he owns the whole company. All he wants is a woman who’ll want him for who is, and not only see dollar signs. He hits it off with Renee right away, so while they get to know each other, he withholds some small details instead of risking what they’re starting to build.

But when the truth comes out, how forgiving will Renee be?

Entangled Under the Mistletoe with Patricia A. Wolf

We asked our authors, if you could be any Hollywood mom, you would be…finish this sentence. Ch…