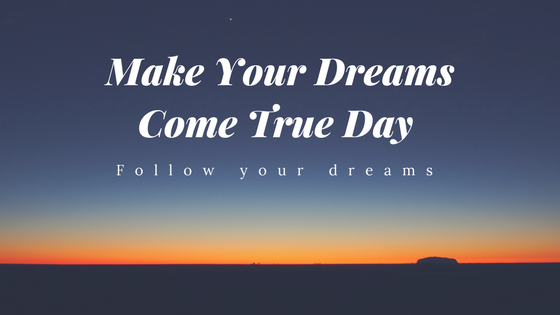 Today is National Make Your Dreams Come True Day. Have you made a list of dreams that you would like to fulfill one day? We would love to hear what’s on your list. We also have a few books to inspire you that sometimes your dream fulfillments may come in unexpected packages.

Love in the Morning by Meg Benjamin

The reality show, Lovely Ladies of L.A., should have launched Lizzy Apodaca’s catering company into solvency. Instead, when her carefully prepared appetizers mysteriously gave the cast on-camera food poisoning, she lost everything.

To make matters worse, her car breaks down in Salt Box, Colorado, a town not much bigger than a salt shaker. But maybe her luck is changing—the handsome owner of Praeger House, the town’s premier hotel, needs a kitchen assistant.

Clark Denham realizes his diamond in the rough is a polished gem when Lizzy steps up to save the hotel’s breakfast buffet after his temperamental head chef quits. It isn’t long before she’s winning his heart as smoothly and efficiently as she runs his kitchen.

Even the Score by Kate Meader

He’ll make her an offer she can’t refuse…

Actress Tess McKenzie is performing in the Tenth Circle of Showbiz Hell—dinner theater. All she really wants is to start a theater of her own. Then Tess receives an offer she can’t refuse. She’ll get her funding…if she pretends to be the fiancée to her nemesis, Texan property tycoon Hunter Dade. If she’s going to pull this off, she’ll need all the luck she can get. Break a leg, indeed.

On the verge of a big business deal, Hunter needs to hire a fiancée. He hasn’t quite forgiven Tess for ruining his wedding, but when their chemistry goes from combative to straight-up lust, the “no sex” clause in their mutually beneficial arrangement is tested. Which is a serious problem, because if Tess isn’t careful, she’ll go from breaking a leg to breaking her heart…

The Likelihood of Lucy by Jenny Holiday

She would never bow to any man…

Trevor Bailey is on the cusp of opening the greatest hotel in London. His days as a gutter snipe are behind him, as he enjoys a life of wealth, society, and clandestine assignments as a spy in the service of the Crown. Until one tumultuous night churns up the past he’d long left behind…

Turned out by her employer for her radical beliefs, Lucy Greenleaf reaches out to the man who was once her most beloved friend. She never expected that the once-mischievous Trevor would be so handsome and gentleman-like and neither can deny the instant attraction.

But Lucy’s reformer ways pose a threat to the hotel’s future and his duties as a spy. Now Trevor must choose between his new life and the woman he’s always loved…

In Bloom by Katie Delahanty

My name is Olivia Bloom and I. Am. Free.

I left for LA with everything I owned piled into my old Volkswagen and dreams of becoming a costume designer. Little did I know I’d wind up designing for a lingerie company—yeah, not sure how I landed this gig—and taken under the wing of two young Hollywood insiders. The fashion shows and parties were great, but life really got exciting when the seriously hottest lead singer of my favorite band started to fall for me.

How does someone like me, an ordinary girl from Pittsburgh, wind up in the arms of the world’s sexiest rock star—surrounded by celebrities, fashion, and music—and not be eaten alive? Berkeley is everything I’ve ever dreamed of in a boyfriend, but the paparazzi, the tabloids, the rumors, it’s all getting a bit too crazy. My life has become every girl’s dream come true, if only I don’t blink and lose it all…

A Change of Plans by Robyn Thomas

She planned for everything…except him.

Sara Greaves has been planning her perfect wedding since she was five. Twenty years. Wasted. When she’s dumped by her fiancé, she heads to Vegas to forget and ends up at a hotel hosting a Romance Readers conference. Cuz she’s lucky like that. Mr. Tall, Dark, And Anti-Marriage buys Sara a drink, and makes her a bet…she could marry any guy in Vegas tonight and make it work.

She wasn’t supposed to choose him.

Ethan Munroe is a ruthless divorce lawyer who would have been voted “Least Likely To Marry (Ever)” in school. And yet, here he is with a hangover, a wedding band, and a sexy, gorgeous bride for the next month. A bride who doesn’t want to stay married to him. He never planned this, but he can’t bring himself to go for the speedy divorce.

Hi, I’m Alexia the Flight Risk Mom. I was once a grand adventurer, collecting exotic stamps i…

#IShipIt With Avery Flynn: Luke and Claire   Have y’all watched the hotness that …

Here at Entangled, we like to read. (Bet you would never have guessed that.)     So…