I value experiences. Things, like a purse, get old and forgotten (or ruined when your cat vomits into your leather satchel). So, it is not unexpected that I’ve created some meaningful memories like hiking to the summit of a 14,000-ft mountain, dancing with Zulu women in South Africa, or putting my hand inside of a lion’s mouth.

The boyfriend and I recently visited the Pacific Northwest. We stayed in a lovely cabin that sits near a chicken coop. Upon our return to the cabin one evening, we noticed a rogue chicken outside of the coop, pecking around, trying to find its way back inside. We couldn’t let the chicken remain outside and vulnerable to predators being the animal lovers that we are. We worked as stealthy team as we attempted to coerce the chicken back into its pen. About 10 minutes into our teamwork, we corned it. I was tasked with catching it. (I find it amusing that I was volunteered for this task and not the boyfriend.) After several attempts to hold onto the bird, I was beginning to feel the pangs of defeat.

Imagine it—two grown adults almost bested by a chicken. Well, almost. We got it back into the coop after a little more teamwork and bickering (“Help me!” “I’m here for moral support” “Just grab it” “I am—you try it!”).

When we hopped in the car to leave the cabin for good a few days later, the boyfriend looked over at the chicken coop.

“Huh. That chicken—the one that nearly bested us—is outside of its coop again,” he said with a chuckle.

So, yeah, we got bested by chicken, who, evidently, always escapes its coop.

Get The Reaper’s Kiss by Abigail Baker for FREE! 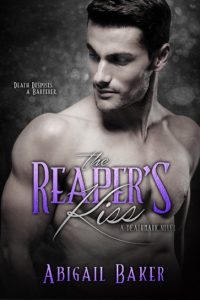 Ollie Dormier’s tattoos are deadly. She is a Scrivener—an employee for Death—and her skull tattoos mark her clients for their demise. She does her job, and she stays out of trouble. But when her hands start to burn hot and fierce, and her control goes leaping out the window, all hell breaks loose. Ollie is showing the early signs of being a Master…demonstrating power that is forbidden.

That power is exactly what Reaper Brent Hume is counting on. A hot, scruffy rebel, who does marvelous and terrifying things to Ollie’s insides. Now he needs Ollie’s help—and her skills—to overthrow the evil and corrupt Head Reaper. That is, if he can figure out a way to keep this hot-handed girl cool…and keep his hands off. 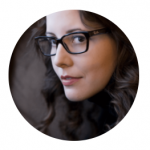 Abigail Baker shares her home with a Siamese cat endearingly named “The Other Cat” and two rescued mutts with mundane human names that people think are cute. In addition to writing about rebellious heroines, she enjoys hiking, discovering craft beers, baking the perfect vanilla bean cupcake, and rock climbing (going as far as scaling 800 vertical feet to the summit of Devil’s Tower National Monument in 2013.).

While You Were Sleeping—But Not With Each Other!

To Be, or Not To Be…An Idiot There are few things that get an author’s attention like a litera…

The Speculative Salon has named Touch, by Jus Accardo, and Under the Moon, by Natalie J. Damschroder…