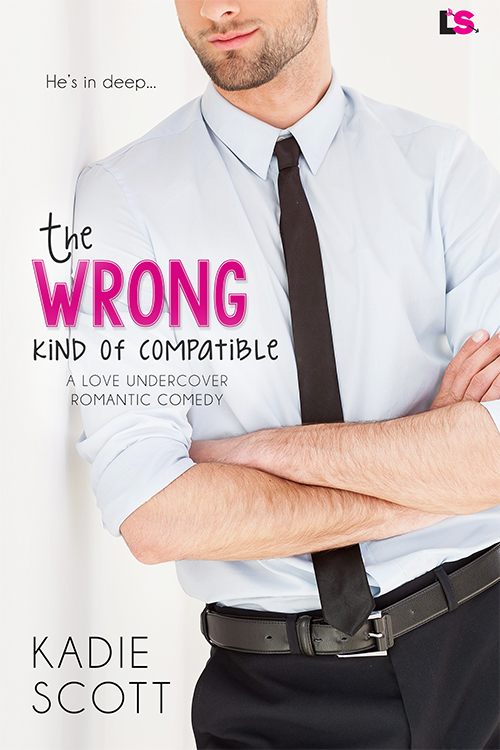 Take a peek inside The Wrong Kind of Compatible by Kadie Scott!

Cassie stared up at him with wide, desire-laden eyes—somehow bigger and bluer without her glasses—and opened her mouth. But only a choked squeak emerged. And a weird satisfaction that he’d been able to make her speechless thrummed through him.

Drew had not meant to come on to her the second she showed up in the office, or share the part about the flowers in his mother’s yard. He was trying to be romantic with the plant. He’d even called his mom last night for advice on what to get.

But after a long, sleepless night with thoughts of her bombarding him, the second Cassie walked into the office in that dress…

Every ounce of blood in his body rushed south, and he couldn’t seem to stop touching her. She quivered beneath his fingertips, her breath coming out in short pants, and watched him. What he wanted to do was bend her over her desk, lift up her skirt, and…

Fuck. He was not going to get through this day if she kept looking at him like she wanted to taste every inch of him.

He lifted his hand away, intending to retreat to a safe distance—which might mean moving clear across the country. He’d heard Idaho was pretty.

Then a regret-filled sigh escaped her lips.

“Fuck it,” he muttered. He cupped the back of her head, brought her flush up again his body, and slanted his lips across hers in a kiss that declared, in no uncertain terms, that she was his.

Cassie melted into him, whimpering as he nipped her lower lip. The sound both drove him higher and dropped him back to reality with a painful thud. They were in the office, where coworkers were likely to start arriving any second. And he was losing his ever-loving mind.

Drew reluctantly pulled back and smiled as she stood for a moment, eyes closed, face tipped up to him like a flower to the sun. It struck him that he’d like to be her sun—the guy that drew her closer with the force of gravity, who lit her up, who heated her to the core.

Slowly Cassie’s eyes fluttered open, the turquoise color dark with her need. She licked her lips, eliciting a groan from him. At the low rumble of sound, her eyes widened, and then she smiled. “Maybe we shouldn’t work together today,” she murmured.

He forced himself to take a step back, a step away from her warmth and her sweet scent. Steering clear of each other was probably a good idea, given that all he could picture now was sitting in Cassie’s cube with her on his lap, everyone around them unaware as he touched her. Everywhere.

Damn. When did he become the rule breaker? Maybe he always had been, and she brought it out in him? “Given that you just made my floppy a hard drive, I think you might be right.”

Cassie choked on a surprised laugh as Drew scrubbed a hand over his face. Why had that even come out of his mouth? “Sorry. I have no idea why I said that.”

She shook her head. “If you start in on the innuendo, I might have to leave the office early.”

Drew blinked as the implications struck. “Wait. That really does it for you? Nerdy sex jokes?”

A pink flush crept into her cheeks. “Maybe.”

“I figured you thought they were funny, but not…”

Her lush lips tipped in a smile that inspired more X-rated thoughts. “Hot?” She ran her hand down his chest in a way that had every muscle underneath tensing. “I guess I find the combination of funny and nerdy kinda hot. Especially when you say it. It gives me ideas.”

Drew wanted to punch a fist in the air. He didn’t have to be Max, or some super-suave special agent. He didn’t need a book to tell him what to say next. She was turned on by his stupid one-liners of all things.

“If that’s the case, I’d be happy to talk to you in binary all day long.”

Her eyes went a darker shade of blue-green. “Oh my,” she murmured in a sultry voice that went straight to his dick.

Oh my was right.

About The Wrong Kind of Compatible:

Award-winning contemporary romance author, Kadie Scott, grew up consuming books and exploring the world through her writing. She attempted to find a practical career related to her favorite pastime by earning a degree in English Rhetoric (Technical Writing). However, she swiftly discovered that writing without imagination is not nearly as fun as writing with it.

No matter the genre, she loves to write witty, feisty heroines, sexy heroes who deserve them, and a cast of lovable characters to surround them (and maybe get their own stories). She currently resides in Austin, Texas, with her own personal hero, her husband, and their two children, who are growing up way too fast.

Who is this dark mysterious man?  Find out on Virginia Kelly’s blog tour–where he’…

Hey everyone! We are super excited to announce the hosts and schedule for the SPRING MOON Blog Tour …