My five plus one Best Movie Couples of ALL TIME.

My five plus one Greatest Romantic Movie Moments of ALL TIME. 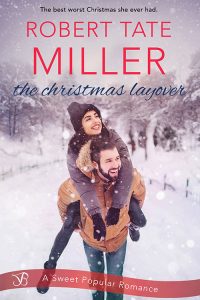 The weather forecasters said the snowstorm would miss the eastern seaboard. They were wrong. When Ally Henderson’s flight from Southern California to get married in New York City for Christmas gets diverted to the tiny Midwestern town of Bethlehem, she’s desperate to get back in the air and back to the Big Apple. But with all the airports closed, she’s forced to rely on Midwestern hospitality to wait out the storm. And she soon learns that she has a storm of her own to weather. One that could shatter her life.

Living with a kind stranger is one way to spend a snowed-in Christmas, but when she meets the local diner owner, Jake, sparks fly. Only, Ally’s a big-city girl with big-city dreams, and Jake will always be a Bethlehem boy.

Born in Atlanta, Georgia, Robert Tate Miller was raised in Hendersonville, North Carolina where he started writing at a young age. Rob has written many screenplays and has had six movies produced for the small screen. His TV movie credits include Three Days, Secret Santa, Hidden Places, Farewell Mr. Kringle, Christmas Cookies and Love Struck Café. Rob wrote the novels Secret Santa (Atria), Forever Christmas(Thomas Nelson), and The Christmas Star (Waterfall Press). Rob graduated from the University of Georgia with a BA in Journalism/Mass Communications. He lives in Los Angeles, California.

How to Be Your Own Guru by Amanda Ashby

Imagine the scenario.  One night of passion in an exotic locale, a quick read with a lasting romance…