Anyone who knows me is well aware that I’m basically an oversized kid. If offered the chance to go on a high end, luxury vacation or race around a theme park, I will pretty much always choose the latter. So, it’s no wonder my characters also tend to hit the Ferris Wheel or roller coasters. Specifically, in Blackmailed by the Hero, Vicky and Dante visit the Santa Monica Pier to confront one of his fears while doing one of her favorite things.

Considering I’m from Michigan, Cedar Point in Ohio tends to be our most common theme park adventure, but last year I took my favorite minions (the ones who call me “Mom”) to DisneyWorld. We’ve been before, but last year we decided to do things a little differently.

I introduced my son to the Free Hugs project in the spring. He looked me dead in the eye and said “We need to do this at Disney.” I had some minor worries, but considering the minute we walked into the Magic Kingdom, a gorgeous twenty-something stopped him for the first hug of the day, I knew it was a great idea. The cast members loved us, even if some of the other park guests thought we were a little…odd. 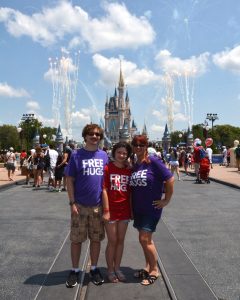 I can’t pretend any of us are stunning vocalists, but we all like to sing. More than that, we like to break into random songs that have to do with whatever conversation we happen to be having. So, we brought that with us to Disney. The best part was when we’d start singing in line (Disney songs or not) and other people would join in. 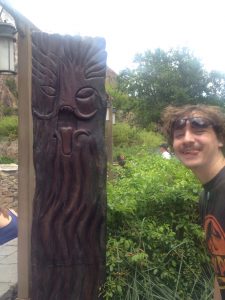 We also love to quote movies. Like LOVE to quote movies. So, whenever we’d encounter someone or something in the park that set off our inner movie junkies, we’d yell quotes. Probably the favorite memory of this was with regard to the cast member stationed outside Cosmic Ray’s Café. She stood there all day, waving at people with a giant Stitch glove on her hand (I’m sure her actual job was to answer questions.) By the end of the day, she would start laughing before we ever got to her because every time we passed, all three of us would put on our best Stitch voices and holler, “Also…cute and FLUFFY!” 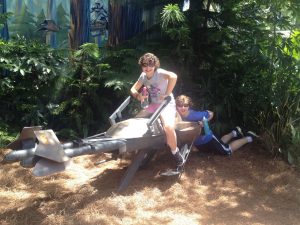 Honestly, DisneyWorld is one of our favorite places to go. And this time, we vowed to leave all our worries at home. There would be no panic to hit every ride or see every show. Nor were we taking along any concern over what we ate or the money we spent on souvenirs. (We had a budget…we all stayed under it, if you can believe that.) We wanted to embrace the magic and the happiness, and because I live with two of the world’s most awesome nerds—that’s exactly what we did. I’m pretty sure Vicky and Dante would have approved. 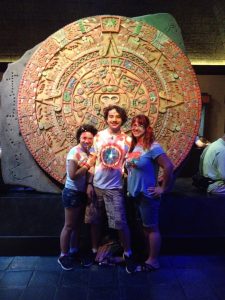 Check out Blackmailed by the Hero by Julie Particka, on sale for only 99¢ for a limited time! 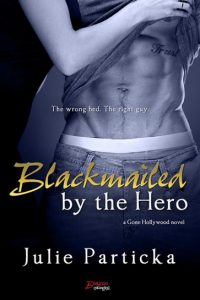 The wrong bed. The wrong guy.

Party planner Vicky Stone is on a post-divorce mission. Not only does she intend to land her dream promotion, she’s going to indulge in a night of hot hook-up sex. Preferably with the hunky actor she just met at a work function, no-fraternization rules be damned. Fortunately, his drunken directions included a right that should have been a left, landing her in bed with her brother’s extra-hot, extra-off-limits best friend instead of the unemployment line.

Bad boy Dante Palladino’s forbidden fantasies are about to come true…until Vicky realizes who she’s feeling up. And to find out she risked her job for sex with some loser? Not on his watch. Dante throws down the ultimate, albeit self-serving, blackmail. Vicky will date him—and only him—and her secret will be safe. But Vicky swore never to fall for another guy who could break her heart…and Dante’s on course to do just that. 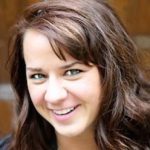 When Romance Turns to Edible Bliss

I’ll never forget the first time I heard the term, “shipping.” My teen daughter was talking a…

It’s not often that I watch a show from its inception or manage to keep up with it. I’m late …