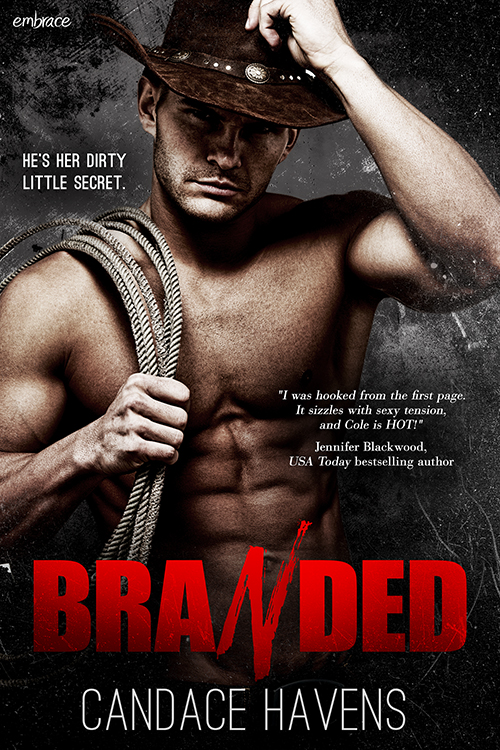 Damn. She was fucking beautiful. I hadn’t expected that. When she’d fallen against me, her body had been soft in all the right places. And that strawberry smell from her hair was fucking sweet, and those tits…they were real. A lot of the women around town had fake ones. But I’d always been fond of the natural kind, no matter the size.

She sat there next to me on the golf cart as we made the long drive back to the house, and all I could think about was what it would be like to be skin to skin with her.

My uncle had told me two things when I took over as temporary ranch foreman for him. The first was not to fuck around with the boss’s granddaughter. The second was if I even looked at Callie Llewellyn cross-eyed, I’d get my ass kicked. That was a joke, since he’d been in the hospital at the time and was still in recovery from his leg being crushed by a tractor. Now, if that had been my dad, the joke would have been a threat, one he would follow up on. I had the fucking scars to prove it.

I was here to do a job, to help my uncle, and take care of my sister. That meant leaving the princess alone. And that was okay, since I wasn’t much for relationships or anything much more than one-night stands. I had a list of women in Amarillo I’d never call back on my phone. Someday, I’d get around to deleting them. Anything more than once and they tended to get clingy.

She might think I’m an asshole, but I answered to her grandfather, not her. Best to keep my distance. Her grandparents had been talking about her arrival for weeks, like it was the second coming of Christ.

“I can’t wait for you to meet her,” Mrs. Llewellyn had said. “She’s a sweetheart and absolutely brilliant. Someday, she’ll take over the empire. We’ve been grooming her since she was a babe.”

I couldn’t imagine being groomed for anything. My sister and I grew up hard. We lived day to day. Things were good right now, but one wrong move, and we’d be out on the streets.

No way would I jeopardize my family’s future for a piece of ass, didn’t matter how fucking hot it was.

See how long Cole can resist the temptation of Callie on September 19th!

Be sure to add it to your Goodreads shelf or follow Candace Havens so you don’t miss release day!

I have my hands full taking care of my little sister and covering for my uncle as ranch foreman. The last thing I need is a Texas princess like Callie Llewellyn getting up in my business and messing with my head.

All I can think of is getting up close and personal with those curves of hers. And being on the edge of discovery makes our quick-and-dirty encounters twice as hot. And that’s all they are—quick and dirty—there’s nothing deeper going on here.

5 Reads to Cure Your End-of-Summer Blues

Meet the Authors: Which two books would you save from a burning library?

The blog tour for UNDYING DESTINY by Jessica Lee is starting on Monday! Stop by these sites for auth…

Cowboy romances have become increasingly popular over the years. Once you read one, you will want to…