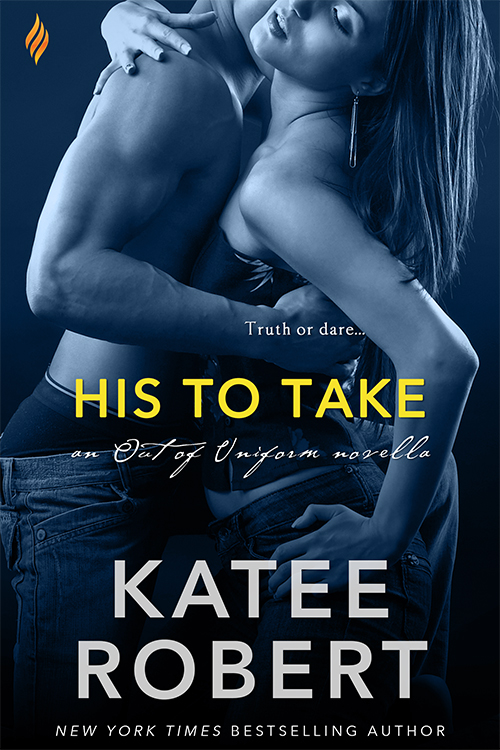 Drum roll please! We have the hot hot hot cover for Katee’s next novella in the Out of Uniform series to share today.

About His to Take:

Erin Robinson is having an epically bad year. Her blossoming career on Broadway tanked, forcing her to crawl back to home to Wellington. The icing on her failure cake? Her former on-again, off-again fling is in town, and the sexy Marine is taking up way too much space.

Warren Davis always knew Erin was special, which is exactly why he can’t have her. A girl like her deserves something permanent—something neither of them wants. But now that they’re both back in town and she’s right there in front of him, a challenge in her eyes he’s never been able to resist, he’s questioning everything.

That challenge quickly escalates into an epic game of Truth or Dare. Erin’s sure she’s got him on lock, but as the night progresses, Warren’s dares intensify, drowning her in lust. But with the past still breathing down their necks, there’s no way either of them can win…

Find it on Goodreads

Avast, me hearties! It's National Talk Like a Pirate Day

Tuesday January 15th is #NationalHatDay. To celebrate, we asked our authors to …

Because of him, she’s dying.  Will she choose to love at the price she never wanted to pay? Jo…