From Russia, with Love

Last year my editor asked me to write another book in the Guide to Love series. However, I’d already matched up the characters who appeared in the earlier novels, so this gave me an opportunity to bring two entirely new people into my merry band of geeks—excuse me, cyber security experts.

Going on the premise, “write what you know,” a British hero was the easiest decision (my husband is British and as he will tell you ad nauseam, he’s the inspiration for all my heroes). That left a choice for an appropriate love interest and for a long-time I’ve wanted to write a Russian heroine. This seemed like the perfect opportunity.

From a young age I’ve had a weird fascination with Russia. Maybe it was being born during the Cold War, when Russia was a big, forbidden and often feared entity geographically connected (via the Arctic ocean) to Canada, my homeland. Or maybe it stems from a family history project I did where I discovered that my great-great grandparents emigrated from Russia to the USA and then to Canada in the late-1800s.

Then when I went to University, the plan was to major in French and minor in Linguistics. But I needed a class at 11am to round out my schedule. Russian language fit neatly into that timetable. Within the first month I discovered I loved Russian, despite it being the hardest language I’d ever attempted to learn.

Unfortunately, due to circumstances, my university life was cut short after one year so I never completed my degree. However, I did continue to study Russian at night school while I lived in London. The fall of communism finally opened the way for me to visit the country I’d only previously read about. Through my night-school, I arranged to spend a summer in St. Petersburg studying at the university there. Rather than stay on campus, I opted to board with a Russian woman and her son who rented out the only bedroom in their apartment to make a little extra money. They both slept in the sitting room while I was there. I can only imagine my children’s reactions if I told them they had to sleep on the floor as I was renting out their bedrooms.

All this brings me to why I wanted to write a Russian heroine – the everyday Russian people are incredible. If you put aside the politics and the tensions between countries and all the reports about Russian hackers, you’ll see that the real people—the ones who struggle to work every day, get together with their friends on the weekends and wish for love and a happy family—are no different from you and I.

I hope you enjoy Kat and Wolfe’s romance and the very brief glimpse into the Russian culture through the eyes of my heroine. 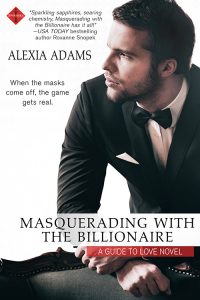 About Masquerading With the Billionaire:

World-renowned jewelry designer Remington Wolfe is competing for the commission of a lifetime and someone is trying to destroy his company from the inside. He’s in for more than one surprise when his unexpected rescuer turns out to be a sexy computer specialist with a sharp tongue and even sharper mind.

Kat Smith is a cyber-security expert and master of disguise. So being assigned to masquerade as Wolfe’s girlfriend while she uncovers who slipped malicious code into his corporation’s computer systems is no problem. But when Kat’s past catches up to her and their fake relationship starts to feel a little too real, problems are all she seems to have.

A former world wanderer, Alexia Adams writes contemporary romance stories that reflect her love of exotic destinations and diverse characters and cultures. She currently lives near Vancouver, Canada with her husband and four children and dreams of a world without housework. As a flight risk mom, romance is her escape and she can often be found with her nose in a book, pretending she’s somewhere else. Check out her website at http://alexia-adams.com and sign up for her monthly newsletter to discover your next escape.

I love history. I also love eerie places. And when the two come together? Bliss! One of the m…

Who can resist the powerful force that drives us to tune in each day, or every week, to our favori…