Sure, it’s not quite “No Woman, No Cry”, but I have found—for me and my particular set of writing braincells—that if I don’t have a songlist for my books…well, I don’t have a book. Sure, I might get something eked out here and there, but eventually, until my characters get some songs to tell me who they are, they just don’t have a whole lot of soul for me to lock onto.

So, I’m looking back at my writing and thought I’d share with you my songs for both the Deadly Secrets series. Now, first, for you to understand, you have know where Deadly Secrets takes place—in a small mountain town up in San Bernardino. Now, unless you’ve been out to California’s Inland Empire, it’s really hard to understand the vibe to expect.

See, in the winter, in the mountains, you’re going to get snow. Like, a LOT of snow. And things can feel really dismal and dark, with the starkness of the mountains against a sky quilted by dark clouds. But in the summer? Sweet Lord, the dry, soul-searing heat makes you want to forego clothes and live in a pool of water for the rest of your life. Skin can drink, right? And no matter what time of year it is, you’re going to see men in cowboy hats and boots that have taken more of a beating than your first car—except these suckers are still expected to run. Picture everything scuffed and distressed from hard sun, hard life and hard weather. But what sound does all of that make?

For me, it sounds like dark, dirty, southern country full of sultry twang and since Deadly Secrets involves some dangerous characters and more than a couple dead bodies, it’s also slightly menacing. So when I mentally roll into town, I start with the menace and play “Ticking Bomb” by Aloe Blacc:

Can menacing be sexy? Lets find out!

For the first book, Convicted, I had two very strong characters I was focused on—Katrina and Cade. As you can imagine, they had very different personalities. Cade is brooding and dark and dangerous. It won’t do if I’m in a Cade frame of mind when I need to write a very playful, sensual Katrina scene. (He’s just not the kind of man who swings his hips like that, you know?)

My Go-To song to get into Cade involved a lot of heavy guitar, The Black Keys, “When The Lights Go Out”:

But when I needed to conjure Katrina, there was only one song that was bad-ass enough to do it: Beast (Bioshock Infinite Extended Version) by Nico Vega (Carefull, it gets REAL loud at the 0:27 second mark!)

If I needed sexy Trina, I ran straight to “Black” by Kari Kimmel:

Now, Wanted, however, had a different vibe altogether. While Cade and Rick come from similar places, both being scarred Marines who could single-handedly infiltrate a small country and take it over, Rick’s scars are completely different. And Marketta, their small town, is his childhood home. It means his heart is right there, every where he looks. Especially since his heroine, a baker named Whitney, is a much softer character than Katrina. She’s not a leather-wearing biker who can kill a man with her bare hands. She’s a woman who wears her heart on her sleeve and the fact that she’s in love with her childhood best friend—ahem, Rick—is not a secret.

So, what should you hear when you read Rick? Try Ed Sheeran’s live BBC version of “I See Fire”:

And Whitney? She was actually really hard to peg down, this seemingly soft woman with a strength that carries her through tragedy after tragedy, until Rick realizes she might be stronger than he ever was. The song that worked best was “Silhouettes” by Of Monsters and Men:

And that’s it! You’re now officially able to mentally visit Marketta. All you have to do is turn start with Convicted!

PS—it’s free this week! So be sure not to miss it!! 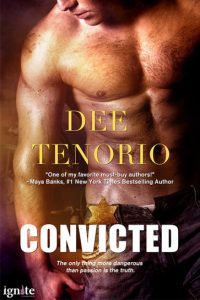 The only thing more dangerous than passion is the truth.

Former Marine and new Sheriff’s Deputy Cade Evigan is hanging onto his damaged soul—and his personal code—by a thread. His current mission? Weed out a violent motorcycle crew from a small mountain town. The problem? Katrina Killian, a woman standing firmly on the other side of the law, smack in the middle of the gang he’s there to destroy. She may get under his skin, but the sultry biker has criminal written all over her. So why can’t he see her like any other convict?

For two years, Katrina has been a DEA agent hiding in plain sight amidst a pack of killers, working to put an end to the gang that has terrorized her hometown. The last thing she needs is to fall in love with a man who could blow her cover—and her heart—to pieces, but Cade’s become an addiction she can’t break. Unable to risk either of their lives with the truth, she plays both ends against the middle to keep him safe. But lies can only last so long, and Katrina’s time has just run out… 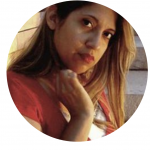 Dee Tenorio has a few reality issues. After much therapy for the problem–if one can call being awakened in the night by visions of hot able-bodied men a problem–she has proved incurable. It turns out she enjoys tormenting herself by writing sizzling, steamy romances of various genres spanning paranormal mystery dramas, contemporaries and romantic comedies. Preferably starring the sexy, somewhat grumpy heroes described above and smart-mouthed heroines who have much better hair than she does. The best part is, no more therapy bills! Well, not for Dee, anyway. Her husband and kids, on the other hand…

The blog tour for Flirting to Win by Natalie Anderson has officially kicked off!  Natalie will be vi…