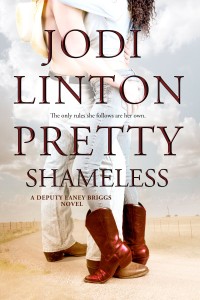 Not Your Everyday Prince Charming

I’m a lover of romance, and I’m a lover of suspense. Give me grit, give me heartbreak, and give me that body-melting kiss which has the capability to make time stand still. Make me believe in true love, but also show me that perfection is nowhere near attainable. Yet in the end prove to me even though you might have flaws, be a cocky-shit, or have a weakness to be a people pleaser (messy or clean) you still care.

All this and more was the basis behind Texas Ranger Gunner Wilson in The Deputy Laney Briggs Series. When I set out to write the series I knew to make it work I needed a hero that was her exact opposite yet complimented Laney in every way. He had to be hard, funny, complicated, trouble with a capital T, hold a position higher up then hers, and be madly in love with Laney.

Some might consider him a cocky asshole, but just as I have grown with each new chapter in their saga so has he. I’ve come to the understanding that he is very mixed up, in life, in love, in work. His parents were murdered at a young age, and his driving force (besides the woman he loves) is revenge. I never set out to be a trueblue romance writer. I’m a risk taker, and a writer that at every corner tested the limits of what a romance novel is supposed to be. Some reader might find Gunner a coldhearted bastard while other will be asking how quickly can I shuck the panties.

Me? Well, I see Gunner Wilson as the man I fell in love with; the I’m-real-and-I-have-flaws-but-hell-girl-don’t-hold-it-against-guy- that gathered me into his arms and whispered sweet nothings. My wish is that readers see themselves in Gunner Wilson and Laney Briggs and root for the Happily Ever After no matter how messy the road might be until the finale saving grace. Because as we all know…no one has clean hands.

“Come on, Gunner. You can trust me,” I purred, my voice sounding like a Hooters waitress laying the charm on thick to get a big fat tip.

I had one hand toying with the hem of his snug black T-shirt, my hips grinding into his Wranglers. The way that zipper fly was bulging against my thigh almost made me forget I was on the attack. “You can tell me. I’ve always been good at keeping secrets.”

Gunner looked pained. “Again, it’s privileged information, Laney.” He leaned in closer, grazing his five o’clock shadow along my chin. “Damn you smell good,” he said, sucking in some air. “Buy the lavender soap at the Piggly Mart again?”

I hooked my thumbs in his belt loops and tugged, pulling him into me. “Why are you all of a sudden acting so serious?”

He always did have a hard-on for the slutty-bimbo type. A low, throaty groan tore from his chest when he dipped his mouth toward mine. My lips parted, welcoming him home. I felt his tongue skim my teeth, and then he swallowed my moan with a hungry kiss. Aw hell, he tasted like homemade vanilla ice cream, a little too sweet, but so sinfully delicious. Maybe I hadn’t completely thought this through, because the way he was kissing me torched any comeback as a raging wildfire of pure undignified lust burst throughout my entire body. On a long, hard caress, he forced the tender embrace deeper and pulled my tongue into a tantalizing dance with his. Savoring the moment, he wrapped both arms tighter around my waist, and wasted no time to teach me each one of his smooth moves.

And damn, did I want to be schooled.

Gunner broke the body-aching kiss, and before I could say “more” his mouth touched my earlobe, and then he whispered, “Word has it that Wyatt might be in deep with Manny Sanchez.”

I feathered my lips across his stubbled chin, inhaling the richness of his aftershave as I said softly, “Who’d have thought.”
“You might wanna run out there and check.” He half moaned.

Leaning in, I placed my mouth inches from his neck. “Thanks,” I told him before jabbing my red boot down on his foot and storming off to the cruiser, leaving Gunner to deal with his erection and holding his foot.

Find out more about Pretty Shameless
Only $0.99 for a limited time!

We cannot believe how fast time is flying!  We’re just a little over two months away from our …