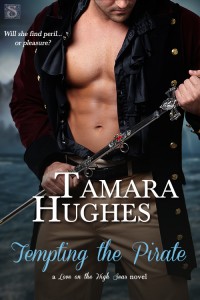 Tempting the Pirate is an adventure story about a pirate searching for his lost brother but finds instead a spitfire stowaway he must protect from his crew. Well, that’s what the story is now. The first nugget of an idea that popped into my brain was a whole lot different.

Believe it or not, this book started out in my head as a Tarzan type story. I envisioned a woman escaping a burning ship and ending up on an island with a man who’d never seen a woman before. I’ve always enjoyed Tarzan movies, and still would like to explore what that relationship would be like, but as I tried to figure out the plot of this book, things got out of hand.

Before I knew it, my Tarzan guy wasn’t really a Tarzan. He was just pretending to fool the natives in order to spy on the pirates who congregated on the other side of the island. I think by now you can see why I abandoned this bizarre story and turned to what was going on with the pirates instead.

I kept the girl on the ship though, and as before, she was fleeing a marriage. The guy, however, changed completely. As I delved deeper into who these characters were, I became intrigued by the thought of a Casanova type hero meeting a woman who distrusts all men. I found this push and pull between them fascinating. And I also got to learn about pirates.

Of course, some pirates were ruthless and cruel, but they had a code of ethics you might say. They called the laws they followed articles, and every man who signed on the account had to vow to follow them. Many pertained to punishment for hiding loot, desertion, or how to settle disagreements (Walking the plank wasn’t one of them. According to several sources, Hollywood created this idea.).

Surprisingly (at least for me), the captain and quartermaster were elected to their positions. In fact, the ship was essentially owned by the crew. In many respects, this life could be far easier to take than that of a Royal Navy man. The Royal Navy during this time was about as ruthless as pirates when it came to filling their ranks. They would trick or kidnap men into becoming crewmen, locking them below decks whenever the ship reached port to make sure they didn’t escape. At least the pirate crew got a share of all plunder out of the deal.

Tempting The Pirate is the first book I’ve written in the Georgian time period and it was a joy to write. James and Charity were such a fun couple. I hope you enjoy reading their story, and who knows, maybe someday I’ll have a Tarzan book you might like, too.

Find out more about Tempting the Pirate
Only $0.99 for a limited time!

Behind the Book: Callie Hutton

Behind the Book with Jodi Linton

The Sins of a Few by Sarah Ballance The moment he returns to his hometown, Nathanial Abbot kn…