Hello! I hope you all are enjoying your holiday so far! I know I am! I’m Diane Alberts (but I also write as Jen McLaughlin), and I write mostly for the Entangled Brazen line! I’ve been buried in Christmas trees, lights, eggnog, and fictional hot men…

Wait, what? Did I say that out loud?

Favorite Holiday Food: All the PIES!

Being with family, crackling fireplaces, and all the decorations.

The need to buy ALL THE THINGS.

About Seducing the Princess 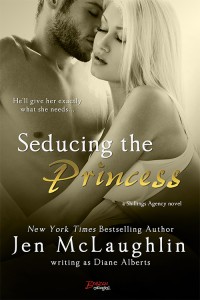 Gordon would buy Isabelle a bike, because as a Princes,s she never learned how to ride one. And then they’d go biking through the hills of Maldeva, and lose themselves in the woods for a romantic, sexy afternoon of fun.

Isabelle would get Gordon an Xbox One, because he likes playing shooting games, and he kind of misses living a life as a private security guard, but she doesn’t want him to actually go out in the world shooting at things–or worse, getting shot *at.*

Gordon would hang mistletoe under every single door in the castle, because then he’d have an excuse to kiss her every time they walked into a room…not that he needed one, of course.

He lowered his face to hers, their lips a scant inch apart.

“Are you sure you want this? I’m only going to ask you this one time. You’re a grown woman, so I won’t ask you if you’ve changed your mind every other step we take toward that bed.”

“I want this.” She reached out and curled her hands around his nape, her fingers brushing the soft curl that rested just below his ear. “I want you.”

“Then you’re mine,” he said. “You have been since you sat next to me in that coffee shop.”

She nodded frantically, needing him to get on with it. To claim her. “Yes. I’m yours.”

He growled and closed the distance between them, his lips crashing to hers. The second they touched, she knew that this would be unlike any experience she’d ever had. Gordon was undeniably sexy, and she was attracted to him more so than she’d ever been attracted to another man before, but that wasn’t what would make this so different.

It was him, and the way he made her feel. Every single caress, every soft move he made, sent a surge of lust crashing through her veins. He said he’d own her tonight, and he was right. He totally did.

Find out more about Seducing the Princess

Under the Mistletoe with Jodi Linton

I like to watch TV. I know Stephen King says writers shouldn’t, but he must be made of stronger stuf…

Secrets and Sins: Raphael  by Naima Simone Some sins have dangerous consequences…  Special $0.…