I’m Margo Bond Collins, and I write for Entangled’s Red-Hot Bliss line. Like the heroines of my Hometown Heroes series, I live in Texas, near Fort Worth. Although writing fiction is my first love, I also teach college-level English courses online. I enjoy reading romance and paranormal fiction of any genre and spend most of my free time daydreaming about heroes, monsters, cowboys, and villains, and the strong women who love them (and sometimes fight them).

In Texas, the weather often doesn’t really cool down until December, so I love the crisp winter air. I also love the holiday lights. My small hometown has a beautiful downtown square with an adjacent park, and the local business owners and city council go all out decorating for the holidays. I could (and often do) spend hours wandering through the glittering, shining lights.

I hate how harried everyone can get. In a season that is meant to be about giving, it’s all too easy to get caught up in finding the “perfect” gift, getting the best deal, making sure that we are first. I think it’s important to remember to stop and be thankful for what we have rather than focusing on getting more.

About Taming the Country Star 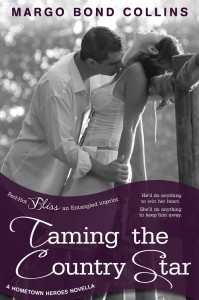 Cole’s perfect gift to Kylie is a Christmas love song that he wrote himself. He’s a country music star and could buy her anything–but best thing he can give her is something that can’t be bought.

Kylie’s perfect gift to Cole is a hand-printed gift certificate that he can “redeem” for her attendance at the Country Music Awards ceremony. He knows that she hates being in the spotlight, so this is a gift that shows she loves him enough to overcome her own fears.

“You know,” she said, “until I met you, I didn’t really pay attention to music. It was something in the background. And I didn’t pay attention to tabloids either.” She peeked up at him from beneath her lashes, and Cole’s breath caught.

“Do you now?” he asked, giving in to the urge to move closer to her.

“Do I what?” Her voice had gone breathy.

“Yes.” He was close enough now that his breath fluttered through her hair.

Cole wasn’t sure if she was answering his words or his actions, but suddenly he didn’t care. He reached down to cup her face and leaned in to kiss her.

She didn’t move as he grasped her shoulders and pulled her in toward him.

She wrapped her arms around his neck and he pulled her as close as he could. The touch of her mouth was electric as he teased her lips open with his tongue.

He felt, more than heard, a tiny moan escape her, and he deepened the kiss. She returned it with equal fervor, her lips moving feverishly against his. His breath caught in his throat. He had missed this so much.

He swelled as her breasts brushed against his chest, and his fingers tangled in her hair, his knuckles grazing the brick wall behind her.

Find out more about Taming the Country Star

Under the Mistletoe with Tracy March