Nollaig chridheil!( nollyk chree-ell ) Say it with a deep, sexy brogue and you have one of my Highland heroes wishing you Merry Christmas under the mistletoe. I’m Heather McCollum, author of Scottish Historical Paranormal Romance. My Highland Hearts series is full of adventure and love, interwoven within the drama of British history and wrapped in white magic.

When I’m not writing about alpha-males in kilts brandishing claymores, I’m shuttling my three kids around in the wilds of suburbia on the mid-Atlantic coast. I’m also a dog-mom of one crazy but lovable rescued golden retriever, guinea-pig-mom of three fuzz balls and fabulous wife to my very own Highland hero, who at times even wears his kilt to my book signings.

I collect the Santa Village from Department 56. Every Thanksgiving weekend, after we put up the Christmas tree, I pull out my 25+ lit up houses, working train, and little elf figures.
Hubby sets up the train on a platform he builds around the tree. Then the kids and I unpack and place the village while Christmas music plays in the background. Sometimes there are squabbles about where things should go or who will inherit which house 100 years from now after I’m gone, but for the most part it’s a lot of fun. After the kids go to bed, I move the elves around where I really want them : ) It’s a fun holiday tradition that I hope never to miss.

That would be the @#*& gingerbread house. My kids insist on building one. I used to let them help me “glue” it together with icing, but the process would always end up with at least one of us in tears. Now I buy the pre-put-together house and just let the kids decorate while I’m in another room. It works much smoother now, but I still have to find a place for the crumbling candy house to sit and get stale throughout the holiday. 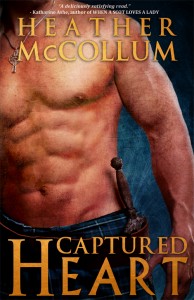 Things like trust and the protection of his clan are hard to wrap so I’ll go with something else, but Caden would surely give those things to Meg. Since Meg’s mother’s journal is so important to her, Caden would probably gift her a beautiful writing journal of her own and a quill set so she can record her medical advice and wisdom and thoughts for their children.

He’d also gift her a beautifully etched sgian dubh, a black-handled short blade, and teach her how to hide it on herself to use in defense. No Highland lass should be without one, just in case.

Meg would want to give him some type of body armor to keep him safe, but she’d know he wouldn’t wear it. So for under the tree should would put a box of colorful threads that she would use to start a new tapestry for the great hall, one depicting the glorious end of the 100-year feud with their wedding.
In private she’d gift him a hand-woven Macbain sash. She’d give it to him by wearing it around herself like a bow, the sash and nothing else.

Caden would hang mistletoe from the low ceiling of a special cave in the third mountain to the right behind Druim Castle. Just like the world around them, despite the cold and dark, warmth and love can be found in the heart if one searches for it.
He would lay a bed of furs and build a fire under a hole that vents to the open air out of the side of the mountain. Meg and Caden would eat and spend the night there, tucked away from the world together. Sigh…

Meg has walked down into the great hall of Druim Castle at night and finds Caden cleaning his sword. Meg has the magical power to heal and can tell what is happening inside someone’s body just by touching them.

“The world is dangerous for a lass and even more dangerous for a witch.”
Her eyes narrowed as she stared up at him. “Don’t call me that.”
“Have ye put a spell on me?”
“I can’t do that,” she snapped. “If I could, the world wouldn’t be so dangerous for me, would it?”
Caden pried her hand from her robe and placed it flat against his heart. The contact of her skin against his burned through him. He inhaled her scent, warm woman and summer flowers. He hardened beneath the kilt. “Meg, I learned as a boy to control my mind, my will, my strength.”
She swallowed again.
“What do ye feel in me now?”
She hesitated. “I…your headache is gone. Umm…your stomach is working. Your heart is beating most rapidly.”
“As fast as yers?”
“Perhaps.”
“What else?”
“Your blood is flowing fast. Your…” She blushed deeply and her eyes dipped to his kilt and then back up to his eyes.
Caden stared down into her eyes and touched her chin. “I control everything about me. My mind, my body. When ye smile.” He rubbed his thumb across her bottom lip and it dropped open slightly, showing her teeth. He moved closer, so close that her short breaths fell against his own lips. “I am always in control, but ye, lass, are making me lose it.”
Caden’s lips touched hers with restraint. Then the softness, the sweet honeyed taste of her mouth, crashed through the walls he’d erected. He pulled her into him, encasing her in his arms against his body. If she’d have stiffened just a bit, resisted, it would have snapped him back to the familiar confines he placed on his actions, but she didn’t. Meg melted into him, her slender, softly rounded body melding into his muscle-hard chest.
His mouth slanted against hers and Meg let out a little moan. That small sound, barely audible at the back of her throat, had the effect of five cups of whisky. Her hands crept up to his neck, fingers catching in his hair. He explored her sweet rounded backside, lifting her to fit intimately against him. No resistance—nothing but warm, awakening passion. He raked a hand through her hair to cup her head.
Meg kissed him back, her hands reaching around to touch along his jaw, down along his bare chest. The kiss ended as they both sought breath against each other’s lips.
“Your heart is wild,” she murmured.
“Strong enough to withstand hours of battle or one of your kisses.” He feathered another one across her lips before lowering her. Caden still hugged her into his chest, not yet ready to release her. Hell, he’d never be ready to release her. Damn, what was he doing? She was a captive, a pawn to force peace. He was using her to save his people.
He relinquished his hold and pulled back. “Like I said, lass. ’Tis dangerous to walk the halls at night.”

Find out more about Captured Heart

Under the Mistletoe with Talia Hunter

What if you were a woman who’d never had a chance to develop her own interests, who took on t…

Coleen Kwan is giving us some Straight Talk When you are getting ready to start a new book, what’s t…