Hey all! I’m Katee Robert and I’ve been with Entangled for years and years and years. We’re like an old married couple, except the sexy books just keep on coming. Heck, if I’m going to be honest, they’re even getting HOTTER. AHEM. I digress. But I write for the Brazen line, and I have a whole lot of fun doing it!

The food! No one is surprised, but I’m all about the winter food goodness. We get homemade candy and pies and turkey and… I’m getting hungry just thinking about it. But, to me, there’s nothing better than the family gathered around a table of homemade food and chatting and joking and just generally having a hell of a time. It’s my happy place.

Also to file under “No One Is Surprised”… The COLD. I hates it. My husband is one of those alien folk who get all giddy when it drops below freezing temperatures, but I’d rather go for some partly cloudy and 65 degrees. Someday, over the rainbow, I totally plan on being a snowbird and heading south for the coldest months.

About Mistaken By Fate 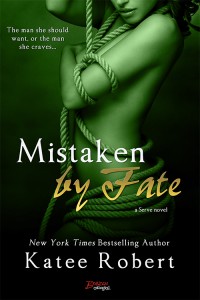 A weekend away in a 5 star hotel (he spends enough time roughing it for his job…she wouldn’t take him to the mountains). She’d get him out of the city and spend a few days getting him to relax–the one thing he’s not particularly good at.

Ridley would totally show up to a date with Garrett with mistletoe dangling from her belt. And he’d love that she was so devious.

Garrett circled around to her front and took her chin
in his hand. “That was your punishment. Are you ready to
move on to your reward?”

She nodded before she realized he wanted a verbal
answer. Well, she wasn’t forgetting how to address him
properly again. “Yes, Sir.”

“Good girl.” He kissed her, teasing her mouth open,
seducing her through that single contact. It was soft and
sweet, almost like an apology. She sank into the feeling of
his tongue against hers, needing more. When he finally drew
away, she couldn’t stop her moan of protest, but he wasn’t
done with her. He traced a single finger down the center of
her body, stopping just south of her belly button. “It’s time,
baby.”

Find out more about Mistaken By Fate

Under the Mistletoe with C. M. Stone

This week we are celebrating our favorite Book Boyfriends on Embrace. Today the stars are shining on…

Unfortunately, my author life doesn’t start right away.  Between getting all of us rea…

Anna Kendrick and Sam Rockwell in Mr. Right   I’m not sure how I missed this when…