We’re so excited for our new release, Rising Assets! It deals with something we all dread and hate, and yet swoon over… secret crushes. All the angst, all the does-he-know? or should-I-do-something. Yeah, secret crushes can suck. But they can also turn into the greatest happily ever afters.  It got us thinking. Everyone has a secret crush story, and so we are challenging you to share that story. The worse the better, hold no punches… Although it may be tough to beat Colton and Melanie’s story, so good luck!

Share your secret crush story in the comments below! Entries will get 10 extra points in the giveaway below.

In the meantime, we’ve got a story of our own from Rebecca Zanetti. She’s kicking things off with her secret crush story. It’s the story of how she fell in love with her best friend…

So, I was home for the summer before starting law school, and my sister dragged me out one night to party.  I’d just broken up with somebody and may have been a little mopey.  Okay.  Really, really mopey.

We walked into a bar in town and ordered a couple of drinks.  Deb nudged me and pointed toward the bar.  “That’s Tony Zanetti,” she whispered.

I turned and I’m pretty sure my mouth dropped open.  I may have said something not exactly ladylike.  You see, we’d known Tony as kids, and he was a super sweet, slightly pudgy, rather serious kid.

The guy at the bar was six foot five, had long dark hair, a tattoo, and was solid muscle—and incredible light brown eyes and strong facial features.  In addition, he wore a leather jacket, biker boots, and had sat a motorcycle helmet on the bar stool next to him.  So I decided to go up and say hi.  (Okay.  My sister physically kicked me out of the booth with both her feet until it was either fall on the floor or stand up.  At that point, why not say hi?)

I would really like to tell you that I said something smooth, something funny, or something sexy.  Instead, I said, “What the hell happened to you?”   I meant it nice like he grew up nice, but…

Good thing Tony has a sense of humor, because he slowly smiled and bought me a drink.  To this day he gives me a hard time about my opening line.  But during that day, we became friends again.

We went to movies, to parties, to the river, to the beach, to dinner, on motorcycle rides…as friends.   I think it’s fair to say I had a crush on him, but I don’t thinks it’s all that accurate to say it was a big secret.  J  We’d both just gotten out of relationships, and we took it a little slow.

Then one day I was sitting on the counter in my kitchen, talking about law school, and he kissed me.  Out of the blue.  And it was a great kiss—one of those where you can’t breathe or think all that well afterward.  So I asked him, “What was that for?”  (Yeah.  Still smooth).

He just smiled that slow smile again and said, “I figured it was time.”

There’s something about that first kiss that changes everything.  In Rising Assets, hero Colton Freeze plants one on his best friend, Melanie Jacoby…and suddenly they need to decide whether they want to be friends with benefits or a whole lot more.

I hope you enjoy Rising Assets, and thanks for having me over to play today! 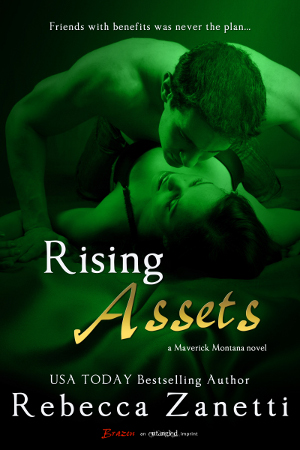 Friends with benefits was never the plan…

Melanie Jacobs is in trouble. With three jobs—including running her ranch—and dwindling funds, she’s exhausted. Not to mention desperately trying to hide a secret. Unfortunately, her best friend Colton Freeze knows all too well that’s something is going on, and he won’t give up until he knows exactly what he needs to fix.

Then Colton learns the truth—that Melanie’s future happiness rests in the fickle hands of fate, and her chances for having a family are shrinking with every passing day. Her only comfort is Colton, but when a heated argument between them turns into an even hotter kiss, the boundaries of their friendship are erased, leaving only a scorching-hot hunger for more.

Every kiss—every touch—is a stolen pleasure. But will their new friends-with-sexy-benefits arrangement bring them closer together, or destroy everything they once shared?

Behind the Book with Rising Asset's Rebecca Zanetti

Everyone hears about those crazy stories about what happens in Vegas stays in Vegas.  Sherry and Tyl…

What happens when you gather a large group of romance authors, cover models, readers and more in Las…