I’m one of those people who still gets as into Christmas as an adult as I did when I was a kid. I don’t care too much about getting presents, but I love shopping or crafting gifts for other people, the cooking, the decorating, the music, the hot cocoa, and all the rest.

As for mistletoe? It’s never been a big tradition with me, but now that you’ve got me thinking of it, I have a couple ideas of where to stash it…

Favorite Holiday Song: Carol of the Bells. The more dramatic and gothic the version, the better!

Favorite Holiday Food: Fruitcake. I know, I know… but c’mon. It’s booze and cake! What’s not to love?

It’s a real tossup between decorations and the music. My Christmas tree went up the first week of November and right around Halloween is when I started playing Christmas carols.

I live in Wisconsin and close enough to Lake Superior to get lake effect snow, so…the white stuff making all the holiday shopping and visiting so much more difficult!

About One Night in Vegas 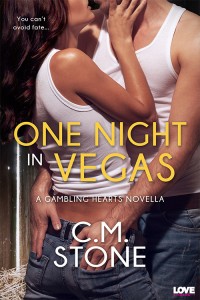 A weekend stay in a cozy–but not too rustic!–cabin set in snowy Mount Charleston outside of Las Vegas. It’s the place where they first kissed as teenagers and they’ve never been back together since. They have some lost time to make up for.

A scenic painting of his horses and the desert, to make his house feel more like a home.

In the barn, because it’s the last place to look and a great place to kiss. And if Chris made a terrible “roll in the hay” joke, Eliza might be the only person in the world to find it charming.

She laughed and shook her head, then leaned back to look up at him. Her eyelids were heavy-lidded, lips curved into a smile. No saint could possibly resist such temptation. He ducked to brush her lips with his. The first bit of contact made her gasp and his heart skipped a beat before her lips began to stroke his. She turned in his arms slowly, twisting around to make the kiss easier. Her hands came up to bury themselves in his hair, drawing him into the kiss, though he needed no encouragement.

His hands settled at the small of her back, just above the tempting curve of her ass. The observation car played music with displays on the panels behind him and he was sure the view out the front was spectacular, but a team of wild horses couldn’t have pulled him away from that kiss. His lips opened against hers, his tongue lightly teasing at the seam of her mouth. When she parted her lips with a soft sigh he plunged past them to claim her. He explored and tasted, gratified when her tongue met his and wrestled with him for control of the kiss.

The kiss drew him further and further from his senses until his hands slid down to grip her ass and pull her closer. He leaned against the back of the car, absently thinking that the last time he’d kissed her, it had been her back pressed up against something instead of his. He could almost smell the pine again as ancient history came tumbling back to life. Women he’d slept with haunted him less than this. Maybe it was just the unfinished business of it—he wasn’t really sure—but he knew one kiss every ten years would never satisfy him. She was different. Older, more experienced, full of curves that had just begun blossoming back then, but for a few heartbeats, he could almost believe time had stood still.

Find out more about One Night in Vegas

Under the Mistletoe with Katee Robert