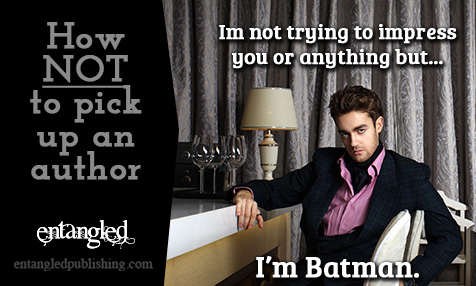 I have never been the victim of a bad pick-up line. Should I be insulted by that? Or heartened? I don’t know. I’ve been told by my guy friends that I’m unapproachable. That I exude some sort of penis relaxant that wafts through the air and warns men to stay far, far away. Apparently my husband was able to obtain some sort of antidote that allowed him to breach my scrotum softening brew and slay dragons on his way to land me. But yeah, not a single bad pick up line to be heard.

HOWEVER, I have fielded numerous bad pick-up lines on behalf of my friends. In the past. A long, long time before I took the blissful journey toward the altar.

Is your friend single? Your friend is a smoking hot. Does your friend work out? Well, THANK YOU, sir. Those kind of compliments are exactly why I shaved my bikini line this evening. I wanted to hear all about how good my friend looks in her low rise, thrift shop jeans that she NARROWLY beat me to this afternoon at the Beacon’s Closet consignment shop.

When a man says something like this to you, how does he expect you to react? Should I whip out a clipboard with a list of my friends tucked neatly under the metal clasp? Headline: WHO IS THE BEST PAIRING FOR RANDOM DUDE? Am I some kind of one night stand sommelier? No. That test is too hard and I don’t have time to study. I’m too busy shaving my bikini line for douchebags like this one to ignore. FINE. Don’t comment on the smoothness or the obviously expert execution of my Lady Bic, fuck you very much.

The worst, and I mean the absolute worst, is when your friend goes home with one of these guys. Among my crew of girlfriends, however, there is specific set of rules. The first AND ONLY rule is this: don’t be a cock block. And so after a period of time I realized something, WE ARE THE ONES HAVING THE ONE NIGHT STANDS. Not the men. My friends are the ones sorting through the offerings and saying, “Yes, he’s not THE ONE, but he’ll get the job done.”

The subject of the post was supposed to be about the worst pick up line I’ve ever received. I haven’t received one, thank god (if you haven’t guessed, I’m protecting my husband’s feelings – he had to start a conversation with me somehow). But, on a serious note, I’ve learned over time that you shouldn’t judge someone on that opening line. We’re all a bunch of chickens out there trying to find someone to bump uglies with. Don’t judge someone by their opening line, judge them by their closing line. 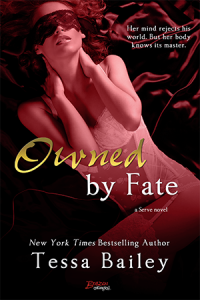 Behind the Book with Amy Andrews

I’ve seen a lot of ships about characters who have been a couple, but what really gets me are…

Who said tempting a sweet Southern belle would be easy?  See what happens when a Southern Belle fall…

We are excited to announce the blog tour for the Bliss anthology, Stranded with a Hero, which includ…