Just recently, I found a new binge worthy show on Netflix. It’s called Hart of Dixie. It’s about a NY medical doctor who is offered and then takes a practice down in Alabama.

OMG, it’s so cute! It has humor and heart and, needless to say, romance. But what makes this show so awesome to watch are the sparks between Zoe (the doctor) and Wade ( the bartender in town). SWOON!

Now, Zoe’s had many men interested in her, and she’s dabbled in some other relationships as well, and Wade is a bit of a playboy—however, without a doubt, I totally ship them.

Of course, like any true great romantic couple, Wade and Zoe didn’t always get along…

Wade is such a bad boy and gets under Zoe’s skin. A lot…

But honestly, who can resist that face?

They’re just too cute together.

And Wade does have his serious moments.

I’m in Season Two, and they finally have somewhat of a relationship going on now. THANK GOODNESS. They totally belong together. You can see why…

Convinced?
Well, check out Hart of Dixie and see for yourself!

For a LIMITED TIME, get Wrong Brother, Right Match by Jennifer Shirk for 99¢! 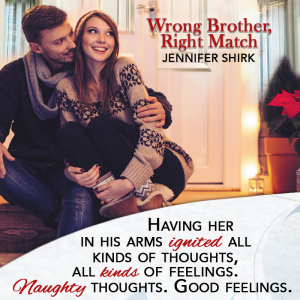 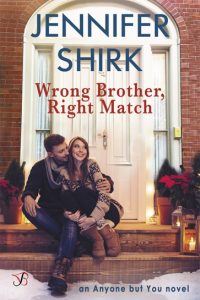 Matchmaking guru Kennedy Pepperdine’s life is perfect. Perfect job. Perfect friends. Perfect boyfriend. Except…when she gets trapped in an elevator with a handsome stranger, she accidentally confesses a secret: maybe her perfect boyfriend, Justin, isn’t so perfect for her after all. But a matchmaker should be able to successfully match herself, right? Thankfully, she’ll never see the handsome stranger again. Until she heads home with Justin for the holidays and learns that the sexy stranger is none other than Justin’s older brother, Matt.

Matt Ellis is trying to be on his best behavior for his mother—it is Christmas, after all. But when he recognizes the beautiful woman from the elevator—the one he hasn’t been able to stop thinking about for months—his best behavior is being held by a thread. Matt’s always sacrificed for his family, and nothing is more important than their happiness, but the more time he spends around Kennedy, the more he wonders if her supposed “right match” might just be the wrong brother. 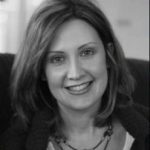 Jennifer Shirk has a bachelor degree in pharmacy-which has in NO WAY at all helped her with her writing career. But she likes to point it out, since it shows romantic-at-hearts come in all shapes, sizes, and mind-numbing educations. She writes sweet romances (some even funny!) and won third place in the RWA 2006 NYC’s Kathryn Hayes Love and Laughter Contest with her first book, The Role of a Lifetime. Recently, her novel Sunny Days for Sam won the 2013 Golden Quill Published Authors Contest for Best Traditional Romance. She’s a board member for Straight Ahead Ministries, an organization involved in helping spread the gospel and aiding medical and pharmacy students in Russia. She’s also a board member of the Ocean City Library Board of Trustees. She resides in a beach resort in NJ, and when she’s not involved in all the above, she’s taking care of her most treasured possessions: her husband, daughter, guinea pig (Rocco), puppy (Sox) and four hermit crabs.

Why I Read Romance with Sahara Roberts

Do You Believe in Insta-Love?