I lived in New York when I read my first Eric Jerome Dickey novel, Milk in My Coffee, and it pissed me off. At the time I’d just gotten out of my on again/off again relationship with my first real boyfriend, D (who just happened to be black) and I wanted to see a white/black relationship work. I’m using black here because D abhorred “African American.” He, after all, never lived in Africa and didn’t think I’d be too keen on being called Scottish American, since I’d never been there. Anyway, I digress. We broke up because we once again got into the “Why can’t I meet your grandma” fight. His grandma, his only family other than a passel of less- 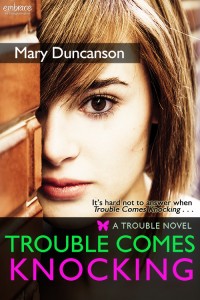 than-law-abiding brothers, was his world. And I, wanting to be a part of his world, wanted to meet her. She, on the other hand, had no idea I was white, nor that I was dating her precious D. So Dickey’s novel excited me. A white girl dating a black guy and things working out (it was a romance novel). Only, turns out, in the end, SPOILER ALERT (though, can you really spoil a nearly twenty-year-old novel?) the chicky actually considered herself black. One drop rule.

Fast forward to now. Now, I’m basically the United Nation of daters. And if a guy wants to hide me from his family, he’s not the right guy for me. In my novel Trouble Comes Knocking, I wanted my main character, Lucy, to have the same approach to guys that I have. Yeah, yeah, she’s dating John, sweet and white…but she is H O T for Homicide Detective, Eli Reyes, spicy and Mexican. There is no apology for the attraction. And, in fact, if you’d ask most people who read the novel, they are Team Eli all the way.

So what’s the deal? Do we truly live in a post-racial world (unlike nearly twenty-years-ago when Dickey had to play it safe?) or is it okay to take more chances now?

I don’t think it’s the first. But I would love for it to be. Lucy’s family, her friends, her inner circle, so to speak, love Eli. There is zero question he is an absolute hottie, plus, he would give his life for Lucy. No one cares about the color of his skin as much as the tightness of his jeans. Still, maybe I played it safe. There doesn’t seem to be as big a taboo about white and Hispanic as white and black. If I’d wanted to make a statement, perhaps Eli wouldn’t have been from Mexico.

But he is. And a statement, I did not make. More, when I thought about who would be best for my hot tamale Lucy, I could imagine no one better than Reyes. Not to say she’s going to end up with him, I won’t spoil that much for you, but Lucy has so much heat and fire…I needed someone who could match that. John is a white-washed version of the boy-next-door. He’s so easy going most of the time that even writing his name makes me yawn. Lucy, meantime, kicks ass. John’s great in that he balances Lucy out, but she’s twenty-two. I wanted her to have less balance, more kablamo.

Maybe that in itself speaks to a change in our world. I didn’t have to worry about Eli’s race when I decided to set him up with my dear Lucy. It didn’t matter that they were interracial as much as that they had the right chemistry. I didn’t have to create some reality where it would be okay, because it just was. I like that. I kinda wish Dickey had a chance to rewrite Milk in My Coffee in today’s world. Perhaps he could have kept her completely white. Who knows?

As for D, his grandma died about ten years ago. Since then, he’s gone on to marry a lovely white woman (attraction is what it is) and they have three beautiful children. I wish things hadn’t been the way they were back then, that we could have dated in peace with no worry over the color of our skin. Still, even though I don’t believe we’re in a fully post-racial reality, I do think we’ve made some amazing strides. For today, I’ll be happy with that.

Behind the Book with Covet Author Aubrie Dionne

Thaw out with new romance!

The Chaos by Christine O’Neil hosted by Rockstar Book Tours kicks off next week! Christine wil…

The Best Blog Post Comment I Ever Left By Laura Kaye   Two Aprils ago, I finished a manuscript …