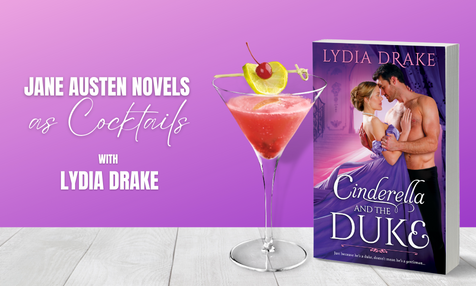 It is a truth universally acknowledged that a romance writer in possession of a deadline must be in want of a stiff drink. Combine that with a love of reading Jane Austen’s novels as a way to procrastinate unwind, and you end up with a very fun, and boozy, pastime. But sometimes when you’re curled up in front of an evening fire, a glass of wine in hand, the Jane Austen omnibus wedged open on your lap, and an unfinished manuscript glowing ominously at you from the computer screen, you may ask yourself that perennial question: what would every Jane Austen novel’s equivalent cocktail be?

And even if that’s not really a perennial question, that manuscript is still unfinished, and that deadline is approaching, and you would rather focus on anything else.

So it’s up to you, gentle reader. You can sit down and finish typing up the draft of your latest masterpiece, or you can spend way too much time looking up cocktail rankings and asking yourself if Darcy and Elizabeth are vodka or gin people.

Given the list below, I think you know which path I’ve chosen.

The Comprehensive (and Probably Only) Jane Austen Novel Cocktail List

Sometimes exact opposites pair together perfectly, much like Marianne and Elinor Dashwood. One is wild and passionate, the other modest and restrained. When it comes to the Pink Gin and Tonic, the same principle applies. One is a strong, flavorful liquor with a dash of Angostura bitters for that extra spice, and the other is, well, it’s tonic. But even though no one craves a glass of tonic on its own, it’s essential to balancing out the potency of the gin. You’d miss it if it were gone, even if you never think about it until someone opens the liquor cabinet and realizes you’re out. Then you have to drive down to the supermarket at ten on a Friday night (and yes it has to be you, apparently no one else can handle such a monumental task) and on the way you think “Wow, this is exactly like a Jane Austen novel.” So in conclusion, Elinor Dashwood is a great mixer, folks. Don’t ignore her.

If it’s good enough for James Bond, it’s good enough for the classiest and savviest of all Jane Austen’s romantic couples. If ever two people would enjoy exchanging cutting retorts while sipping ice-cold Grey Goose out of geometrically precise martini glasses, they would be Elizabeth Bennet and Fitzwilliam Darcy. Only the same drink will do for literature’s most well-matched pair, though I think Lizzie would garnish hers with a twist while Darcy would be all about the salty, often misunderstood olive. (But not dirty, oh no. If a drop of olive juice even touches the drink he will complain to management.)

I don’t know about you, gentle reader, but I have Mary Crawford pegged for a frosé type of girl. Why? A few reasons. One, I could see Mary as the Millennial friend ten years back who thought she invented rosé and was letting the whole group in on this apparently well-kept secret. Two, frosé is a perfect party drink if you want to get a whole bunch of people smashed with minimal effort, all of which is very much Mary’s MO. Three, there’s something extra about looking at a bottle of wine and going “Now how can I make this complicated?” If you think I’m forgetting Fanny Price in all this, that’s because she’s the worst she adds the strawberry for that uncomplicated addition of pure sweetness that will be the key ingredient to everyone’s miserable hangover tomorrow.

I know they didn’t have brunch in Regency England, but if they had Emma Woodhouse would have been the queen of brunch. She would always have a reservation booked at the bougiest place in town even though they don’t take reservations because she’s just got those connections. And then when you sit down and want to order the Bottomless Mimosas, she’s like, oh no. Orange juice, Harriet? I’m sure that’s fine for some people but we don’t all live on a farm. No, the Bellini is the trendy drink of choice. It has that white peach puree mixed with prosecco that just screams the Italian summer. When Knightley and I were in Venice last year… And you sit there going, I know there’s a reason I like this person, I’m just trying to remember what it is, as you seethe into your French toast with Chantilly cream.

The name alone says it all. What better cocktail for a wide-eyed young girl who devours Gothic novels by the truckload? Catherine Morland would also probably love it because with its combo of dark rum and sweet ginger beer it’s one of those perfect “Baby’s First Cocktails.” She would definitely have one too many on her first trip away from home and run around the darkened hallways screaming because she mistook a coat rack for the ancestral ghost of Whimsy Manor, and then she would never get invited on Spring Break ever again. (Not that this stems from any personal experience, you understand.)

Persuasion: Old Fashioned (almost went with Gimlet since it was ‘the favorite of sailors’)

Like Anne Eliot, it’s a conservative choice that is such an old reliable staple it can often be overlooked. And like Anne, it’s a classic for a reason. Smooth and surprisingly flavorful, it’s the kind of drink that maybe doesn’t appeal to you when you’re young. Too unassuming, too, well, old-fashioned. But then a few years later you decide to give it another try because you’re a world-wearied grown up now and wow, turns out it was your favorite drink all along. Who doesn’t love a well-earned happy ending?

Well, thank you for coming on this journey. I’d like to say we all learned something but to be honest I have no idea what that could be. I hope I’ve given you some good ideas for when you next need to procrastinate drink reach for a little inspiration. 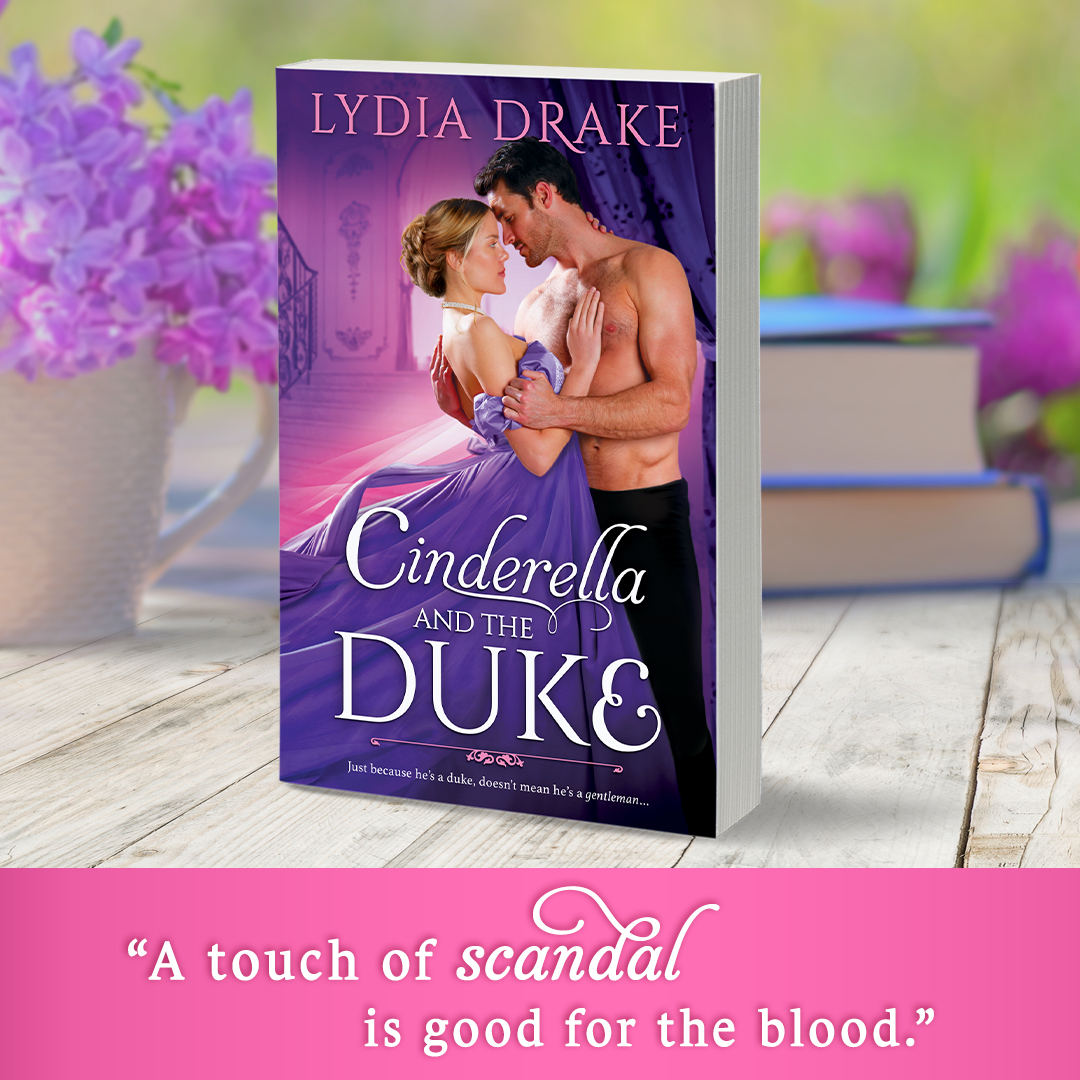 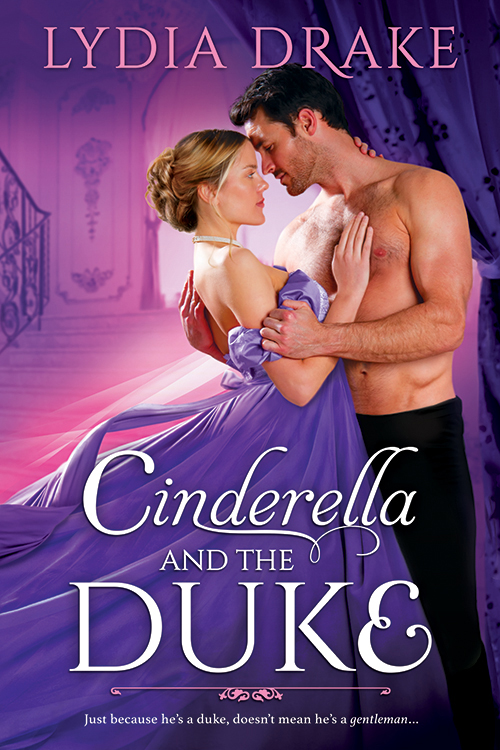 The Weatherford Ball is the last chance Julia Beaumont has to escape the clutches of her horrid stepmother. Any potential husband will do—rich, poor, even a reasonably well-groomed walrus. But all of Julia’s matrimonial chances are completely obliterated…thanks to the actions of an infuriating and utterly rakish duke.

Gregory Carter, Duke of Ashworth, would never risk his cherished bachelorhood by flirting with marriage-starved debutantes. But one look at the luscious and refreshingly clever Julia, and he simply can’t resist a stolen kiss—scandal be damned. Then just as things start getting deliciously interesting, the lady flees…leaving only a slipper behind.

And it must have been one dandy of a kiss. Because now Julia has proposed to him. After all, the lady needs a husband, and this roguish duke will certainly do. It’s simply a matter of making him the perfect scandalous offer…

Lydia Drake is a reader of all things romance and a drinker of all things tea. A New Jersey resident, her favorite activities include taking the train to New York City, scouring used bookstores, spending time with her family and wrangling her hyperactive cockapoo puppy. Cinderella and the Duke is her debut novel.

5 Things I Learned From a Career Change with Amanda Usen

Top 5 Ingredients in One Night Stand After Another

Travel Tuesday: Paulina Lake, Oregon   Nature inspires me, so I love to get out in it wh…