Every writer has a different process. I’m one of those that needS silence to be able to write. If I have music on, I’ll get distracted or sing rather than write. That being said, I do get inspiration from music. Here’s a song list that I listened to while working on BJORN CURSED, Forgotten Brotherhood Book 4.

The idea for the Forgotten Brotherhood series was partially inspired by the Five Finger Death Punch song “The Wrong Side of Heaven.” The lyrics “I’m on the wrong side of Heaven but the righteous side of Hell” perfectly describe the members of the Brotherhood. This is an incredibly powerful song. If you’ve never heard it before, you should.

Many of you might not recognize the band Fever Ray or their song “If I Had a Heart,” but if you’ve watched the show “Vikings” you’ve heard it in the opening credits. Bjorn from Bjorn Cursed is a Viking, and this seemed like a very fitting song for him.

The song “Soldiers” by the band Otherwise is one of those songs I love from the first time I heard it. It’s about fighting for what’s right, for standing up no matter how tired you are or how many times you’ve been knocked down.

2Cellos version of “We are Now Free” from the movie Gladiator brings to mind warriors fighting a seemingly never-ending battle. It always inspires.

Last but not least is Svrcina’s “Meet Me on the Battlefield.” Such a poignant song.

While I may write in silence, music has a place in my writing process and has helped to inspire many books and series. 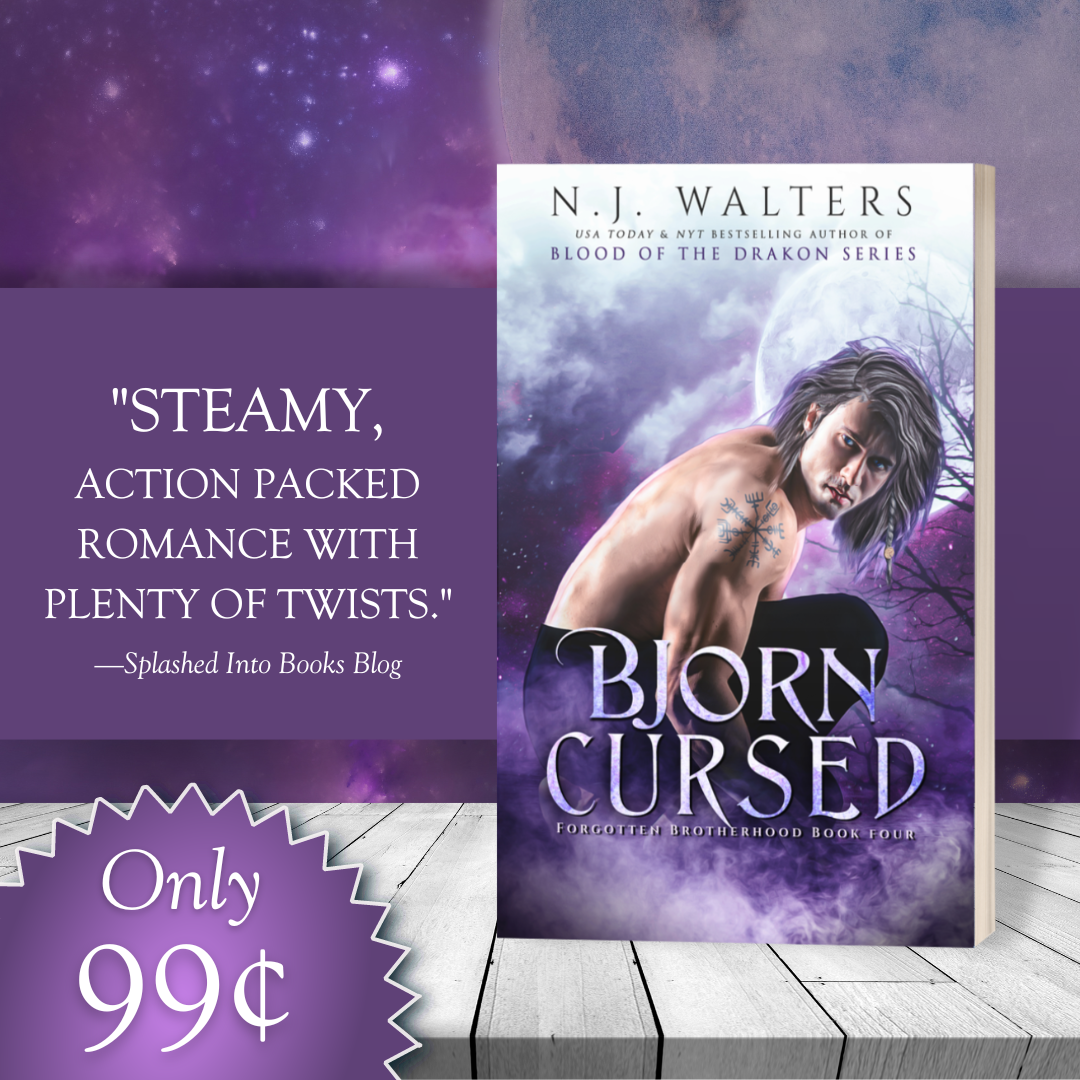 After the slaughter of his wife and family centuries ago, tortured and broken Bjorn was cursed as the first Norse werewolf. With the help of the Forgotten Brotherhood, Bjorn has finally been able to control the beast within. But Lucifer is still looking to create chaos for Forgotten Brotherhood. Only this time, he’s taken a woman from the Norse afterlife…and placed her right in the path of Bjorn Knutson.

Now Odin himself has tasked Bjorn with killing the woman who escaped. Failure is not an option. But when he rescues a human woman in the night, Bjorn is stunned to find himself looking on upon the face of the woman who’s haunted his dreams and nightmares for centuries. His long-dead wife. His love. His Anja. And she is the one pulled from the afterlife—and he’s been sent to kill.

Killing her will destroy him. And letting her go will unleash the fury of Odin upon them both…

Each book in the Forgotten Brotherhood series is STANDALONE:

Once upon a time N.J. had the idea that she would like to quit her job at the bookstore, sell everything she owned, leave her hometown, and write romance novels in a place where no one knew her. And she did. Two years later, she went back to the bookstore and her hometown and settled in for another seven years. One day she gave notice at her job on a Friday morning. On Sunday afternoon, she received a tentative acceptance for her first erotic romance novel and life would never be the same. N.J. has always been a voracious reader, and now she spends her days writing novels of her own. Vampires, werewolves, dragons, time-travelers, seductive handymen, and next-door neighbors with smoldering good looks—all vie for her attention. It’s a tough life, but someone’s got to live it.