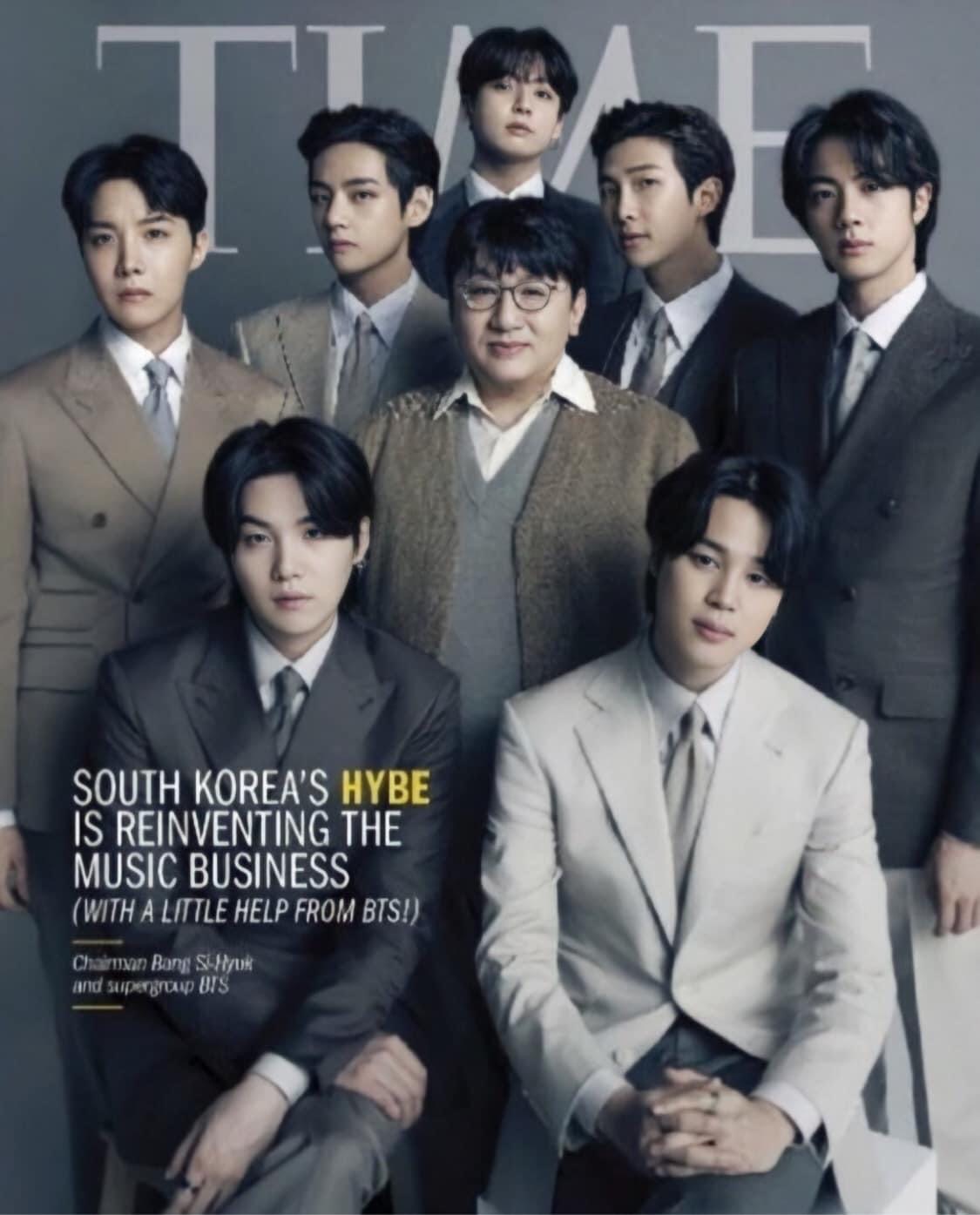 In my last post I talked about how I became a part of the BTS ARMY fandom, but today I wanted to focus on BTS themselves and why I feel they deserve all the hype they get. The group is more than just seven guys who sing and dance. Together, they are a world-wide phenomena that has spread K-pop beyond the borders of South Korea, introduced Korean culture to millions who would have never known about it otherwise, acted as ambassadors and spokespeople for many important causes, and much, much more. It is impossible to cover everything BTS has done in one post, so I’ve included some highlights below and forgive me for all the achievements I could not include.

Did you see my bag?

Iconic lines from their smash hit, Mic Drop, are:

And truer words have never been said. 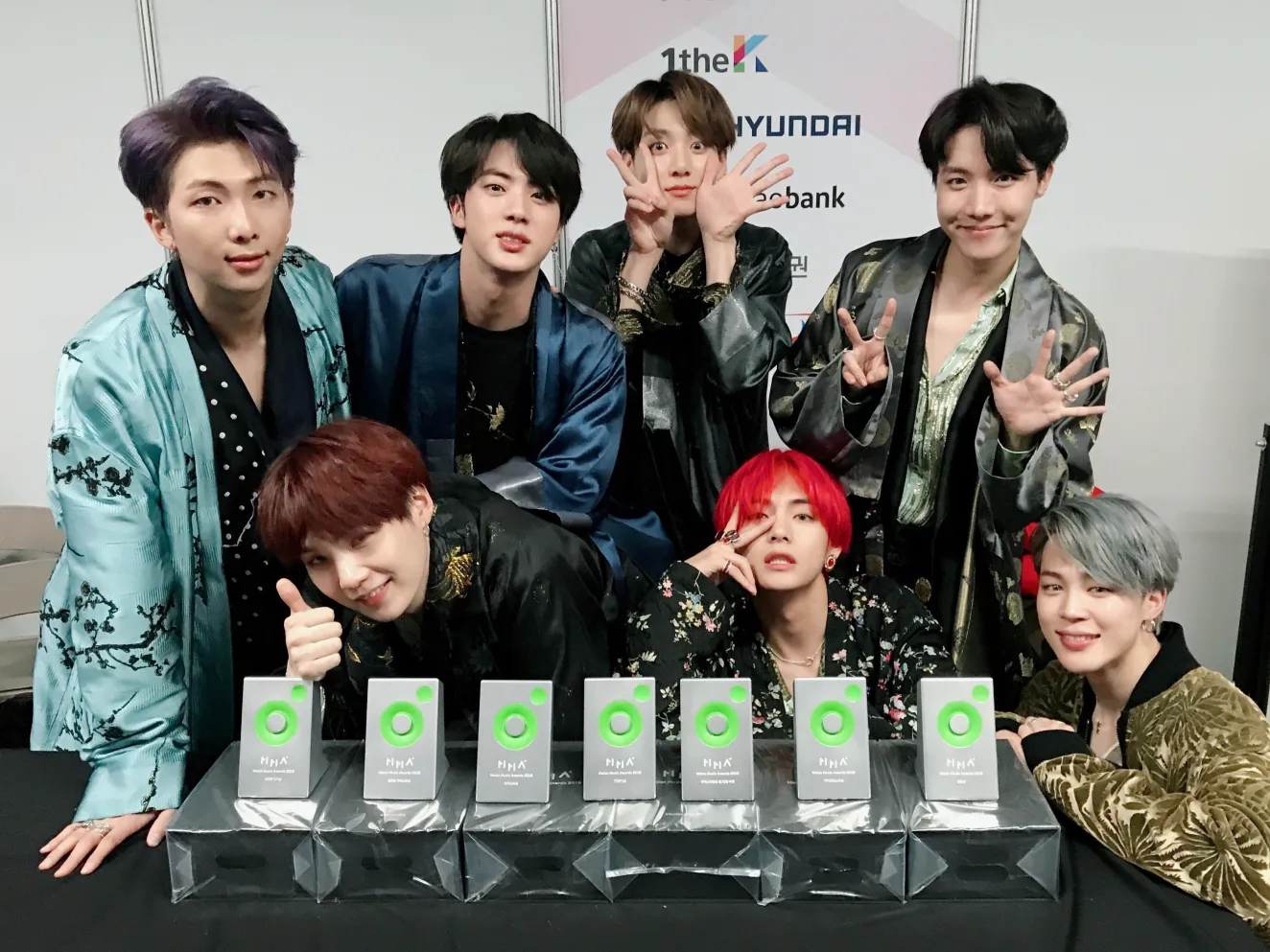 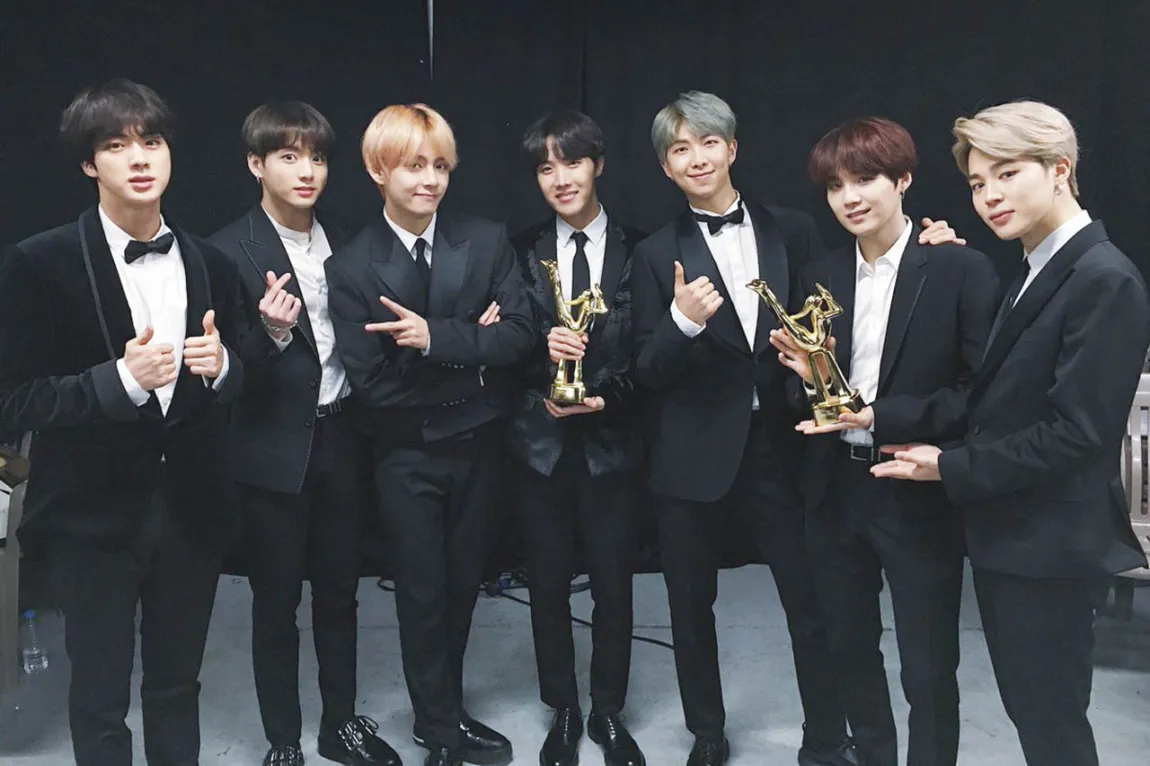 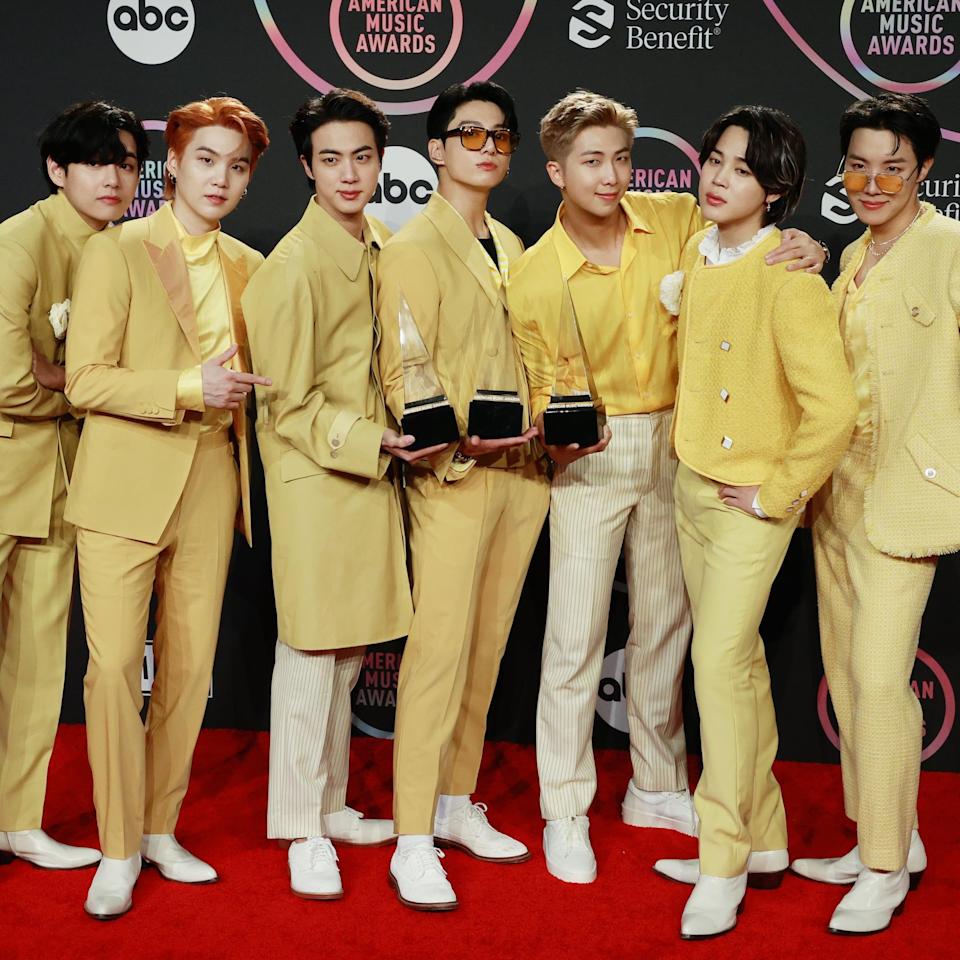 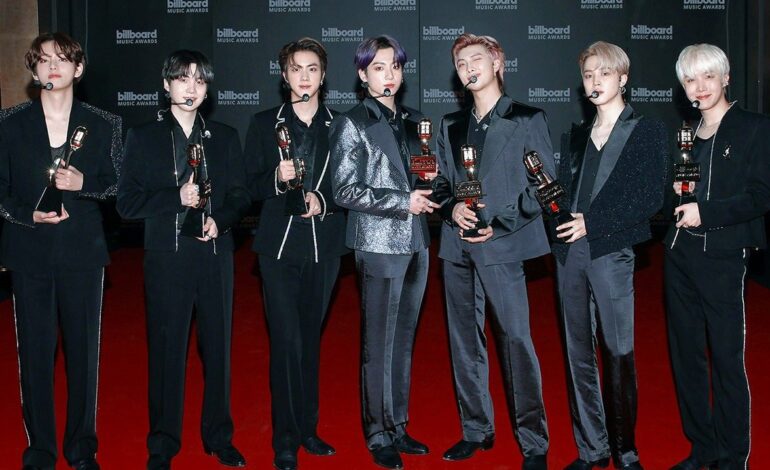 And these are just a few of the awards they have won!

At the Hybe Insight Museum in South Korea, guests can view some of BTS’s awards in the 8.5 meter tall Trophy Wall. 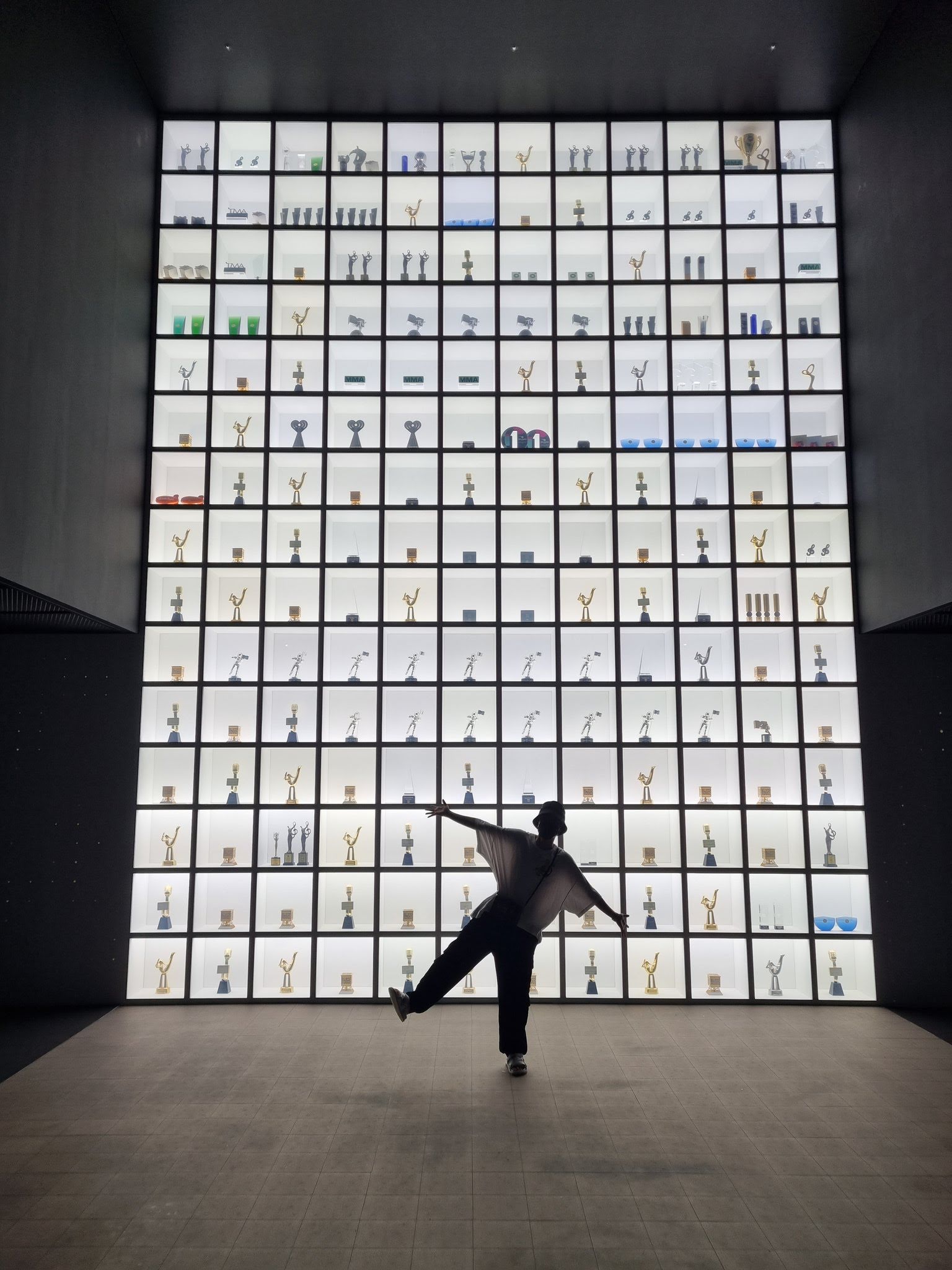 Did someone say world wide ambassadors?

In 2018, BTS addressed the UN General Assembly to help launch the Generation Unlimited initiative, a global partnership to ensure every young person is engaged in school, training or employment opportunities by 2030. In his inspirational speech, BTS’s leader RM talked about the Love Myself campaign that they partnered with UNICEF to create, how it changed lives around the world, and how learning to love himself had changed his own life.

Hearing him speak about his personal struggles, both in the past and on-going today, truly touched my heart and made me feel like I wasn’t alone in the struggles I faced. RM said, “Maybe I made a mistake yesterday, but yesterday’s me is still me. I am who I am today, with all my faults. Tomorrow I might be a tiny bit wiser, and that’s me, too. These faults and mistakes are what I am, making up the brightest stars in the constellation of my life. I have come to love myself for who I was, who I am, and who I hope to become.”

He closed with the following remarks,

So, let’s all take one more step. We have learned to love ourselves, so now I urge you to ‘speak yourself.’

I would like to ask all of you. What is your name? What excites you and makes your heart beat?

Find your name, find your voice by speaking yourself.

I’m a hip-hop idol and an artist from a small town in Korea.

Like most people, I made many mistakes in my life.

I have many faults and I have many fears, but I am going to embrace myself as hard as I can, and I’m starting to love myself, little by little.

What is your name? Speak Yourself!

You can read his full address on the UNICEF website or watch the video below.

BTS returned to the UN in 2021 with then Korean President, Moon Jae-In, to address the UNGA about the challenges today’s youth face from the effects of the pandemic, poverty, and combating climate change. 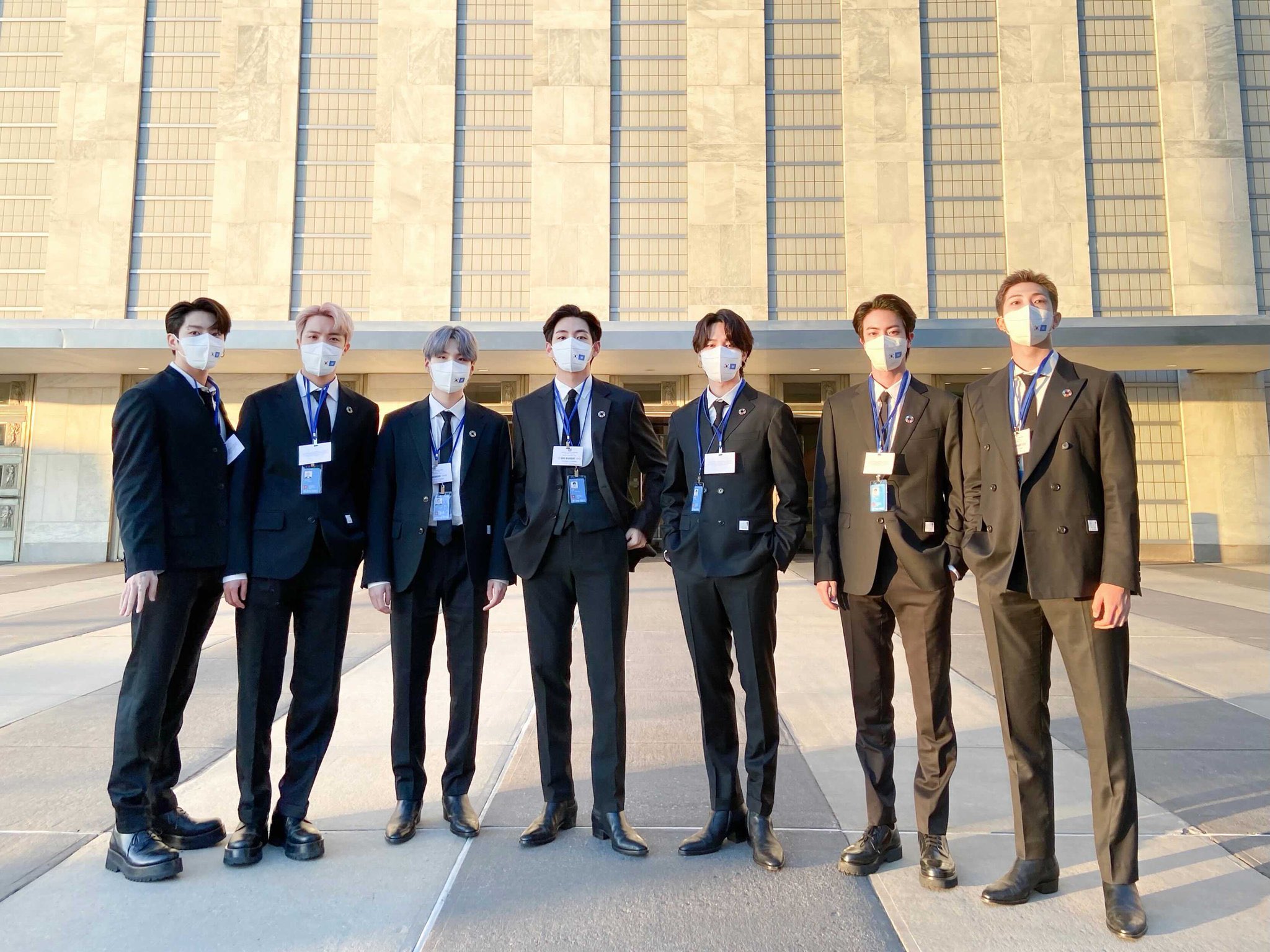 Each member is a talent in their own right…

As if their achievements as a group were not impressive enough, each individual member is truly remarkable not only in their individual skills but the wide range of personalities they all have and how they come together as one cohesive team.

Personal achievements
-Songwriter and composer of 187 songs
-Released two solo mixtapes, the self-titled RM and Mono
-Mono reached No. 1 on iTunes in 100 countries, becoming the first album by an Asian act to do so
–Mono made a big splash on the Billboard charts, debuting at No. 2 on the World Albums chart and No. 26 on the Billboard 200
-Has a genius-level intellect with an IQ of 148

Fun Facts
-He’s earned the nickname God of Destruction because of his knack for breaking things.

–He loves visiting museums. If there’s a museum in town, safe to say he’s visited it.
-He loves to read and has inspired many readers to partake in Namjoon/RM Reading challenges and book clubs based on the books he has recommended or mentioned reading.
–He learned to speak English from watching episodes of Friends.

Solo Must Listen to Songs:
Seoul

Personal achievements
-His first  solo songs Tonight surpassed a million streams in the first 30 minutes of release
-His second solo release, Abyss, was a result of his struggles with his success, musing that “there are many people who love music more and are better than me.”
–He collaborated with V on the original soundtrack (OST), It’s Definitely You, for the Korean historical drama Hwarang
-His 2022 OST, Yours, from the Korean drama Jirisan, was the fastest Korean solo OST to hit 35 million streams on Spotify and it is currently the longest charting Korean song in the Top 10 of Billboard’s Hot Trending Songs

Fun Facts
-Jin originally wanted to be an actor but was scouted as an idol for his stunning visuals, earning him the nickname “Worldwide Handsome.”
-He is often called the “mom” of the group and having a huge part in “raising” Jungkook who was just 15 years old when he joined BTS
-Jin was the member who would drive Jungkook to school when Jungkook was still a minor and along with other members also attended Jungkook’s junior high graduation 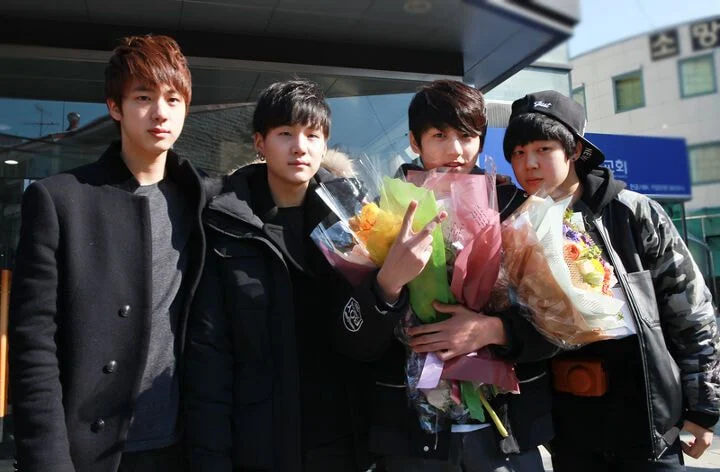 -He loves fishing and even released a song called Super Tuna (you can watch the fun video here)
-With his playful attitude and joyous energy, he is usually mistaken for the youngest!
-He’s the king of dad jokes and has inspired an uncountable number of memes

Personal achievements
-Songwriter and composer for over 130 songs
-He’s an award winning producer who’s worked with artists like Psy, Suran, Halsey, and ØMI to name just a few
-He’s been featured in songs by artists around the world like Juice Wrld, IU, Max, and Halsey
-He has released two solo mixtapes under the name Agust D and his solo release, Daechwita has nearly 191 million streams on Spotify
-Suga is an outspoken advocate for mental health and has openly discussed his own battle with anxiety and depression 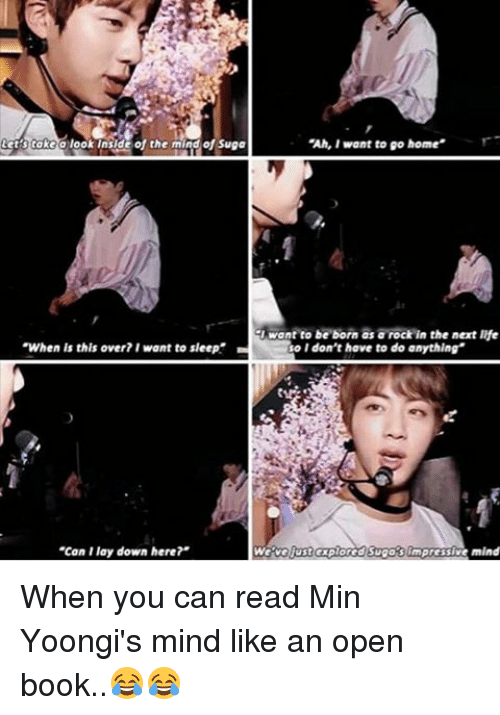 -Suga jokingly called out Bang PD for “lying” to him about not needing to dance when he first joined BTS (see the clip)
-He earned the nickname lil meow meow because of his cuteness and because he shares so many characteristics with cats. There’s also the running joke that there’s a cat picture for every Suga pose 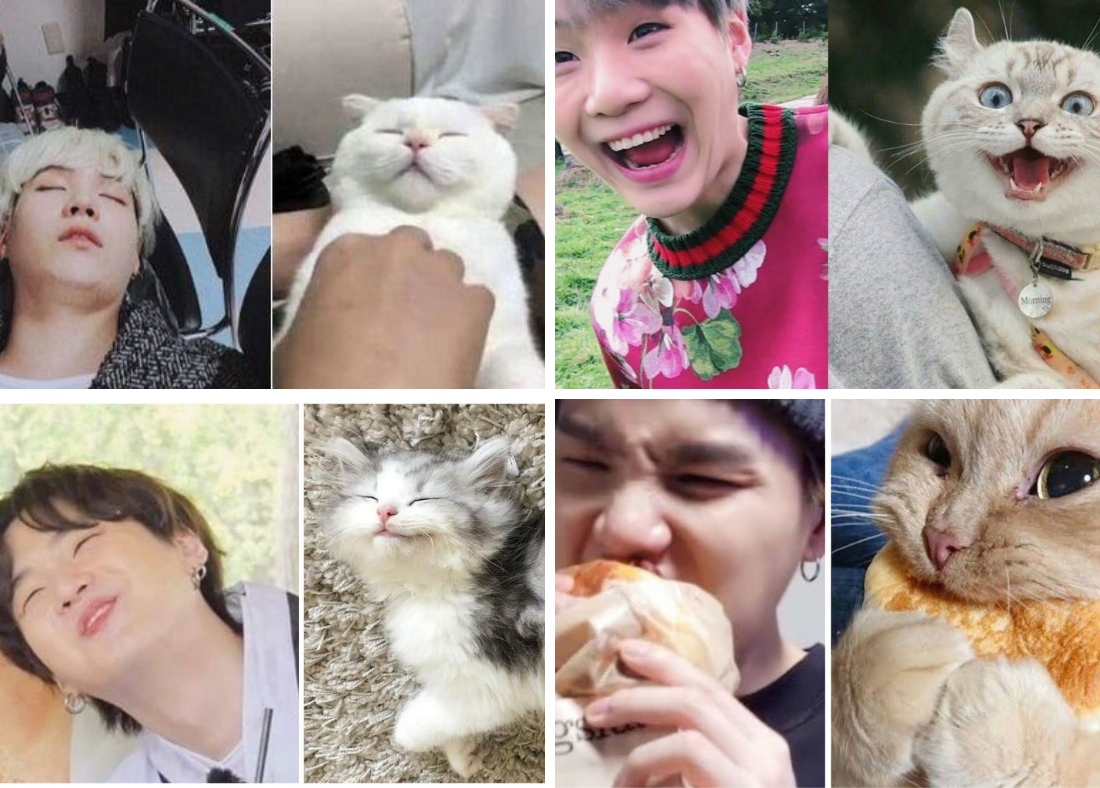 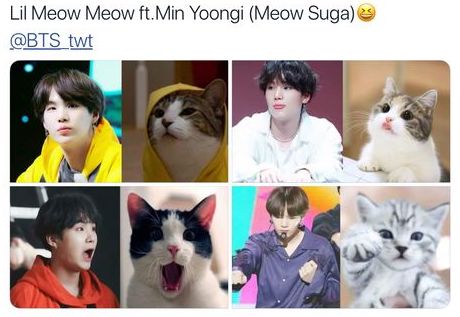 Daechwita features a lot of Korean culture and has many hidden meanings within the lyrics.

Personal achievements
-He’s credited as a songwriter and composer of over 100 songs
-J-Hope has also released a solo mixtape, Hope World
-With his release of his solo song, Chicken Noodle Soup, he was the first BTS member to chart on the Hot 100 list as a solo artist and currently has over 139 million streams on Spotify
-He was a guest mentor on MBC’s Under Nineteen show to help teach the trainees BTS’s “Fake Love” dance choreography.

Fun Facts
-Prior to joining BTS he was a part of an underground dance team called Neuron
-He’s sometimes called the second leader of the group and both his work ethic and upbeat attitude has been credited with helping the group come as far as they have
-While he is technically a part of the hyung line (Jin, Suga, RM, and J-Hope) he is sometimes referred to as the king of the maknae line (Jimin, V, and Jungkook) because of his energy with the younger 3 members 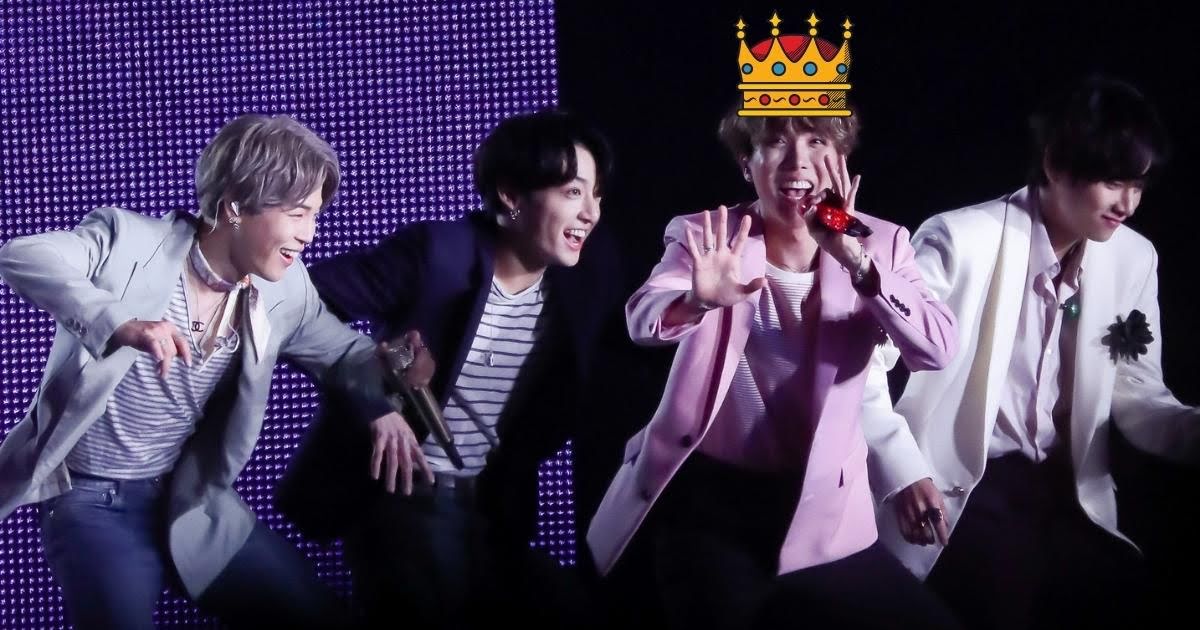 Personal achievements
-Jimin has released solo songs solo songs outside of his BTS work including Promise which has over 315 million streams on SoundCloud and Christmas Love which has over 59 million streams on SoundCloud
-His latest release, With You, from the Korean drama Our Blues, debuted as the #1 song on Billboard’s Hot Trending Songs list
-Jimin and V’s song collaboration, Friends, was featured in the Marvel movie The Eternals

Personal achievements
-He made his acting debut in 2016 in the Korean historical drama, Hwarang
-In 2018 The Guardian added his solo song “Singularity” to its “Top 50 songs for the month of June 2018” playlist, and Billboard put it at number 28 on its Critics’ list of the “Top 50 BTS tracks
-V and Jin collaborated on It’s Definitely You for the Hwarang original soundtrack
-He has also has sung original soundtracks for the dramas Our Beloved Summer, Christmas Tree, and Sweet Night from the drama Itaewon Class
-V wrote, produced and sang Sweet Night which debuted at No. 2 on Billboard’s Digital Song Sales chart—an all-time high for a Korean solo artist and it has over 227 million streams on Spotify
-Outside of his OST releases he has also released solo songs outside of BTS including Scenery and Winter Bear

Fun Facts
-V has made the Candler’s Most Handsome Faces list for 6 years
-He’s learning to play the trumpet
-He loves jazz music and on their last concert visit to Las Vegas he shared a visit to one of its jazz clubs on his Instagram account.
-V started off as the “hidden member” of BTS.
-He is the proud doggy daddy to Yeontan 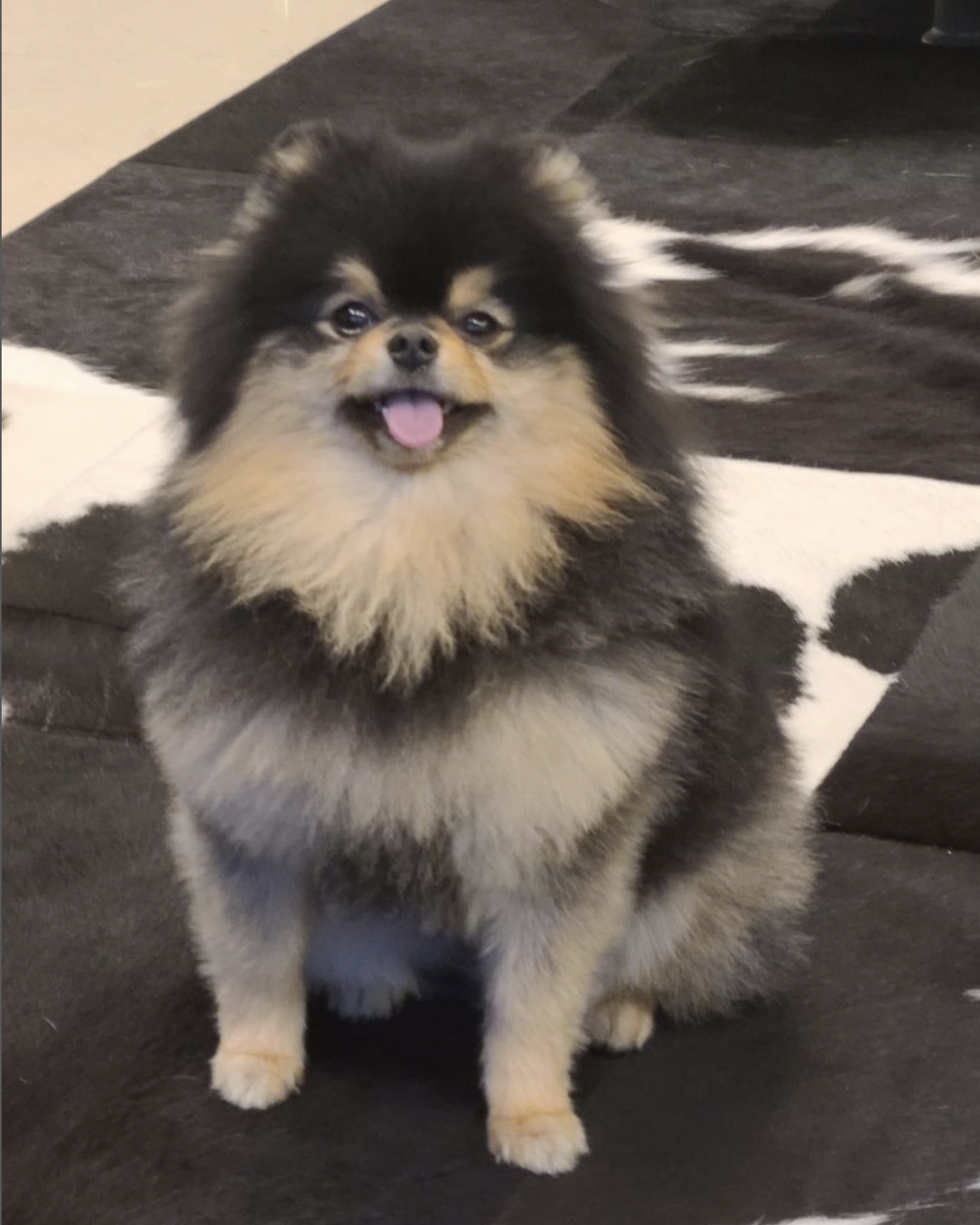 Personal achievements
-His first official solo release, Stay Alive, for the original soundtrack of the Webtoon 7 Fates: Chakho and currently has nearly 106 million streams on Spotify
-He is the youngest person to receive Korea’s Order of Cultural Merit award
-People Magazine choose Jungkook as the Sexiest International Man in 2020

Fun Facts
-He has become famous for being the “Sold Out King” when he has inadvertently caused dozens of products to sell out after mentioning them in his Vlives, online, or elsewhere
-He’s self-produced songs including Still With You, Euphoria, My Time, and Film Out
Jungkook also composed the song, Your Eyes Tell, which broke multiple streaming records across the world
-He’s the proud doggy daddy to 3 dogs (that we know of), Bam, Song, and Paeng 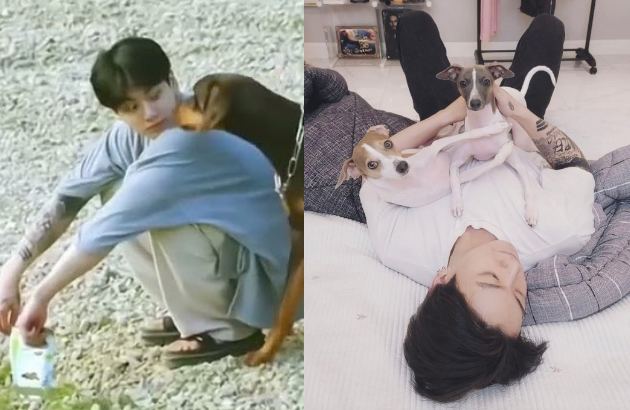 -He’s know as the Golden Maknae because he literally seems to be good at everything he does. The short summary:

And the extended version:

Solo Must Listen to Song:

Whew! Like I mentioned at the start, this was just a highlight of the group’s many talents. The one thing I haven’t covered yet is their amazing fan base, better known as ARMY. That’s to come in the next post. Until then, I leave you with another of my favorite songs.

Fandoms - How I Became a part of BTS’s ARMY

May: What Books Are On My Nightstand...

Happy Fourth of July! While barbecues, concerts, and fireworks are all the rage, we’re going to cele…