Playlist for Reunited in Danger

Songs make me so emotional! They also help me experience what someone else might be feeling. Is it that way for you, too? For me, as the idea for a story percolates and unfolds, I add songs to my playlist that remind me of my characters. For Reunited in Danger, I tried to think of songs that Logan and Keely would listen to. Or, music that expressed the intense emotions they were going through. I often listen to their music as I wash dishes or commute to work. It helps me feel a connection to them that puts me right there with them.

As Keely and Logan fight their battle to overcome their past and figure out their future, here are the songs I relied on to help me feel what they feel.

Keely and Logan have a complicated past. But after a long day, it turns into a late night. Just the two of them. Why Don’t You Spend the Night has the perfect “casualness” to it that fits Keely and Logan as a couple. It’s sort of like “Hey, we’re both here. It’s late. Might as well just stay here all night.” In reality, it’s not that casual and relationships are always complicated as the song implies.

Great, emotional intro! It’s a deep, hard knocks, screaming song. Logan admits to himself that he is not the person he wants to be without Keely. Of course, Logan is a police officer, so death is almost always on his mind—his or others.

Wow. What woman wouldn’t want a man singing this song about her? The words “wash the hurt away” are what really made me feel what Logan would be feeling about Keely. He wants her…all of her, but he wants her pain gone, too. The pain of her current situation, her past, and the children she tries to protect as a social worker.

So many reasons why this couple should be together! Logan knows he has flaws and isn’t perfect. Keely is the reason he has the strength to be vulnerable enough. To find “a reason to start over new.”

Keely and Logan know that lives are hanging on each moment of their investigation. Only facts, leads, and their guts can point them toward an evil that is lurking in Baltimore. Each moment together also builds a trust and brings them closer to one another.

Happy listening and happy reading as so many wonderful Entangled suspense books are a great price this week! 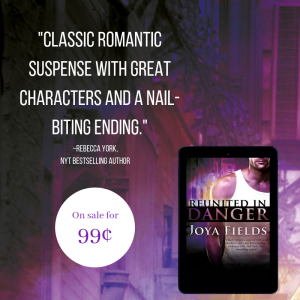 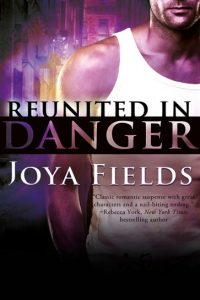 Keely Allen’s life goes into a tailspin when her adoptive father is viciously attacked. And the detective who offers to help her? None other than the sexy, love ’em and leave ’em man who once broke her heart.

Homicide Detective Logan North carries a haunting secret that has always kept his emotions on lockdown. But when he is forced to work alongside his former lover, the heat is still there between them, burning hotter than ever. Logan is determined to keep the luscious and tempting Keely at a distance…but he made a vow not to leave until all are safe.

They’re in a race to solve the tangled web of crime, and their lives have never been in more danger. 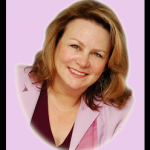 Joya Fields has had over 100 stories and articles published in local and national magazines. Her debut novel, a romantic suspense, was a NJRW GOLDEN LEAF WINNER FOR BEST FIRST BOOK OF 2012 and was nominated for RT Book Reviews 2012 Indie Press/Self-Published Contemporary Romance award. She’s since released five more books. Over the years, Joya has taught arts and crafts, worked in public relations, owned a daycare center, helped her children raise prize-winning 4-H livestock, competed in three marathons, and even spent a year as a Baltimore Colts cheerleader. Joya loves spending time with her high school sweetheart/husband of over twenty-five years, two very supportive children, and two pugs who follow her everywhere. www.joyafields.com

Posted in: Author Interview, Authors Speak Out, Behind the BookTagged: Joya Fields
Previous