Behind the Book: Mischief and Mayhem by L.E. Rico

I’m sure you’ve heard that old adage: “Write about what you know about.” And that’s exactly what I did when I set my Whiskey Sisters series in the fictional town of Mayhem, Minnesota. Now, I’m a New Yorker by birth but I spent nearly eight years living in St. Paul. To say that it was a culture shock is huge understatement. But I was embraced by the locals and, in turn, came to embrace some of their customs such as hotdish, the polka mass, ice sculptures and the Minnesota State Fair. That last one was, by far, the most fun to explore—especially as a girl from Long Island who was used to small fireman’s fairs and block parties. Here are just a few of the wonders of the Minnesota State Fair—which I re-christened as the Magawa County Fair—and captured in my latest book, Mischief and Mayhem…

What?! Isn’t that a corndog? No, most definitely not! Discerning fairgoers will note that, while the corndog uses a cornmeal based—batter, the pronto pup is dipped in a mixture of —yes, cornmeal—but also wheat and rice flours. It’s a little less grainy and sweet. 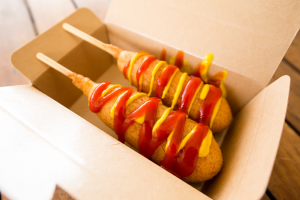 Well, yeah! They’re mostly too scary for me, but I appreciate a good swing ride from time to time. Learn from my mistakes here: save the Pronto Pup for AFTER the rides! 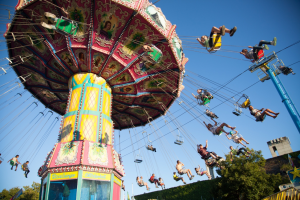 Princess Kay of the Milky Way

Each August, on the eve of the fair opening, one young woman is crowned Princess Kay of the Milky Way. She has duties during the run of the fair as well as throughout the year. But the coolest thing about her (I think) is that she gets a butter sculpture made in her image! The contest for Princess Kay is made possible through Midwest Dairy. I totally ran with this idea in Mischief and Mayhem, selecting FOUR princesses including Princess Mary of Midwestern Dairy, Princess Drew of Midwestern Brew, Princess Di of Midwestern Pie and Princess Reed of Midwestern Feed. If you read nothing else, you MUST read the part where Princess Drew gets a hilarious smackdown from one of the Whiskey Sisters during the big parade! 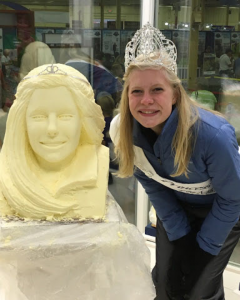 OMG! Who knew a pig could be so cute?!?! When it comes to primo livestock, the farmers of Minnesota are all worth their weight in blue ribbons! 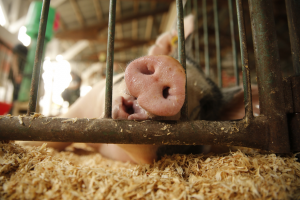 And my final pick for the best of the Minnesota State Fair is something that I totally could not wrap my head around as a new Minnesotan…the cheese curd! It just sounded so… ewww… curd?! No good can come out of anything with curd in the name. That’s what I thought until I tasted this gnarled little version of a cheese stick. Think topnotch Midwestern cheese, battered, deep fried and served up in a heaping basket of hot, cheesy yumminess. Ohhhhhh yeah, baby.

Just don’t forget what I said about the rides… BEFORE THE CURDS!! 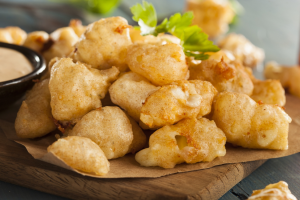 Be sure to check out the wonders of the fair and wacky, fun, loveable residents of Mayhem, Minnesota. They’ll keep you laughing and crying—intermittently—and falling in love—constantly.

Check out Mischief and Mayhem by L.E. Rico! 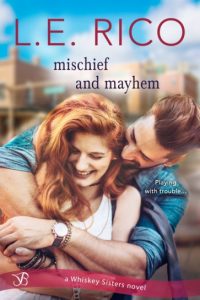 Welcome to Mayhem, Minnesota, home of the Knitty Kitty, The Little Slice of Heaven Pie Shop, and O’Halloran’s Pub—owned by the four young women known as The Whiskey Sisters.

In the wake of her divorce, Jameson O’Halloran has gone man-vegan. And this is one diet she’s determined to stick with. Even when her long-lost ex-brother-in-law shows up looking like two scoops of double dutch dipped in chocolate… She’s not giving in. Been there and still wearing the messy T-shirt.

It’s been a decade since Scott Clarke left his family and his hometown, never to return. But when tragedy strikes, he finds himself dragged back to the land of gossip, judgment, and the one woman he absolutely, positively, without a doubt can never have. His brother’s ex is off-limits. He just needs to keep repeating that to himself until it sinks in. 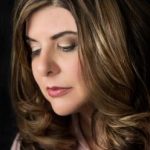 L. E. Rico was going to be principal French horn of the New York Philharmonic. That was her plan, anyway. The New York Philharmonic had no idea of her intentions, and that’s probably a good thing, since she wasn’t an especially good French horn player! Lauren was, however, an exceptionally good classical music radio host. She has made a career of demystifying classical music for her audiences by taking it off a dusty old pedestal and putting it into a modern context. Lauren has recently discovered a passion for writing, which she’s managed to combine with her love and knowledge of the classical music world. She also writes new adult under Lauren E. Rico.

Posted in: Author Interview, Authors Speak Out, Behind the BookTagged: L.E. Rico
Previous

We’re so excited for our new release, Love at Stake as it deals with something near and…

If the word beer makes you think of lukewarm Bud Light, you owe it to yourself to broaden your horiz…