In honor of my novel, ROYAL ATTRACTION, going on sale for .99 (much, much, much less than any real royal wedding), I am sharing some of my favorite cinematic royal couples!

Even though not technically a royal couple, I LIVED for Wesley and Buttercup in Princess Bride growing up. My advice to any girl -Find you a man who will not only fight a ROUS but will also roll down a hill after you screaming: “As you wish.”

It’s always enjoyable to see royals act less than royal. Besides, I’m a sucker for the enemies to lovers trope, and they really pulled it off in Princess Diaries 2.

We’ve all loved the wrong boy…even Queen Elizabeth I.

A prince that takes you on a “date” to go read? Yeah, I’m down. I can even forgive Barrymore’s terrible accent in Ever After!

The Other Boleyn Girl…or that time your love story redefined a country’s politics. 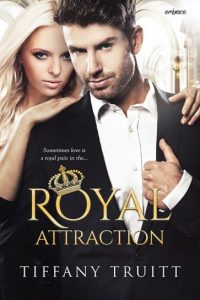 Tiffany Truitt received her MA in literature from Old Dominion University. Her debut, Chosen Ones, first in the Lost Souls trilogy, is a searing look at what it means to be other and how we define humanity, as well as a celebration of the dangerously wonderful feeling of falling in love. www.tiffanytruitt.wordpress.com

Happy holidays! All month long meet some of our authors and their best selling books. Robin Bielman …

Hey everyone! We are totally stoked to announce the hosts and schedule for Sara Hantz’s IN THE…