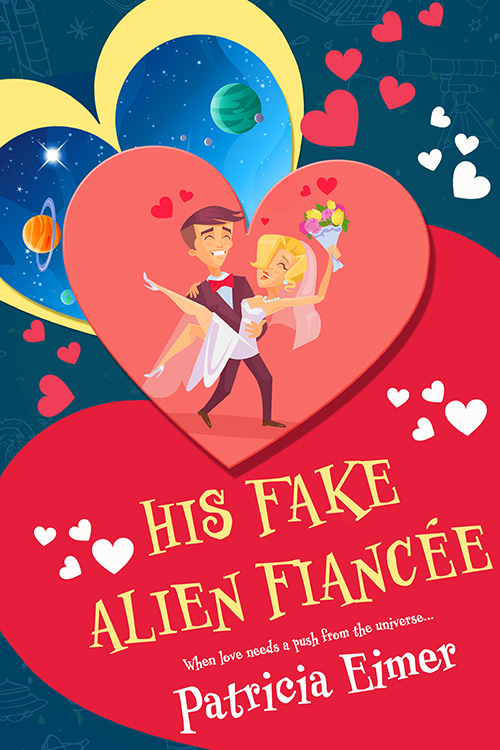 When love needs a push from the universe.

Take a peek inside His Fake Alien Fiancée by Patricia Eimer! A laugh-out-loud, sci-fi romantic comedy!

I’ll be alone and he’ll know that I lied to him. And when he leaves, he’ll make me go with him. And before I know it I’ll be married to some nine-hundred-year-old alien, and I won’t even be his primary wife. I’ll be third. Third wife. My children won’t inherit. In fact, his first wife’s children might kill them to prevent them from making a challenge to the throne. And when he dies I’ll be cast out. Sent home. Then my father will just make another alliance.”

“No, you won’t.” Brandt’s fingers tightened around her own. “You’re staying here.”

“How?” She raised one of her own eyebrows at him in what she thought was a human look of skepticism. “The only person I know in town that won’t freak out when they see my father in his natural form is you and—”

“And I’m going to be right there beside you,” Brandt interrupted. “Holding your hand. Telling your father that I intend to marry you.”

“What?” She gaped at him, unsure what to say. Brandt wanted to marry her? To have loud human intercourse like Corri and Mattias did? To sleep in the same bed? Argue over which show to watch on Netflix? He wanted to be the one to introduce her to new foods like popcorn and pizza and all the things Corri ate at Mattias’s apartment when they were having dates? To have loud, wall-banging, moaning, goingto- be-late-to-work sexual interactions with each morning?

Her heart began to pound as she wondered just how nice it might be to see Brandt without his clothing on. Her sister said human males weren’t nearly as deformed-looking in person as they appeared on video screens and in anatomy textbooks. That they were actually sort of attractive. And that human sexual intercourse was messy, but it was also very enjoyable. She didn’t even seem to mind the whole “putting their tongues in each other’s mouths” thing.

If she was going to do anything like that with anyone it would definitely be with Brandt. It wasn’t like there were any other humans she could trust. But she’d thought they might work up to it a bit more first. Maybe dinner? She thought they should at least have lunch somewhere besides Flo’s Diner first.

“I’m not proposing.” Brandt tightened his grip on her fingers. “Not for real. But look at it this way. You need a fiancé who knows you’re an alien and is okay with it. And you need that guy in four days. Considering your lack of options? I’m your guy.”

“What’s in it for me?” He shrugged. “I get to make sure that my favorite alien doesn’t find herself married to some old guy.”

“That doesn’t have anything to do with you, though.”

“Look.” He let go of her hand and brought it up to hold her chin gently so they were forced to make eye contact. “I know you’ve been doing all this Earth Studies stuff and watching videos and all that and you think you understand us. And maybe you do. But here’s what you don’t seem to get—some of us were raised to believe you never leave a man behind. And while you’re not a man—heck, you’re not even human—you are my friend, and I am not letting anyone take you somewhere you don’t want to go. If that means I have to pretend to be your fiancé while your dad is here, well then, break out the bridal magazines, sweetheart, because until your dad is out of our orbit we’re planning for the day we hear wedding bells.”

“Oh.” She stared at him, unsure what to say.

“I guess, what I’m saying”—Brandt let go of her chin and grabbed her hand, bringing it up to his mouth—“Will you, Princess Perripraxis blada blada, I’m not sure of all your titles so I’m just going to call you Princess Perri, will you do me the very great honor of being my fake fiancée for the length of your father’s visit to our humble planet so that he doesn’t decide to invade us or whatever it is he might do if he gets pissed off?”

About His Fake Alien Fiancée:

Princess Perripraxis not only has to find a fiancé—and fast—she’s got to find one who doesn’t mind that her “no makeup” face has green and purple scales. Otherwise, Daddy Dearest has plans that don’t include Perri’s compliance. Candidate Number One: Her sexy human best friend, Brandt.

Bartender Brandt Turner didn’t need all those years in the army to teach him never to leave a man behind. Or an alien princess in need of a pretend fiancé. If she needs someone to play the lovesick fool to convince her dad to let her stay on Earth, well then, he’ll let the world think Cupid finally took him out.

But Perri’s father has no intention of playing nice—and he’s not above cruel and unusual alien torture to make things go his way. But Brandt is willing to complete the mission…however far he has to go.

Patricia Eimer is a suburban mom who has days where she feels like she’s barely hanging on. She currently lives in eastern Pennsylvania with her two wonderful kids and a husband that learned the gourmet art of frozen pizzas to give her more time to write. When she’s not writing—or shuttling her children to a hundred different places a day– she can be found trying to cook (and sometimes blowing up hard boiled eggs), reading and arguing with her dogs about plot points. Most days the Beagle wins but the Dalmatian is in close second and her mastiff puppy is making a break for the inside. Patricia meanwhile is a longshot fourth. When she’s not writing she can be found on Facebook, at her website (www.patriciaeimer.com) or on Twitter (@PatriciaEimer) . She is also a connoseiur of really bad science jokes.

Behind the Book: The Stubborn Billionaire by Lexxie Couper

An ex-ballerina whose been burned by play boys one too many times, a soldier whose known for being a…

With the launch of Entangled’s new Lovestruck imprint comes my newest book, MEETING HIS MATCH…