While I was deep in the final copy edits of my latest YA novel LIES THAT BIND, the Philadelphia Eagles went to the Super Bowl. Most of you probably read that and think, big deal? Is your book about football or something? No, it’s not. It’s a YA spy thriller, the sequel to PROOF OF LIES. But it’s significant because I live in Center City Philadelphia, and I was raised in a family of diehard Philly sport fans.

As you may know, Philly isn’t known for its championships—at least not in my lifetime. There were a couple of titles when I was a toddler, then a complete drought (or curse, if you believe the rumors regarding William Penn’s hat, http://www.philly.com/philly/business/comcast/comcast-ironworkers-billy-penn-eagles-nfl-new-tower-20171130.html) until the Phillies won the World Series in 2008. The Eagles had never won.

I was raised on football. I was a cheerleader starting in the second grade. I can sing all the lyrics to “Buddy’s Watching You.” I play in two fantasy leagues—one all female, which I’ve won. I understand penalty calls—from horse collars to encroachment—and I actually watch the NFL Network while eating my cereal in the morning.

Philadelphia fans are passionate. Notice I said “passionate,” and not lunatics. The media has given us a bad rap. There have been decades of discussion of us throwing snowballs at Santa (literally fifty years ago), and batteries at players, and beer cans at opposing fans. But nothing compares to the parties on Broad Street during this championship run.

I was there. Both when the Eagles won the NFC Title to clinch their Super Bowl berth, and again after Tom Brady’s Hail Mary pass hit the dirt and the Eagles hoisted the Lombardi trophy.

My brother, Lou, and I rented a room in a bar on South Street to watch the game with about fifty of our friends and family, and we all walked from Broad and South to Broad and Spruce Streets following the big win.

I hate disappoint, but unlike reports on Howard Stern, no one actually broke into the zoo and road a ostrich down Broad St. No one lit anything on fire that I saw. In fact, the majority of the people in this very dense crowd (think Times Square on New Year’s Eve to ring in the year 2000) were simply deliriously happy. Cops were everywhere—high fiving fans as they past—and the city was publicly happy with how few “knuckleheads” there really were (both after the Super Bowl and during the parade).

Below are some photos to prove I’ve #DoneIt. So the next time you hear wild complaints of Philly sports fans, either roll your eyes like we do, or simply remember we’re wearing T-shirts quoting Jason Kelce, “We’re from Philly, f*’n Philly, no one likes us, we don’t care!”

So here’s a photo of me with one of my best friends from childhood, Melanie, who drove nine hours straight from Cincinnati, OH to be in Philly for the game. And yes, my sister-in-law handmade that sign, which was a huge hit with strangers on Broad St. later in the night. 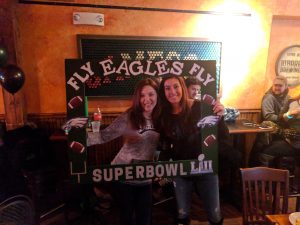 This is my husband, Jordan, and me on Broad Street immediately after the win. And yes, he grew a beard during the playoffs (too superstitious to shave it) and dyed it green. It’s gone now. 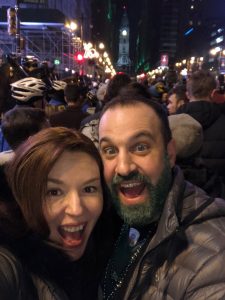 Philadelphia citizens brought their own fireworks and lit them near City Hall. 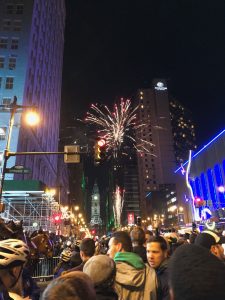 To prove I’m not exaggerating how not-dangerous the scene was, my 72-year-old father walked down Broad Street with us. Here he is with me, my husband, Melanie, my brother, my sister-in-law, and their kids. 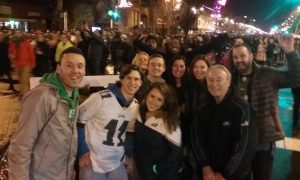 The parade was as family friendly as any I’ve ever been to, assuming your parades allow open containers of beer. Here’s the whole family waiting for the team to pass near the Art Museum steps. Along with a photo of me, my husband, and my dad. 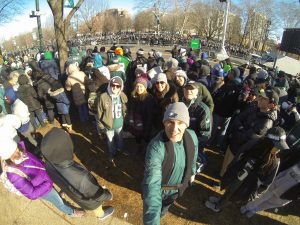 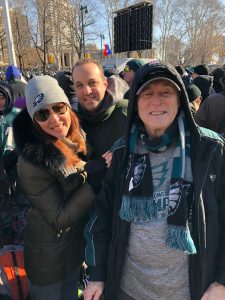 I’m throwing in a picture of the World Champion Philadelphia Eagles, just to prove these crowd shots weren’t at a Thanksgiving parade or something. 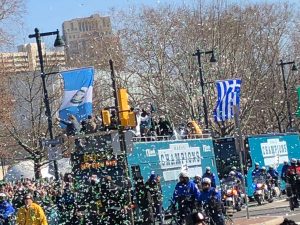 And to emphasize exactly how long this city stretches between championships, here’s a photo of my brother Lou, my sister-in-law Nicole, me and their kids celebrating the Phillies World Series win on Broad Street in 2008. 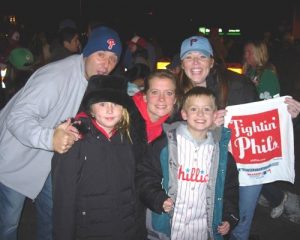 Here’s us reenacting the same photo for the Eagles in 2018. Odd, because the kids have grown so much, but the adults look exactly the same. 😉 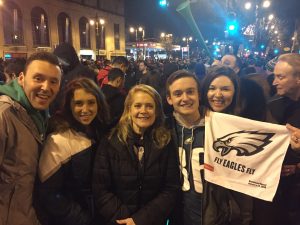 If you’ve read this far and need further proof that the majority of Philadelphians partying on Broad Street weren’t nearly as rowdy as the national media would like you to believe (Fake News!), here’s a video of us walking down Broad Street immediately after the win near the intersection with South Street. Look at how calm and happy everyone is! Trust me, it was amazing! I’m so glad I got to do it in my lifetime!

Pick up Proof of Lies by Diana Rodriguez Wallach for FREE! 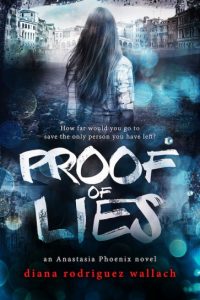 Anastasia Phoenix has always been the odd girl out, whether moving from city to international city with her scientist parents or being the black belt who speaks four languages.

And most definitely as the orphan whose sister is missing, presumed dead.
She’s the only one who believes Keira is still alive, and when new evidence surfaces, Anastasia sets out to follow the trail—and lands in the middle of a massive conspiracy. Now she isn’t sure who she can trust. At her side is Marcus, the bad boy with a sexy accent who’s as secretive as she is. He may have followed her to Rome to help, but something about him seems too good to be true.

Nothing is as it appears, and when everything she’s ever known is revealed to be a lie, Anastasia has to believe in one impossibility.

She will find her sister. 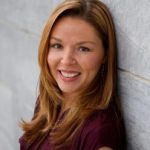 Diana Rodriguez Wallach is the author of the Anastasia Phoenix series, three YA spy thrillers set to debut beginning in March 2017 (Entangled Publishing). She is also the author of three award-winning young adult novels: Amor and Summer Secrets, Amigas and School Scandals, and Adios to All The Drama (Kensington Books); as well as a YA short-story collection based on the Narcissus myth, entitled Mirror, Mirror (Buzz Books, 2013). In 2011, she published a highly regarded essay in Dear Bully: 70 Authors Tell Their Stories (HarperCollins). It was the only essay chosen from the anthology by Scholastic to be used in its classroom materials. Diana is featured in the anthology, Latina Authors and Their Muses (Twilight Times Books, 2015), and she is currently on staff as a featured blogger for Quirk Books. In 2010 Diana was named one of the Top Ten New Latino Authors to Watch by LatinoStories.com, and she placed second in the International Latino Book Awards. She is an advisory board member for the Philly Spells Writing Center, and is a Creative Writing instructor for Johns Hopkins University’s Center for Talented Youth. She holds a B.S. in Journalism from Boston University, and currently lives in Philadelphia.

Fill Your Reading Schedule With Some Love of the Irish!

We’re are thrilled to announce the launch of our new blog.  We’d love to hear your thoug…