Balancing work as an author with the raising and care of three small children is a lot like keeping a hundred spinning plates in the air in the midst of a hurricane. Here’s how a typical weekday for me goes.

1. My morning starts with checking email and social media. Then, if I don’t fall into a Twitter wormhole, I manage to squeeze in a shower and slap on some makeup before the mad dash to get my get my two older children fed, dressed, and out the door to school. Then there’s #FutureHeroine, my infant daughter who needs a bottle and a snuggle. Oh wait, I almost forgot to pump!

2. The kids are at school, and I can finally take moment to drink that coffee I left behind in the microwave after reheating it for a third time. After cleaning up the tornado of morning clutter, I sit down with my laptop to crank out some words…when Future Heroine awakes from her nap and my characters will have to wait – mid kiss – for now.

3. In the afternoon, I’m off to get my oldest from school. Which means I wait in a long pick-up line of cars. With two cranky kids. In 100+ degree heat. If I’m lucky, I get to listen to a podcast or scribble down new words. Usually, you’ll find me singing songs and making goofy faces in the name of entertainment.

4. After dinner dishes have been put away, it’s family time. Movies, dance parties, readings, we do what we can to laugh and get the wiggles out.

5. The house is quiet. The kids are tucked into their beds. The Mister is dozing on the sofa, so it’s just me, the Game of Thrones soundtrack, and my characters, who are ready to finally finish their kiss. Oh, but my night wouldn’t be complete without a glass of wine. I’d say I’ve earned that glass.

Pick up Liana’s new release, To Love a Scandalous Duke! 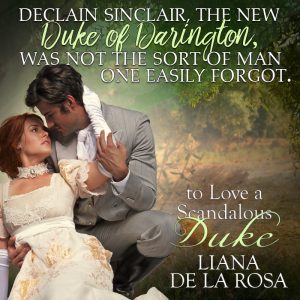 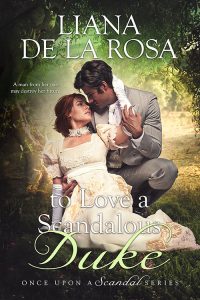 Driven into exile years earlier, due to family scandal, Declan Sinclair is called home, devastated to discover his brother has been murdered and he’s the new Duke of Darington. When clues point to the man he blames for both his exile and his brother’s death, Declan resolves to ruin the culprit. If only the daughter of the man’s business partner, lovely Lady Alethea Swinton, didn’t tempt his resolve.

Lady Alethea Swinton has cultivated her pristine reputation in the hopes of winning her father’s praise. When her childhood friend returns, Alethea finds she’s willing to court scandal and defy her father to help the handsome Declan uncover the truth behind his brother’s death. Until she realizes Declan’s redemption will mean her family’s ruin. 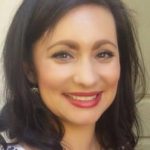 Liana De la Rosa is a historical romance writer whose stories are set in the Georgian and Late Regency periods. As a longtime fan of the romance genre, Liana can remember sneaking Harlequins into her bedroom to read on the sly. After her second child was born, her husband challenged her to write her own book and she’s been writing ever since. Liana is a proud graduate of the University of Arizona and enjoys cheering on her alma mater in all things (BEAR DOWN!). When she’s not writing witty heroes, saucy heroines, and secondary characters screaming for their own stories, she’s a wannabe domestic goddess and fashionista who wrangles a rambunctious brood of small children with her patient husband in Arizona.

CALL FOR SUBMISSIONS Forget the meek—the geek shall inherit the earth, and it’s their tu…

Priya in Heels is laced with a few dozen Indian terms, and there’s a handy glossary at the end of th…

Hey there! Since the newest book in my Night Series, Night Child, just came out in April, I thought …