Which means we like to set aside as much time as possible each day to spend with a new favorite book. So we are always looking for ways to shave off a few minutes of reality and move those minutes over to what we like to call “Quality Book Boyfriend Time.”

Some of us also can’t cook. For those of you out there that are also Kitchen Challenged, we decided to share some of our favorite, Quick-N-Easy, recipes. We hope we can help add a few minutes of reading time to your day, as well as a yummy dish.

(Click the image to head over to their Pinterest page that you really want to be following!)

Why she likes it: It’s delicious AND it’s super simple. I even made it easier by picking up some already cooked and sliced chicken from my Publix meat department. Because honestly, cutting up chicken grosses me out. I’ve also used thinly-sliced chicken tenders and cooked those up. But personally, Publix cuts it up and cooks it better than I do, so why ruin a good thing? It’s also pretty healthy and I make enough for both lunch and dinner, so BONUS!

With all that extra time not spent in the kitchen, what’s Meredith currently reading?

I’m reading Guardian of Secrets by Brenda Drake! I absolutely adored Thief of Lies and have been dying to read the sequel. It’s amazing! If you love a great YA fantasy, and you love the idea of hopping through library books, you will adore this series. 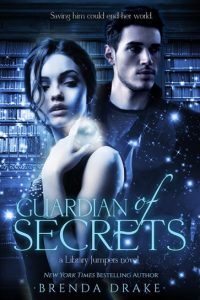 The follow-up to the New York Times bestselling novel, THIEF OF LIES!

Being a Sentinel isn’t all fairytales and secret gardens.

Sure, jumping through books into the world’s most beautiful libraries to protect humans from mystical creatures is awesome. No one knows that better than Gia Kearns, but she could do without the part where people are always trying to kill her. Oh, and the fact that Pop and her had to move away from her friends and life as she knew it.

And if that isn’t enough, her boyfriend, Arik, is acting strangely. Like, maybe she should be calling him “ex,” since he’s so into another girl. But she doesn’t have time to be mad or even jealous, because someone has to save the world from the upcoming apocalypse, and it looks like that’s going to be Gia.

Maybe. If she survives.

Behind the Book: The Billionaire's Runaway Fiancée by Jenna Bayley-Burke

I’ve always had a thing for romantic relationships that grow out of friendships. I love books, movie…