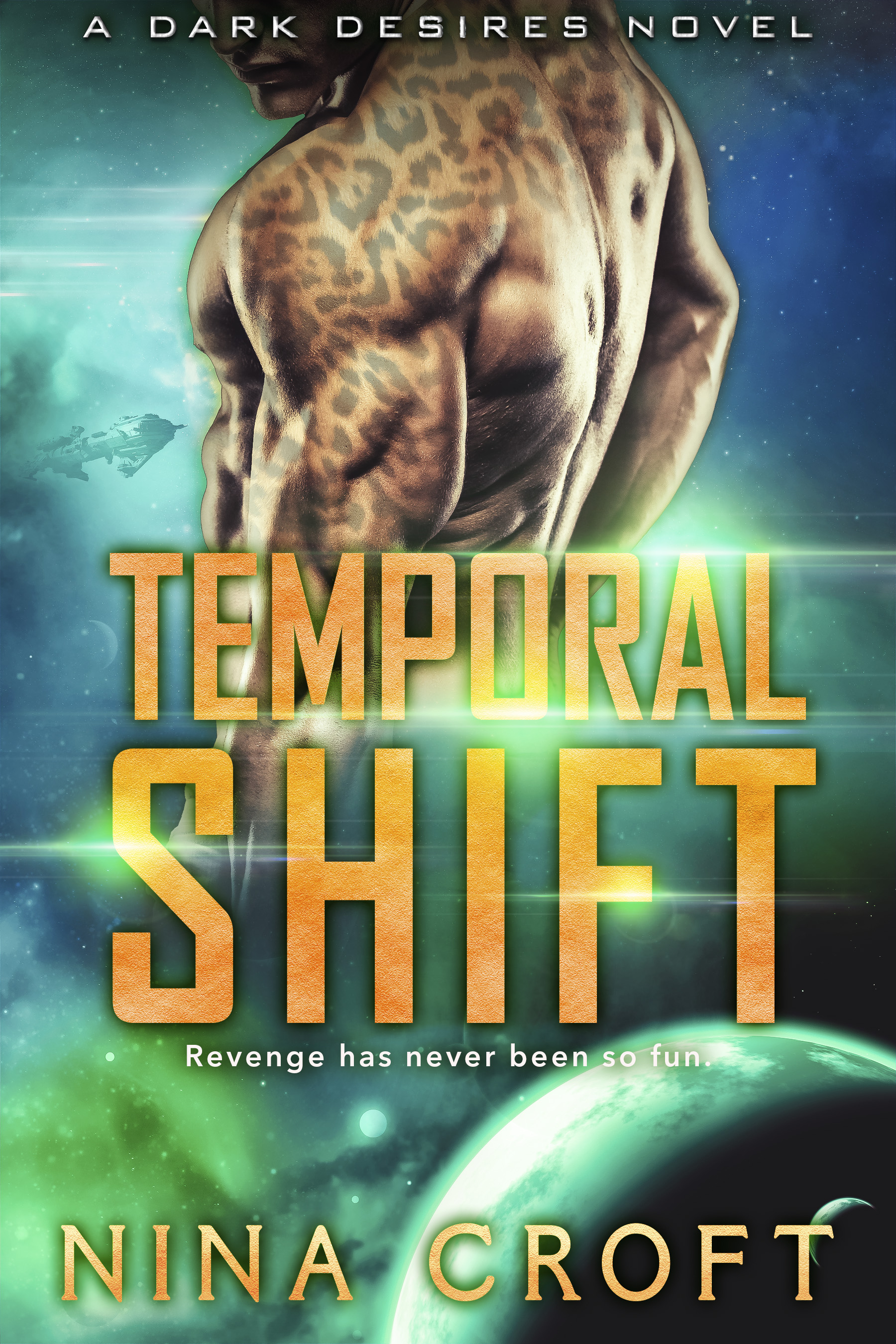 Nina Croft week is winding down, but the fun isn’t over yet! Today we’re sharing a bonus scene from book four in the Dark Desires series, Temporal Shift, which is currently on sale for just $1.99 for a limited time only! (And in case you missed the beginning of our week-long celebration, check out posts one, two, and three now!)

A note from Nina:

In the original manuscript of Temporal Shift, book 4 in my Dark Desires series, Saffira, my heroine, is trapped on Earth for 500 years. While these years are not actually written about in the book, I thought it would be nice to give an idea of how they changed Saffira by sharing excerpts from her diary.

Random excerpts from the diary of Saffira Lourdes…

I had sex, today. I won’t call it making love—I’ll not make love with anyone but Devlin. But it occurred to me that maybe I should get a little practice. And I felt guilty the whole time. Unfaithful to a man who won’t even be born for another fifteen hundred years. And who didn’t even have the decency to fall in love with me when he had the chance.

I wanted a shower afterward and I’m going to have to wait a long time—like a few hundred years. Perhaps I could invent the shower… Indoor plumbing is one of the things I mess the most…how pathetic is that?

We limped into Boston harbor. Between the scurvy and the pirates, we’re down to about half of us that set sail. But—hurray—I’m in the new world. One step closer to my goal. Though I have to say the new world doesn’t look much better than the old one and the stench drifting off from the land…Ugh! All the same, I can’t wait to get off this ship, onto dry land, and away from all these people. I’ve discovered that I’m not really a people person. I think I prefer rats. But being on a ship again brings back memories of another ship, The Blood Hunter…and ice cream.

I have just watched a woman hanged as a witch and the “good” people of Salem enjoying the spectacle. Her name was Bridget Bishop. It took me back to that first night and the woman they burned. Her screams still haunt me. Two hundred years and it seems they have learned nothing.

Today, I bit my tongue—Thorne would be proud of me—to stop myself from screaming at them that they were stupid ignorant peasants. Because then, I would no doubt be next on the gallows, and I can’t risk that because I have a high and lofty destiny. To save mankind.

Hah, perhaps not so lofty after all. The conviction is creeping up on me that perhaps mankind doesn’t deserve to be saved.

Many times, I have despaired of human nature but today I rejoiced. It renewed my faith a little—though not enough to turn me from my course. I traveled to the Kill Devil Hills and watched from a distance as men flew for the first time. Not for long and not very high, but it’s a start. This is the day that really sets humanity on a course for the stars.

Sometimes I hate the human race. If I could fly away today and forget them all I would. Unfortunately, I can think of no way and so must stick with my plan.

I wish Doctor Who was real.

I would so get in his Tardis and ask him to fly away with me… anywhere, anytime…

I’ve had so many lives, moving on before it became obvious that I wasn’t quite…normal. I’ve been Sally, Saffron, Sarah…

But this is my last life, and with a little luck (and a hell of a lot of hard work) it will be a long one. So once again, for the first time in more than five hundred years, I will be Saffira Lourdes. Of course, my birth isn’t quite typical as I’m coming into this world at the age of eighteen (well according to the paperwork) and today I enter the seminary. I’ve considered the various options and this seems my best chance of success And I wasn’t even vaguely swayed by imagining Devlin’s reaction to my up and coming ordainment…honest!

Today, they started building the Trakis One. It’s really happening. I went along with President Asshole (if I survive the next few years in his company, I will deserve a sainthood) to witness the first day of work, and even his presence couldn’t dampen my excitement. My ticket out of here.

To think how many nights I spent staring up into space at the Trakis One. Wondering where she came from, who had flown in her. If all goes well, that will be me. But it seems inconceivable that I was up there all that time. Floating above my younger self. Dreaming.

Maybe I wasn’t. There is still so much that could go wrong.

Today we leave Earth and last night I dreamed of Devlin. I haven’t thought about him in so long (a little white lie, but honestly hardly ever and mostly I think things like—what a bastard!)

In my dream, I watch him sleeping. He’s so beautiful it actually hurts to breathe. I never saw him sleeping. Then he opened his eyes and I got the shock of my long life—almost woke me up because they were the deep inhuman violet of the others. I tried to remember if they had ever been that way before—I think I would have noticed.

But after all, it was no vision of the future. Only a dream. And everyone knows dreams don’t come true.

I wonder, will I dream of him again in the long sleep to come.

Caught between destiny and desire…

After diving into a black hole in search of the source of Meridian, the key to immortality, the crew of the Blood Hunter finds themselves stranded in an alternate universe.

Engineer Devlin Stark doesn’t want immortality. He just wants to live long enough to get his revenge on the man who murdered his brother. Now, he’s trapped in a strange world with a crazy woman who claims he’s fated to be her lover.

Saffira Lourdes has a destiny: to save humanity and lead her exiled people to the Promised Land. Haunted by visions of the past and future, she’s been sustained through the years by a dream lover. Unfortunately, Devlin doesn’t believe in fate. But it’s obvious there’s a connection between them, one that will soon be tested by the limits of time and space. Saffira is about to make the crew of the Blood Hunter an offer they’ll find impossible to refuse.

They’re heading back to Earth, and they’re going back in time…

Behind the Book: Believe by Katie Delahanty

The #daemoininvasion is kicking off today! Street teamers, here are your first Tasks!   Tell yo…

Ask any two people what the best paranormal shows are on television, and you’ll likely get two diffe…

Whenever I can, I set my contemporary romances in Canada, because…well. Canada …