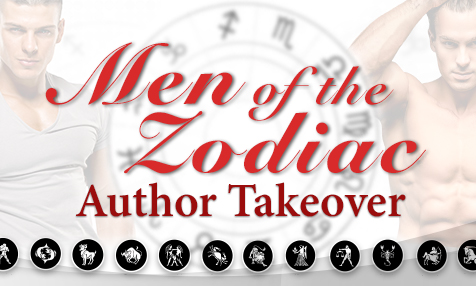 Join us in welcoming Men of the Zodiac and The Millionaire’s Deception author Wendy Byrne with a special guest post featuring sexy Taurus Rafe McCall!

Now that I have your attention, meet Rafe McCall. He’s the hero in my book The Millionaire’s Deception. True to his Taurus sign he’s a take-charge guy and doesn’t take no for an answer. But after he walks into Crossroad Café, life will never be the same for him or Francesca (Frankie).

Frankie peeked out the window and spotted the Harley parked in front and couldn’t decide if she was disappointed or intrigued. A steamy hunk of bad boy was not what she needed in her life right now. But it looked as if she didn’t have much choice when he ambled inside and gave her a panty-melting smile.

The Taurus man’s stubborn streak is legendary. But that also makes him very successful in business. He doesn’t give up until he gets what he’s after. Unfortunately Frankie stands in the way of Rafe taking care of business.

They didn’t call Rafe “the Closer” for nothing. He got paid for getting the job done, and gobbling up this town and its picturesque setting along the Mississippi was part of the plan. A cool six million was his take for getting Frankie to accept the offer.

Either through circumstances of his birth or true to his astrological sign of Taurus, he was stubborn and determined in everything he undertook. He wouldn’t give up until he had her signature on the contract.

The Taurus man leans towards being the possessive type. But don’t try to make him jealous, because that could spell disaster. He’s passionate with a healthy doze of mystery. Although he presents himself as the strong silent type, he’s really analyzing the situation. Taurus men love structure and routine and have enormous amounts of patience.

But Frankie has strength as well as she leads the charge to fight against selling out to Probst—the people Rafe works for.

Frankie sucked in the corner of her lip and all sorts of X-rated fantasies whispered through his brain. Wow, he needed to get his mind in control on this assignment.

“Small towns are like that. You can’t get away with anything without everybody knowing about it. Gossiping is part of the culture.” She gave him a mischievous smile. “Like right now the book club ladies in the corner no doubt have stopped focusing on the finer points of Fifty Shades of Grey and have homed in on why I’m spending so much time talking to you. The next logical conclusion they’ll come to is that we’ll be doing it on the back of your Harley by the end of the night, with me wearing nothing but a striped necktie.”

He choked on the coffee he’d just swallowed. For the first time in nearly ten years, words failed him. No doubt because the visual she’d described was way too tempting to dismiss. He shook off the thoughts, albeit reluctantly. “So that’s what little old ladies do in their spare time—talk about sex? And here I thought it was gardening.”

“They’re all widowed and alone and like to relive the good old days. And unfortunately for me, also seem to be fixating on my love life by finding me a man.” She tsked. “Pay them no mind. They mean well.”

“Don’t look now, but one of them is headed our way.”

She brushed an errant chunk of hair away from her eyes. “Oh crap. I knew I stayed here too long. What does she look like?”

“That’s Louisa. Don’t take the bait if she asks you if you like sex toys.” She shook her head.

He coughed. “Did you say sex toys?”

Taurus men love the art of seduction, long slow passionate kisses, candlelight and soft music. They are naturally sensual people who enjoy tactile stimulation so prepare to be seduced by a master.

He tilted his head and smiled. “I changed my mind. So do you like kissing?”

His lips inched slowly into a smile. “I agree. There’s the simple locking of lips. A peck that might or might not lead to more.” To illustrate his point, he slid his lips along hers. “Nice, but noncommittal.”

“Yep.” She finally managed to get the word out while her brain cells seemed to disappear by the second.

“Then there’s the longer kiss, involving years of practice to develop the right amount of technique, and, of course, the requisite tongue to bring it to the next level.”

Although she’d prepared herself, when he swooped in, she could have sworn her heart stopped. The sensation she’d convinced herself she’d imagined was right back at her with a force that made her nearly weep. She’d die a happy woman if this were the last moment of her life.

Hope you enjoyed learning a little about the Taurus man and reading some snippets from The Millionaire’s Deception. And did I mention Rafe has a twin brother Luke? His story is out in November and called The Millionaire’s Revenge.

Best love matches for a Taurus—Cancer, Capricorn and Pisces

THE MEN OF THE ZODIAC Bundle is on sale for only $0.99 for a limited time!

About the boxed set:

Success, power, and money…these men have it all. Whether you swoon for a crowned prince, melt for a real estate mogul, or get hot and bothered over a self-made powerhouse, the Men of Zodiac bundle will indulge all of your fantasies.

The Millionaire’s Deception by Wendy Byrne

One Night with the Billionaire by Sarah Balance

Her Sworn Enemy by Theresa Meyers