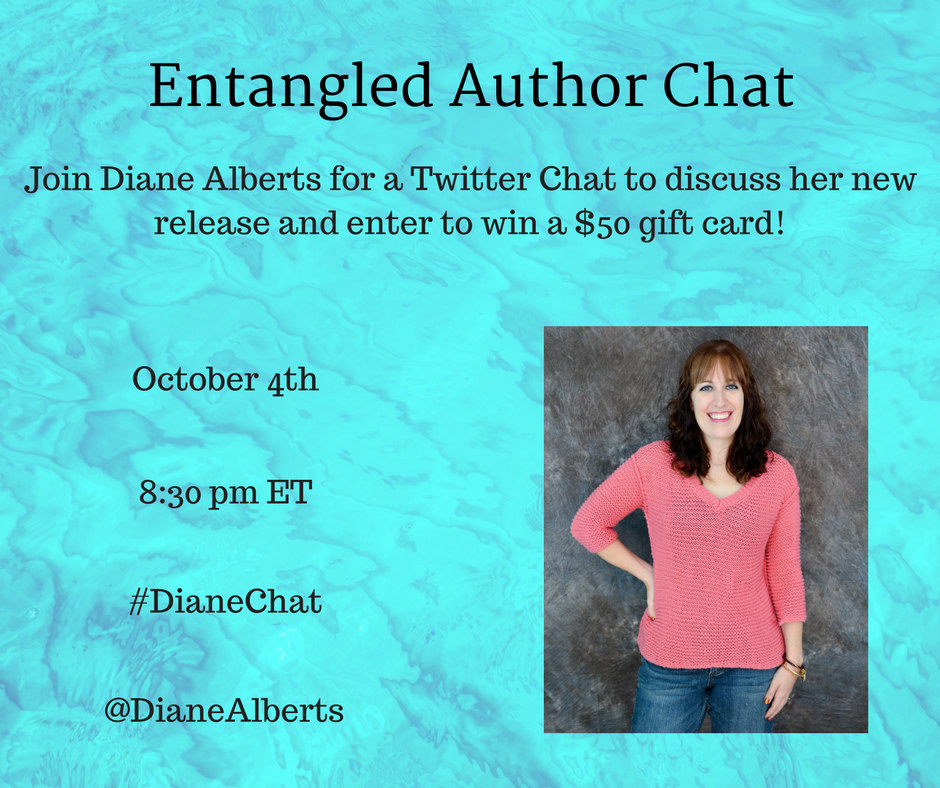 You’re invited to join the live Twitter Chat with @DianeAlberts tonight (Tuesday, October 4th) at 8:30PM EST! To participate and follow along, use #DianeChat . Don’t miss your chance to win a $50 Amazon Gift Card!

We would love for you to join us for a live Twitter Chat (#DianeChat) with USA TODAY Bestselling Author Diane Alberts! Diane will be sharing all of the juicy details related to her new release, His Best Mistake, which is book six in the Shillings Agency series from Entangled Brazen. Below are some of the exciting questions we will be asking Diane, but please feel free to pose your own questions!
1 – What was your inspiration for writing two characters who had suffered similar tragedies – and were supposed to heal each other?
2 – What is your favorite character trait of both Daisy and Mark?
3 – Have you ever given a code name for a guy you liked? If so, what was his code name?
4 – What kind of drink do you prefer? Pink and bubbly cosmos, or no nonsense whiskey?
5 – What is next for the Shillings Agency?
6 – Who is your favorite Shillings couple?
7 – Which Shillings heroine are you most like? Which hero?
8 – Where did Kyla adn Cooper go on their honeymoon? Did they fly?
9 – How’s Gordon doing, being married to a princess?

About His Best Mistake:

One night with a stranger…

Security expert Mark Matthews has loved, and lost, and has no intention of ever loving again—especially not a woman who thrives on her life being in danger. Now, hot, meaningless sex with strangers he had no intention of ever seeing again? That’s a whole other story. And it’s all life as a single father allows him to enjoy. But when he meets a woman who refuses to tell him her real name, the game is on, because she’s everything he swore to stay away from. Daisy O’Rourke has bad idea written all over her, but he’s in too deep to walk away now…

Behind the Book: The Billionaire Fiancés Boxed Set with Carmen Falcone

By Meredith Johnson on September 9, 2019