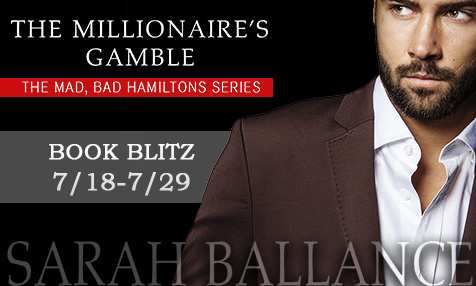 Looking for a fun, sassy, and steamy read? Check out the The Millionaire’s Gamble by Sarah Ballance, available now! Follow the tour!

He wants the one thing she promises he’ll never have …

Wealth has a price. Everyone wants something from you. For one woman, that something was my DNA. One minute, she was kissing me like we were going to strip it down and go at it. And the next, she was ripping out my hair for a paternity test—and threatening to torpedo my latest deal. I don’t play these kind of games. And that damnably sexy woman with the alluring eyes and mistaken agenda is about to learn that the hard way…

Millionaire scion Jagger Hamilton didn’t father Kennedy Price’s nephew. That doesn’t mean he can’t use the situation to his advantage. She wants him to take a paternity test. He wants her in his bed.

She’s blackmailing him, and she’s playing dirty. He could try to use the famous Hamilton charm to turn her into a powerful ally… But she makes him feel… Way. Too. Much.

Kennedy Price isn’t asking much. Just for the powerful, sinfully hot, and notorious playboy to be a decent human being. But he’s used to using that filthy, sensual mouth for getting what he wants.

And he wants her.

She’s determined not to fall for him. But there’s no avoiding his charisma, or his bed, where she threatens to lose more than the standoff between them. She just might lose her heart.

Six Month Rule by A.J. Pine, Behind the Book

Making sugar cookies for Christmas has been a tradition in my family since long before I was born. T…

My #MusicMonday inspire me and keep on inspiring me through a variety of books – listen on, r…