I became fascinated with the notion of look-alikes or doppelgangers when, at the tender age of 13, I read “The Scapegoat” by Daphne DuMaurier. In the story a cruel French aristocrat and a mild-mannered British school teacher run into each other in a small French inn and, recognizing they are identical, enjoy dinner together. At some point they trade clothes, and they drink too much, and the school teacher passes out. The next morning the school teacher is mistaken for the Comte and born off to the family chateau. Thus begins the adventure.

What I loved most about the story how much one could learn about someone just by stepping into their lives for a brief time. We don’t see much of the Comte, but by the end of the book we know everything about him, even the darkness living in his soul. The other characters tell us everything we need to know just by the way they relate to him.

None of us will ever find a doppelganger to trade places with, and even if we could, would we want someone else sleeping with our spouse, raising our children or spending our money. Probably not. But sometimes, when I’ve had a rough day, I wouldn’t mind living another life just for a week or two—especially if it involved a French chateau.

So many of us feel buffeted by life, it’s hard to recognize that the contours of our lives fit the contours of our character. But I believe it’s true. I have met twins I could not tell apart…until I got to know them. Then it was easy because I could see their personalities in their eyes and their faces and their gestures, in what was working in their lives and what wasn’t.

The genetic code that determines the shape of a face or the length of a bone or texture of hair is like a blank canvas stretched across the wood frame. Then life begins painting the portrait that becomes us. Eventually, it lines our faces, twists our joints and washes the color from our hair. At the end of our lives, when we look into the mirror, the face we see will not be like anyone else’s.

So much for reality.

I am still fascinated by doppelgangers. In fact, doppelgangers inspired my newest romantic suspense, Stranger in My House. Two identical half-sisters temporarily trade places. It was so much fun to write, especially at the beginning when the heroine, Kirby, takes on her half-sister Frankie’s identity to search for Frankie’s missing mother. The contours of Frankie’s life gradually become visible through the other characters living on a sprawling Texas ranch with Frankie. Each character provides a slightly different perspectives on Frankie.

Frankie’s uncle drops Buddhist wisdom on Kirby, the housekeeper hates her, the handsome ranch manager runs hot and cold, one minute coming on to her, the next pushing her away. By the end of the book, Kirby is able to piece together a complete and fascinating portrait of Frankie. I hope readers will be able to build a portrait of Frankie right along with Kirby. 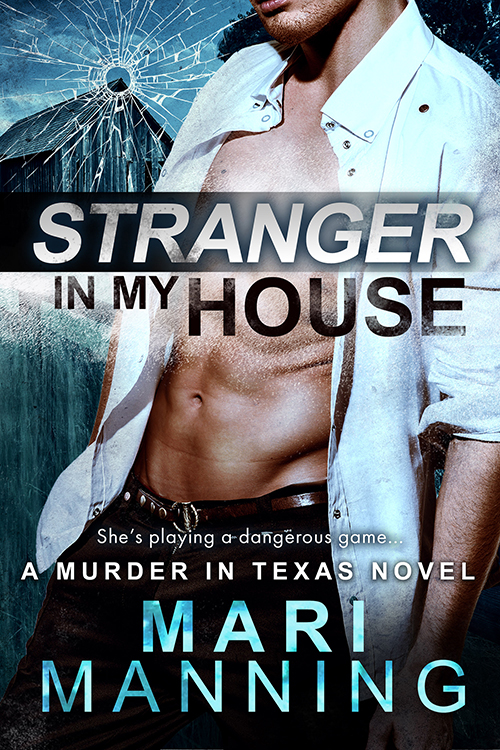 When Kirby Swallow assumes her half sister’s identity to help figure out who’s threatening her, she finds herself in way over her head. On the remote Texas ranch her sister calls home, she confronts a growing list of suspects and a rising body count—all while wearing her sister’s 4-inch heels. The only problem is the sexy ranch manager, Seth Maguire, is starting to catch on to the charade. The attraction between them is undeniable—and soon, what starts out as just a one-night stand, turns into something much deeper. But someone on the ranch is out for blood…and Kirby’s next.

Let’s start with the fun stuff. I love small towns, mysteries, quiet men, laughter, old-fashioned spaghetti dinners. I love boots and shopping and jokes and Hershey’s dark chocolate and white wine. I love lots of things. But my first love is reading.

I love to read. Just about anything, but it has to be well-written. I go through periods where I am into historical novels or romance or mystery or history or biography. I never know when my desires will suddenly change.

Now for the writer-ish, official stuff: Mari Manning is the author of several contemporary romances and three romantic suspense novels set in the Texas Hill Country. Stranger at My Door is the first in her A Murder in Teas series. The second, Stranger in My House will be released by Entangled on June 13. The third book in the series is Stranger in My Bed. Currently Mari is working on a series of cozy mysteries.

She and her husband live in Chicago.

A Man of Honor by Miranda Liasson Blog Tour

When I’m on a deadline via GIPHY   When my kids won’t leave me alone, but I’ve got writing to d…

Hey there – First off, everyone’s writing process is different, so some writers need silence.…

Live to Dream! It’s a great motto–especially if you have dreams like Meghan Bradford in …